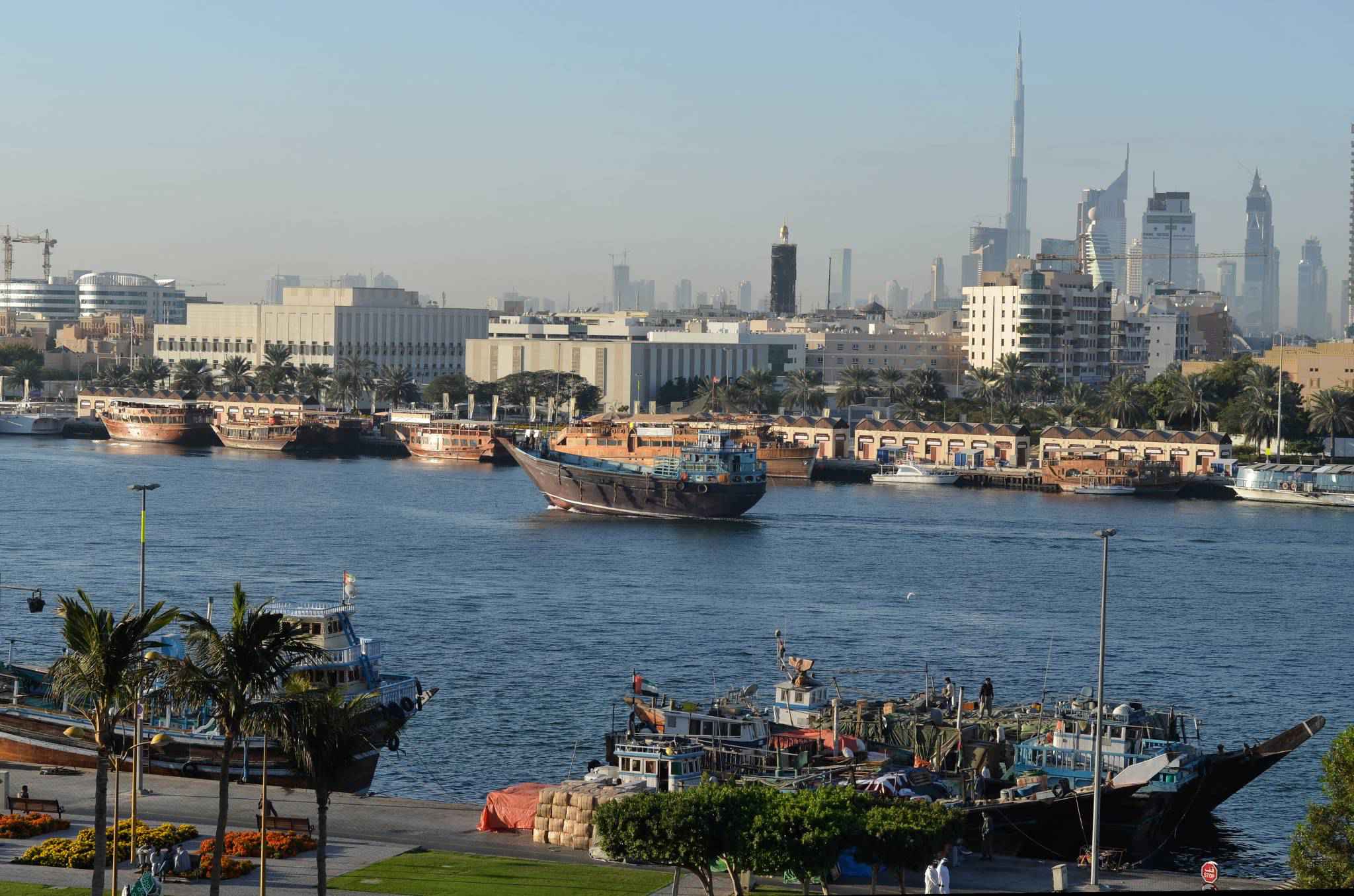 Dubai Creek is a saltwater creek located in Dubai, United Arab Emirates . It ends at Ras Al Khor Wildlife Sanctuary. Some sources say that the creek extended as far inland as Al Ain, and that the Ancient Greeks called it River Zara.

History
Historically, the creek divided the city into two main sections – Deira and Bur Dubai. It was along the Bur Dubai creek area that members of the Bani Yas tribe first settled in the 19th century, establishing the Al Maktoum dynasty in the city. In the early 20th century, the creek, though incapable then of supporting large scale transportation, served as a minor port for dhows coming as far away as India or East Africa. Although it impeded the entry of ships due to current flow, the creek remained an important element in establishing the commercial position of Dubai, being the only port or harbour in the city. Dubai's pearling industry, which formed the main sector of the city's economy, was based primarily on expeditions in the creek, prior to the invention of cultured pearls in the 1930s.

Fishing, also an important industry at the time, was also based along the creek, whose warm and shallow waters supported a wide variety of marine life. Dhows used for purposes of fishing were also built on the foreshore of the creek. The importance of the creek as a site of commercial activity was a justification to introduce improvements to allow larger vessels to transit, as well as to facilitate loading and unloading activities. This led, in 1955, to a plan to develop the creek, which involved dredging shallow areas, building of breakwaters, and developing its beach to become a quay suitable for loading and unloading of cargo. The creek was first dredged in 1961 to permit 7-foot (2.1 m) draft vessels to cross through the creek at all times. The creek was dredged again in the 1960s and 1970s so that it could offer anchorage for local and coastal shipping of up to about 500 tons. The dredging opened up the creek to much more continuous traffic of merchandise, including the development of re-export, and gave Dubai an advantage over Sharjah, the other dominant trading centre in the region at the time.Al Maktoum Bridge, the first bridge connecting Bur Dubai and Deira was constructed in 1963. Although the importance of the creek as a port has diminished with the development of the Jebel Ali Port, smaller facilities, such as Port Saeed, continue to exist along the creek, providing porting to traders from the region and the subcontinent.

Including the most remarkable buildings alongside the Deira side of the Creek are the Deira Twin Towers, Dubai Creek Tower, Sheraton Dubai Creek, National Bank, and Chamber of Commerce. On the other side of Al Maktoum Bridge along Dubai Creek is Dubai Creek Park, one of the largest parks in Dubai.

The creek is also home to the Dubai Creek Golf & Yacht Club, comprising an 18-hole tournament golf course, clubhouses, residential development and the Park Hyatt hotel.
The creek's initial inlet into mainland Dubai is along the Deira Corniche and Al Ras areas of eastern Dubai and along the Al Shindagha area of western Dubai. It then progresses south-eastward through the mainland, passing through Port Saeed and Dubai Creek Park. The creek's natural ending is at the Ras Al Khor Wildlife Sanctuary, 14 kilometres (8.7 mi) from its origin at the Persian Gulf. The traditional form of transport between the eastern and western sections of Dubai via the creek was through abras, which continue to operate in Dubai. In addition, the eastern and western sections are linked via four bridges (Al Maktoum Bridge, Al Garhoud Bridge, Business Bay Crossing, and Floating Bridge) and one tunnel (Al Shindagha Tunnel). 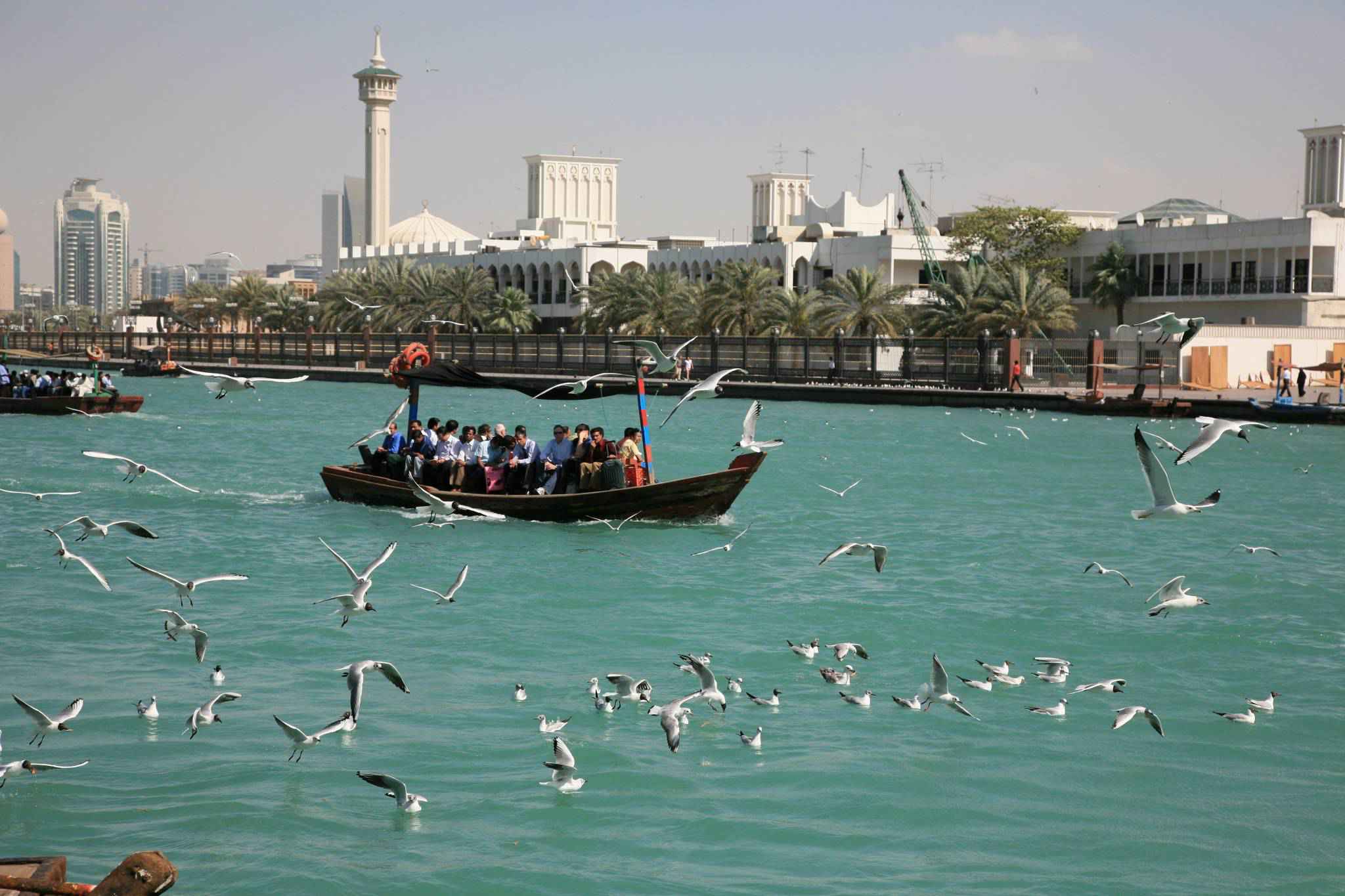