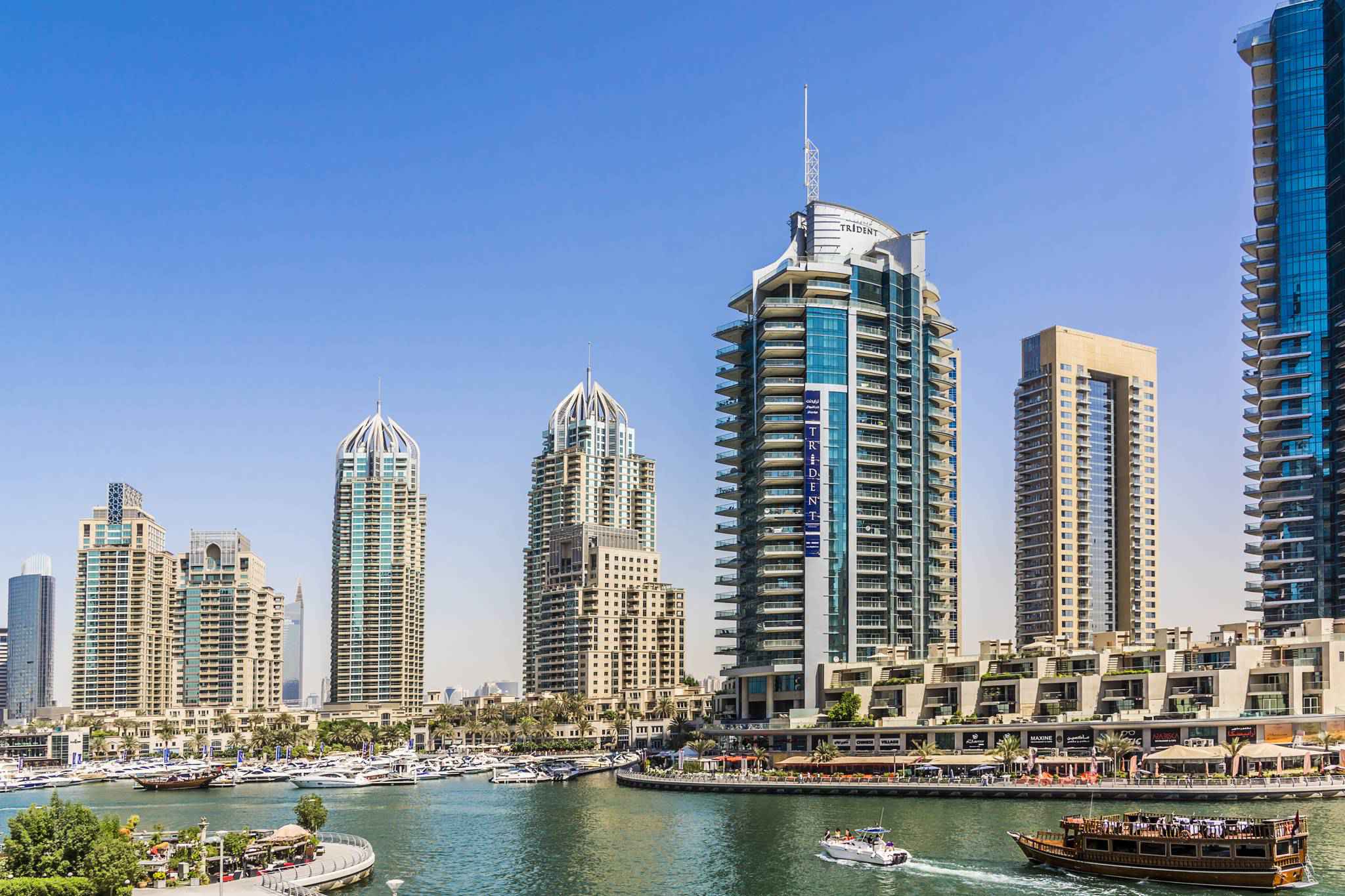 Dubai Marina is a district in Dubai, United Arab Emirates. Dubai Marina is an artificial canal city, built along a two-mile (3 km) stretch of Persian Gulf shoreline. When the entire development is complete, it will accommodate more than 120,000 people in residential towers and villas. It is located on Interchange 5 between Jebel Ali Port and the area which hosts Dubai Internet City, Dubai Media City, and the American University in Dubai. The first phase of this project has been completed. Dubai Marina was inspired by the Concord Pacific Place development along False Creek in Vancouver, BC, Canada.

There have been many instances of marine wildlife (especially whales and sharks) entering the lake, because of its proximity to the open sea.

Jumeirah Beach Residence
Jumeirah Beach Residence is a 1.7 kilometres (1.1 mi) long, 2 square kilometres (0.77 sq mi) gross floor area waterfront community located against the Persian Gulf in Dubai Marina. It is the largest single phase residential development in the world and contains 40 towers (35 are residential and 5 are hotels). JBR can accommodate about 15,000 people, living in its apartments and hotel rooms. The Project has 6,917 apartments, from 900 sq ft (84 m2) studios to 5,500 sq ft (510 m2) penthouses. Jumeirah Beach Residence was launched in August 2002 from the developer, Dubai Properties (a subsidiary of Dubai Holding) with the cost of 6 billion dirham and was completed in 2007. The Walk at JBR restaurant and shopping strip, which is adjacent to the beach behind JBR, is a very popular location for Al Fresco dining. There are five hotels, rated as 5 star or 4 star, three of which are purpose-built hotels, while the other two are converted residential towers.

The Walk
The Walk at Jumeirah Beach Residence is a 1.7-kilometre strip at the ground and plaza level of the complex, it was developed by Dubai Properties, and was completed by 2007 and opened officially in August 2008. currently there are around 330 occupants at The Walk, including restaurants, clothing stores, boutiques, department stores, cafes and gyms, located over two levels Ground and Plaza.

The Beach
The Beach at Jumeirah Beach Residence is a retail complex being constructed on the beach in front of JBR by Meraas Holding, a company owned by Sheikh Mohammed bin Rashid Al Maktoum, Vice-President and Prime Minister of the UAE and Ruler of Dubai. The development, comprising four plazas, will occupy the bulk of the beach between the Hilton and Sheraton hotels. The complex houses a number of levels of parking as well as seventy retail and food and beverage outlets, together with entertainment facilities.

Al Sahab
Al Sahab is a waterfront twin tower which directly overlooks the largest bay of water at Dubai Marina. From the level three Marina homes upwards, all residents have views over Dubai Marina. Its developed by Emaar and considered to be Dubai Marinas most premium tower. It benefits from the highest price per sq ft in Dubai.

Marina Quays
Marina Quays is 20 meters long, over the water on the waterfront. Along with apartments and villas,the development has shops and other outlets. Marina Quays is a three-building residential development; the buildings are Quay East, Quay West and Quay North.

Park Island
Park Island is a four tower residential development comprising Blakely, Bonaire, Fairfield and Sanibel. The towers within Park Island have been placed with parks and landscaped gardens.

Dubai Marina Mall comprises a mix of tenants including a supermarket, an entertainment area for children, shops and a six-screen Reel Cinemas.

Dubai Tramway
Al Sufouh Tramway is a tramway being built in Al Sufouh, Dubai Marina. It will run 14.5 kilometres (9.0 mi) along Al Sufouh Road from Dubai Marina to the Burj Al Arab and the Mall of the Emirates. It is expected to interchange with three stations of Dubai Metro's Red Line. The Sufouh Tram will also connect with the monorail of the Palm Jumeirah at the entrance of the Palm from Sufouh Road. 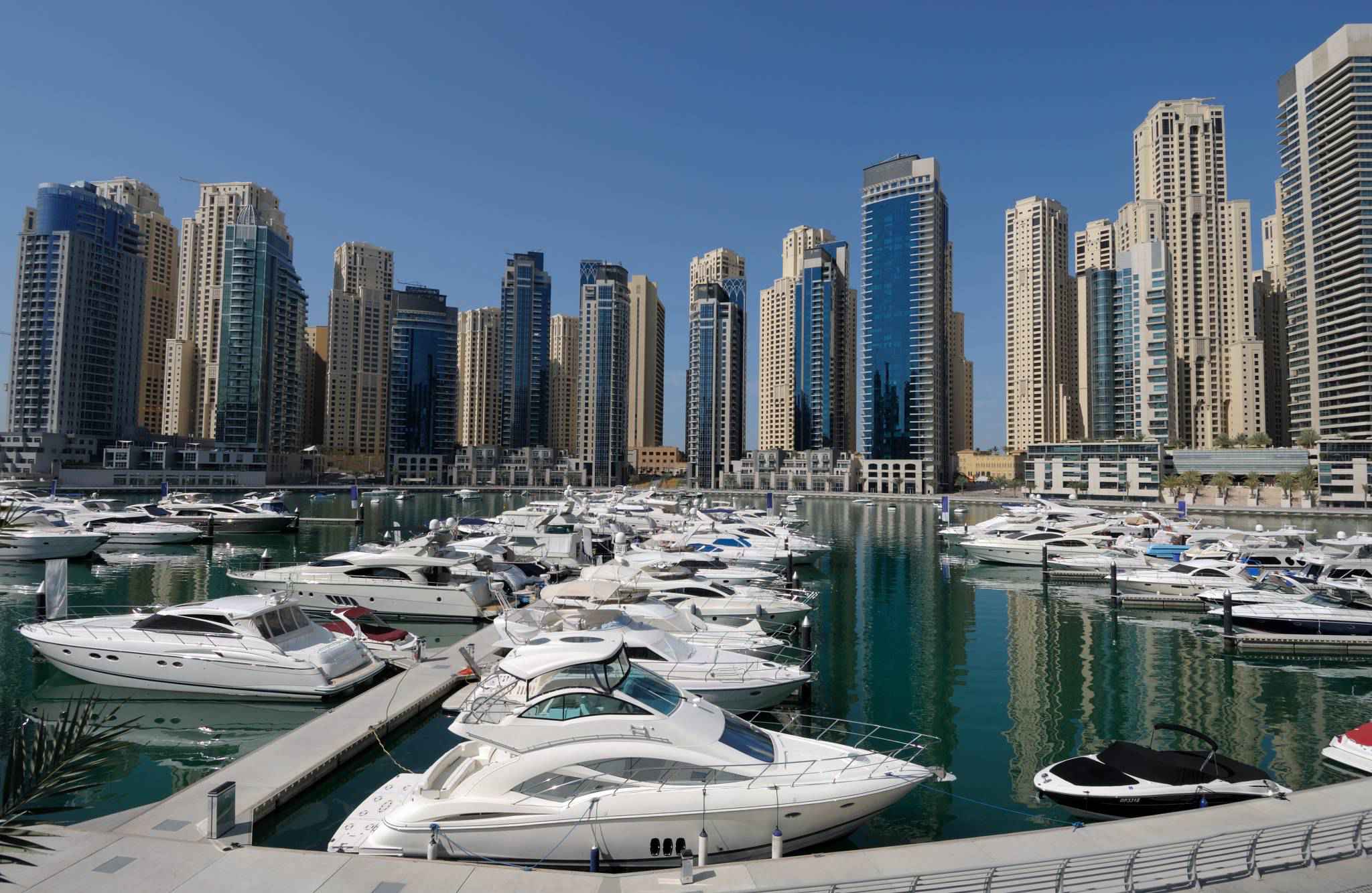