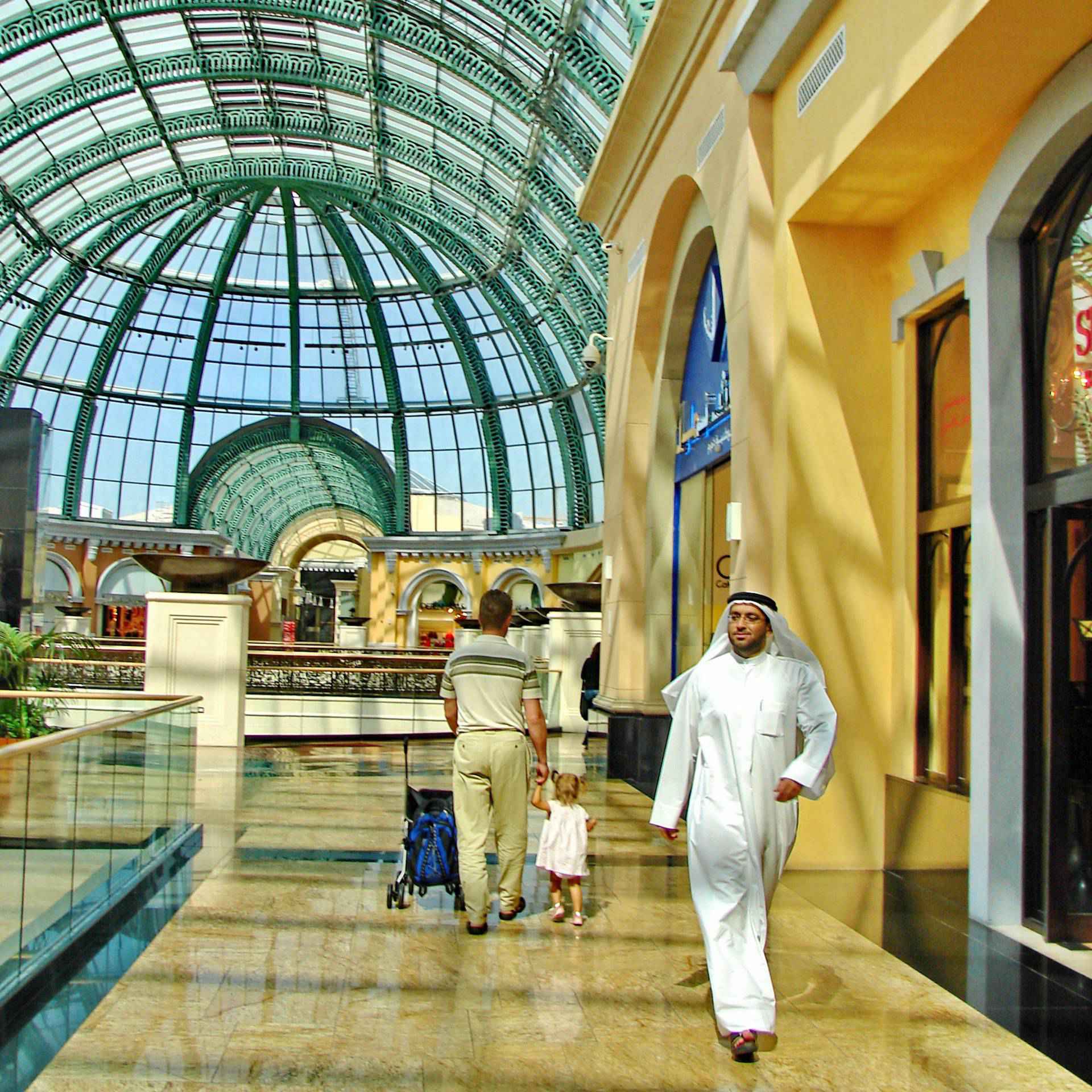 The Dubai Mall is a shopping mall in Dubai and the largest mall in the world by total area. Along with West Edmonton Mall in Canada, it is the nineteenth largest shopping mall in the world by gross leasable area. Located in Dubai, United Arab Emirates, it is part of the 20-billion-dollar Downtown complex, and includes 1,200 shops. In 2011 it was the most visited building on the planet, attracting over 54 million visitors. Access to the mall is provided via Doha Street, rebuilt as a double-decker road in April 2009.
Twice delayed, Dubai Mall opened on 4th November 2008, with about 1000 retailers, marking the world's second largest-ever mall opening in retail history behind West Edmonton Mall. However it is not the largest in gross leasable space, and is surpassed in that category by several malls including the New South China Mall, which is the world's largest, albeit largely derelict, Golden Resources Mall, SM City North Edsa, and SM Mall of Asia.

It also has a 250-room luxury hotel, 22 cinema screens plus 120 restaurants and cafes. The Mall has over 14,000 parking spaces across 3 car parks, with valet services and a car locator ticketing system. The mall has won five awards – two awards at the Retail Future Project Awards at Mapic, Cannes, in 2004, for Best Retail Development Scheme (Large) and Best Use of Lighting in a Retail Environment and the Dubai Mall brochure collected three awards at the Summit Creative Awards 2005 in Portland, Oregon – the Gold award for Best Art Direction / Graphic Design, Silver award for Best 4-colour B2B Brochure, and a Judges Special Recognition award.

Its 270-degree acrylic walk-through tunnel lets visitors see a variety of underwater animals up close. A special 'lunar-cyclic' lighting system changes the ambience of the tank depending on the time of day.

The Underwater Zoo is located above the aquarium, and provides an interactive approach to educating children and visitors on the ecology and sustainability of marine life. The journey consists of three ecological zones: Rainforest, Rocky Shore, and Living Ocean, each of which features a variety of aquatic animals including penguins, crocodiles, piranhas, giant spider crabs, water rats, sea horses, and jellyfish amongst others.

Managed by Emaar Entertainment, the rink is the place-to-go for ice skating in Dubai, and host a variety of international, competition-standard events. The rink can also be converted to a multi-purpose hall with a capacity of up to 2,000 guests, featuring a 20x10m LED display.

The Dubai Ice Rink provides professional ice skating lessons and caters to most ages through its Learn-to-Skate programme. It also has lessons for figure skating, ice hockey, Disco, and Mega Skate sessions.

SEGA Republic
SEGA Republic, a 76,000 sq ft (7,100 m2) indoor theme park, was opened on 21 August 2009 where visitors can enjoy over 150 amusement games. It is a park that is mainly dedicated to SEGA's video game icon Sonic the Hedgehog.

The park includes ‘Lazeraze’, a laser maze, as well as ‘Racer’ Bumper Cars. It also features a "soft play area" for smaller children.

KidZania
KidZania® is an award-winning children’s ‘edutainment’ concept, in The Dubai Mall, introduced to the Middle East through an exclusive partnership with Emaar Entertainment LLC.

An 80,000 sq ft interactive mini-city, KidZania allows kids to play and learn by mimicking activities traditionally done by adults in real life. As in the real world, children perform “jobs” and are either paid for their work or pay to shop or be entertained.

The indoor edutainment centre is built to scale for children, and accurately reflects the workings of a typical city.

KidZania maintains a high ratio of staff to children for safety and to improve the overall experience. In addition, kids wear RFID wristbands that keep track of their activities and whereabouts, reassuring parents on the safety of their children.

Reel Cinemas
Reel Cinemas is a 22-screen cinema, also managed by Emaar Entertainment, in The Dubai Mall. It boasts ergonomically designed seats, increased legroom, and an advanced projection and AV system as standard.

One of the largest theaters in the region, the megaplex features four luxury cinema suites and 17 commercial halls, including the first THX-certified cinema in Dubai.

Rainforest Cafe
The Dubai Mall is home to one of the newest Rainforest Cafe locations. It faces the aquarium and is made to emulate tropical ruins with moving ruins and light shows, which are only found at this location.

Metro Link
In December 2012, Emaar Properties have announced the completion of the Metro Link which is a 820 m long elevated, air-conditioned footbridge that connects Burj Khalifa/The Dubai Mall Metro Station to the Dubai Mall. 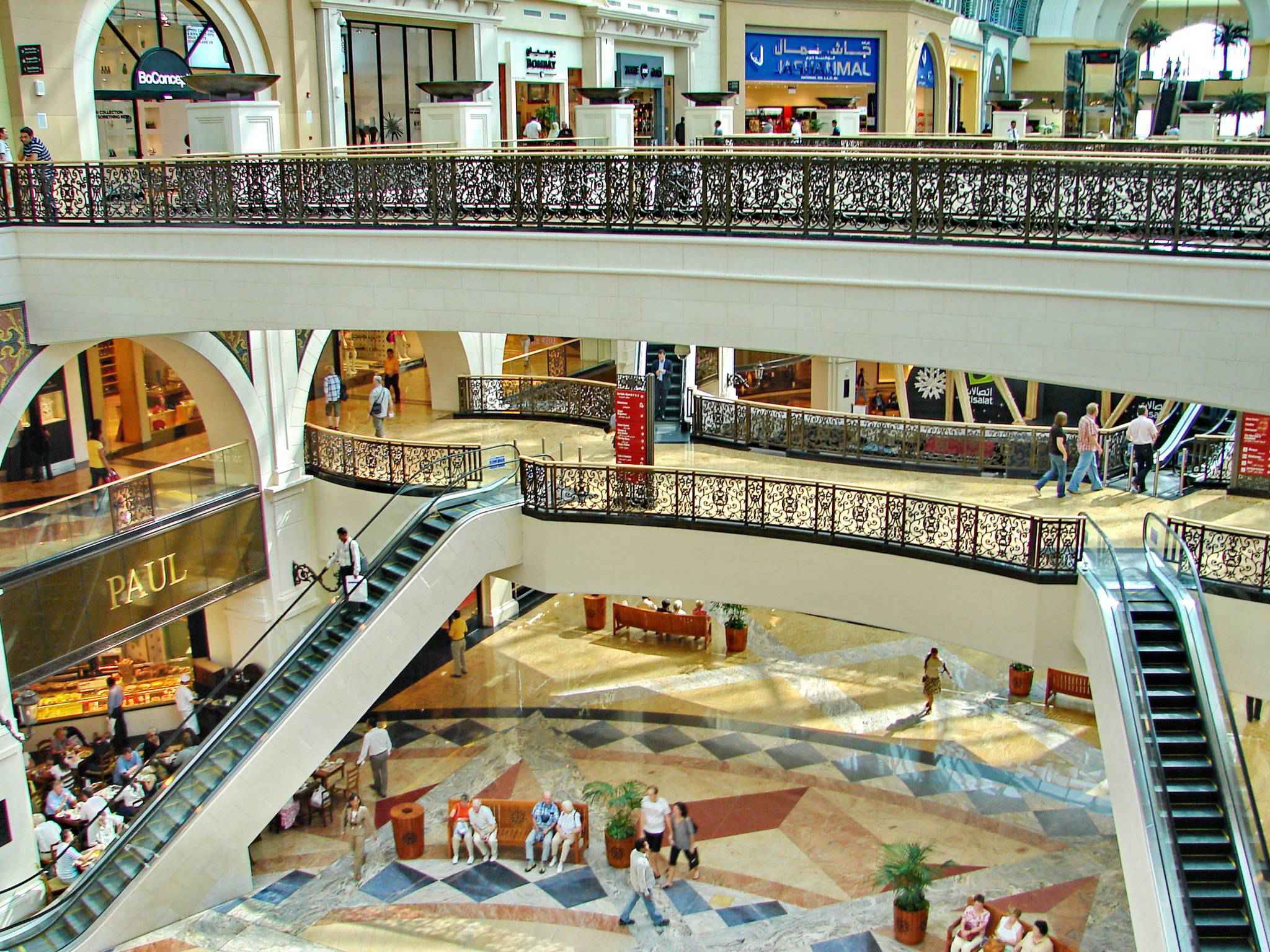