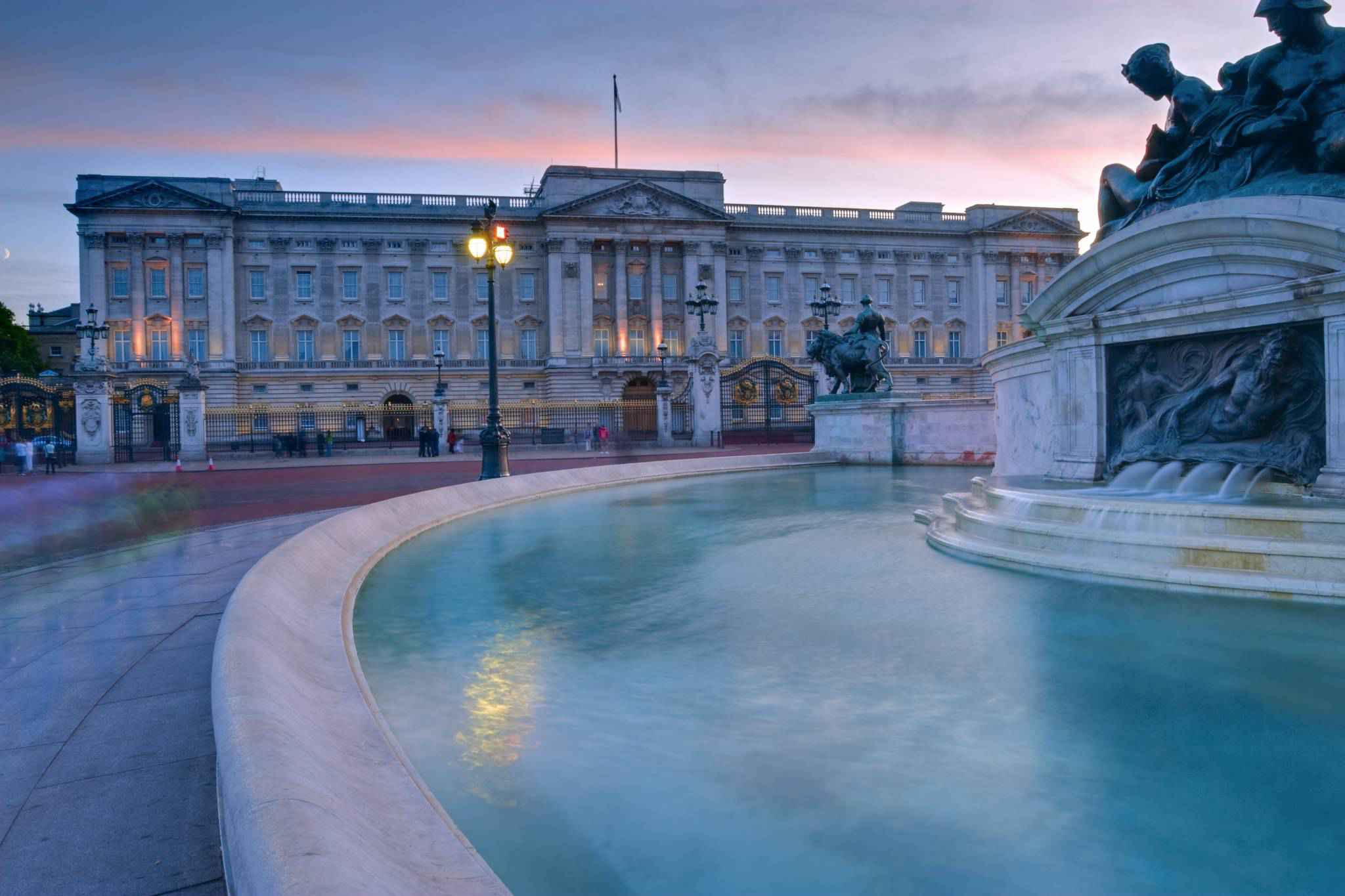 Buckingham Palace is the London residence and administrative headquarters of the reigning monarch of the United Kingdom. Located in the City of Westminster, the palace is often at the centre of state occasions and royal hospitality. It has been a focal point for the British people at times of national rejoicing and mourning.

Originally known as Buckingham House, the building at the core of today's palace was a large townhouse built for the Duke of Buckingham in 1703 on a site that had been in private ownership for at least 150 years. It was acquired by King George III in 1761 as a private residence for Queen Charlotte and became known as The Queen's House. During the 19th century it was enlarged, principally by architects John Nash and Edward Blore, who constructed three wings around a central courtyard. Buckingham Palace became the London residence of the British monarch on the accession of Queen Victoria in 1837.

The last major structural additions were made in the late 19th and early 20th centuries, including the East front, which contains the well-known balcony on which the royal family traditionally congregates to greet crowds. The palace chapel was destroyed by a German bomb during World War II; the Queen's Gallery was built on the site and opened to the public in 1962 to exhibit works of art from the Royal Collection.

The original early 19th-century interior designs, many of which survive, include widespread use of brightly coloured scagliola and blue and pink lapis, on the advice of Sir Charles Long. King Edward VII oversaw a partial redecoration in a Belle Époque cream and gold colour scheme. Many smaller reception rooms are furnished in the Chinese regency style with furniture and fittings brought from the Royal Pavilion at Brighton and from Carlton House. The palace has 775 rooms, and the garden is the largest private garden in London. The state rooms, used for official and state entertaining, are open to the public each year for most of August and September, and on some days in winter and spring.

The palace measures 108 metres (354 ft) by 120 metres (390 ft), is 24 metres (79 ft) high and contains over 77,000 m2 (830,000 sq ft) of floorspace. The floor area is smaller than the Royal Palace of Madrid, the Papal Palace and Quirinal Palace in Rome, the Louvre in Paris, the Hofburg Palace in Vienna, and the Forbidden City. There are 775 rooms, including 19 state rooms, 52 principal bedrooms, 188 staff bedrooms, 92 offices, and 78 bathrooms. The palace also has its own post office, cinema, swimming pool, doctor's surgery, and jeweller's workshop.

The principal rooms are contained on the piano nobile behind the west-facing garden façade at the rear of the palace. The centre of this ornate suite of state rooms is the Music Room, its large bow the dominant feature of the façade. Flanking the Music Room are the Blue and the White Drawing Rooms. At the centre of the suite, serving as a corridor to link the state rooms, is the Picture Gallery, which is top-lit and 55 yards (50 m) long. The Gallery is hung with numerous works including some by Rembrandt, van Dyck, Rubens and Vermeer; other rooms leading from the Picture Gallery are the Throne Room and the Green Drawing Room. The Green Drawing Room serves as a huge anteroom to the Throne Room, and is part of the ceremonial route to the throne from the Guard Room at the top of the Grand Staircase. The Guard Room contains white marble statues of Queen Victoria and Prince Albert, in Roman costume, set in a tribune lined with tapestries. These very formal rooms are used only for ceremonial and official entertaining, but are open to the public every summer. 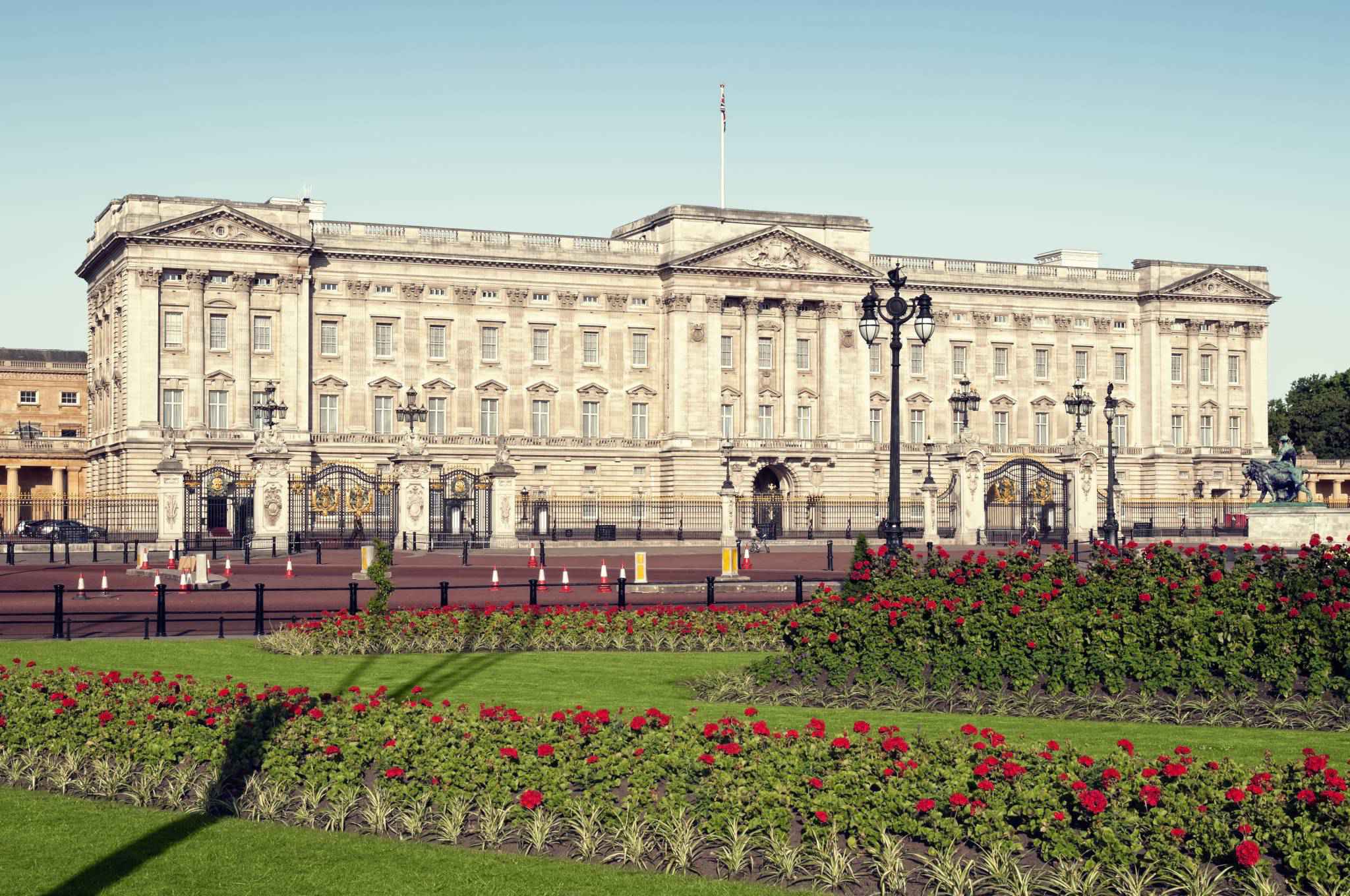