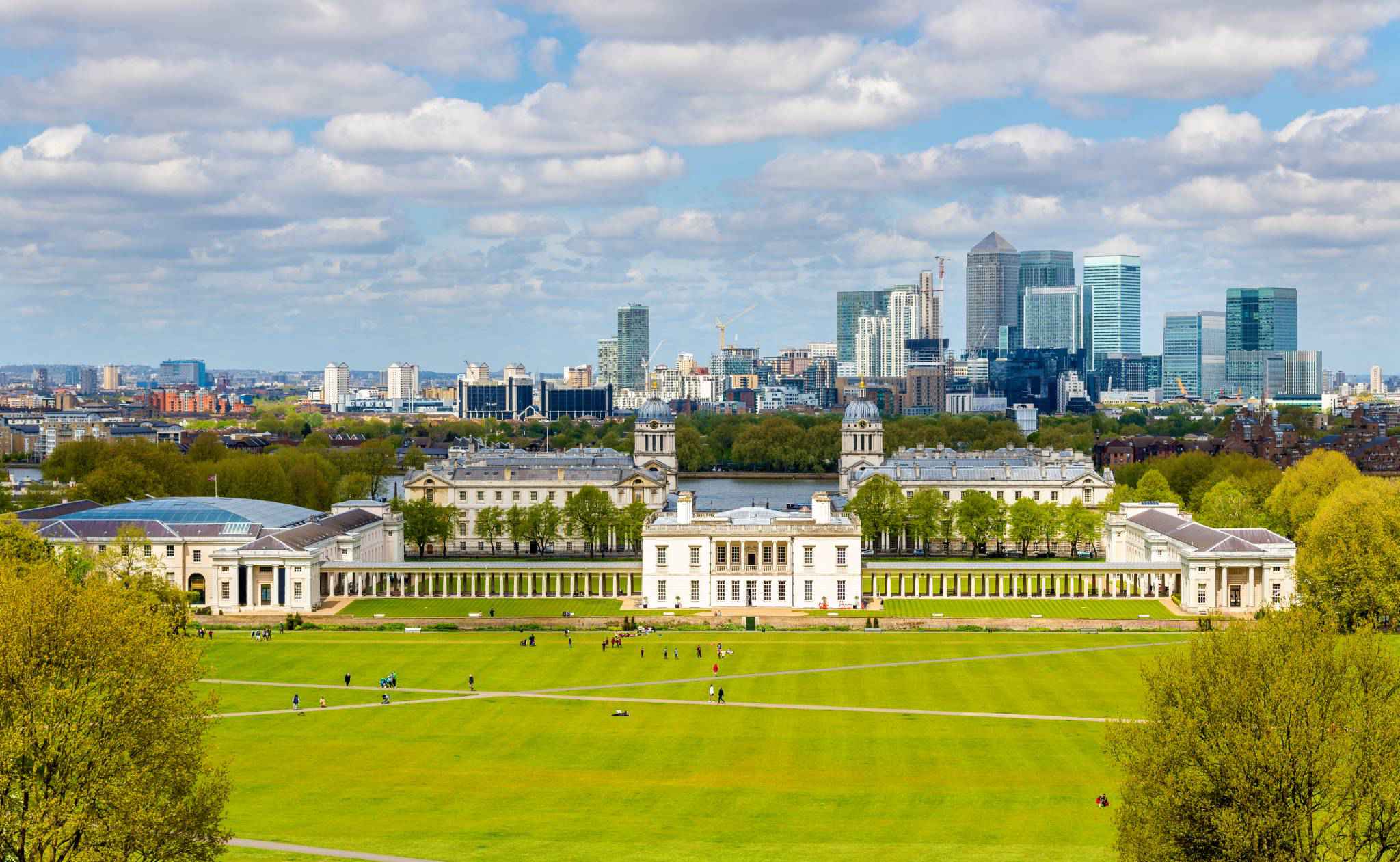 Greenwich Park is a former hunting park in Greenwich and one of the largest single green spaces in south-east London. One of the Royal Parks of London, and the first to be enclosed , it covers 74 hectares (180 acres), and is part of the Greenwich World Heritage Site. It commands fine views over the River Thames, the Isle of Dogs and the City of London. The park is open year round.

Geography
The park is roughly rectangular in plan with sides 1000 metres by 750 metres and oriented with the long sides lying NNW to SSE. In what follows this direction is taken to be N to S for ease of exposition. It is located at grid reference TQ390772.

The park is on two levels with a number of dips and gullies marking the transition between them. The lower level (closest to the Museum, Queen's House and, beyond them, the Thames) lies to the north; from there a steep walk uphill reveals the southern part - a flat expanse that is, essentially, an enclosed extension of the plateau of Blackheath.
Roughly in the centre, on the top of the hill, is the Royal Observatory, Greenwich. At the northern edge is the National Maritime Museum and Queen's House, and beyond those Greenwich Hospital. To the east is Vanbrugh Castle. To the south is Blackheath and in the south western corner is the Ranger's House, looking out over heath. To the west lie the architecturally fine streets of Chesterfield Walk and Croom’s Hill (Pevsner 1983).

Royal Observatory
The Observatory is on the top of the hill. Outside is a statue of General James Wolfe in a small plaza from which there are majestic views across to the former Greenwich Hospital (the Old Royal Naval College and now the University of Greenwich) and then towards the river, the skyscrapers of Canary Wharf, the City of London to the northwest and the Millennium Dome to the north.

Amenities
On the lower level of the park there is a popular children's playground (north-east corner, close to Maze Hill railway station) and an adjacent boating lake. There is also a herb garden (close by entrance to Greenwich town centre).

On the upper level, there is an extensive flower garden complete with large duck pond, a rose garden, a cricket pitch, many 17th century chestnut trees with gnarled, swirling trunks, tennis courts, a bandstand, Roman remains, an ancient oak tree (the 'Queens Oak', associated with Queen Elizabeth I) and an enclosure ('The Wilderness') housing some wild deer.

Nestling just behind the Observatory is the garden of the former Astronomer Royal, a peaceful secluded space which is good for picnics and also sometimes used by theatre groups (Midsummer Night's Dream, etc.). On the opposite side (i.e., just south of the Wolfe statue) is the Park Café. There is another, smaller café by the north west gate.
It is possible to park (pay and display) in areas along the main roads entering from Blackheath. Cycle routes criss-cross the park (as do runners, roller-bladers, dog-walkers, etc.), but other road traffic (cars and motor-cycles only) can only use the park road linking Blackheath and Greenwich at peak periods on weekdays. 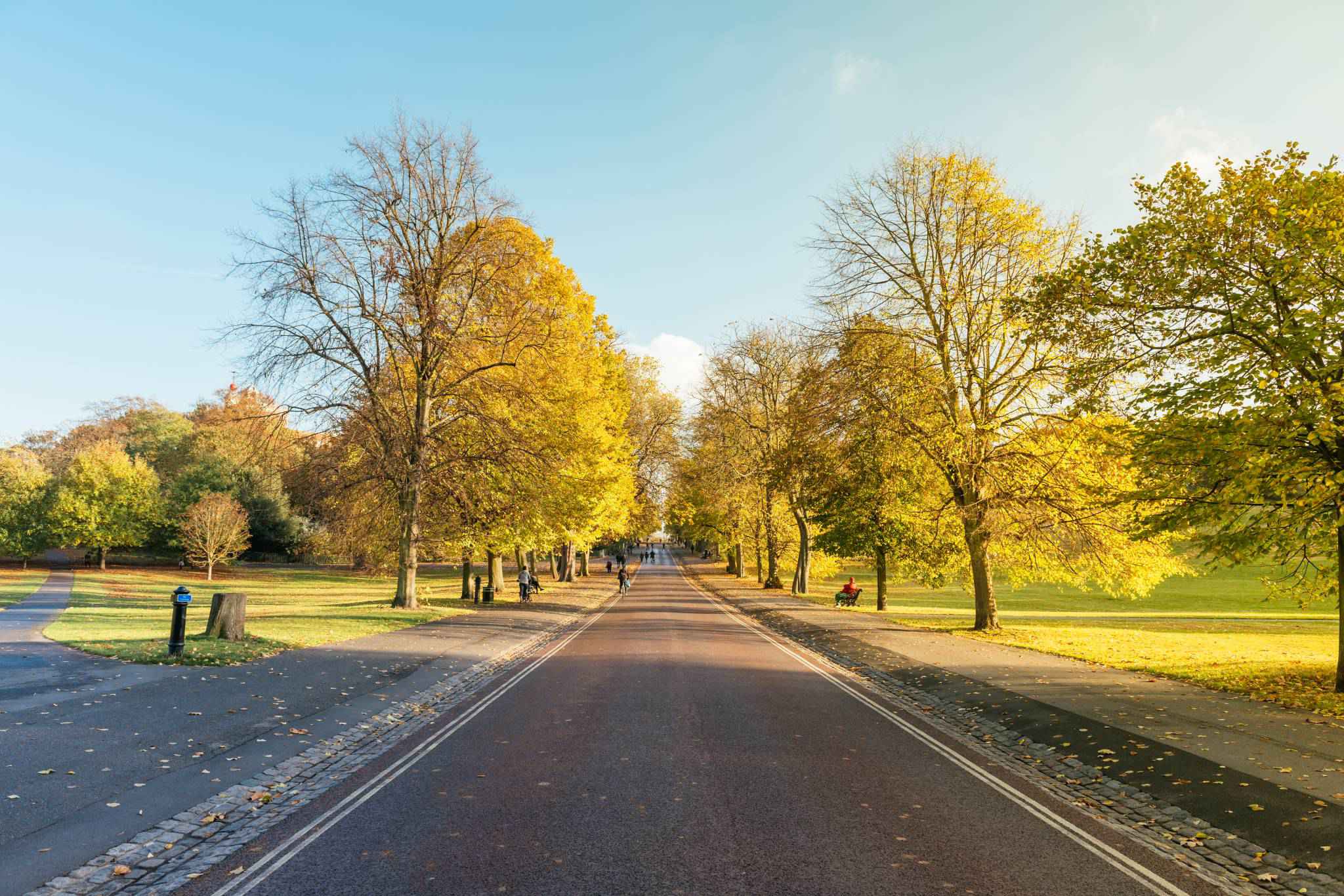