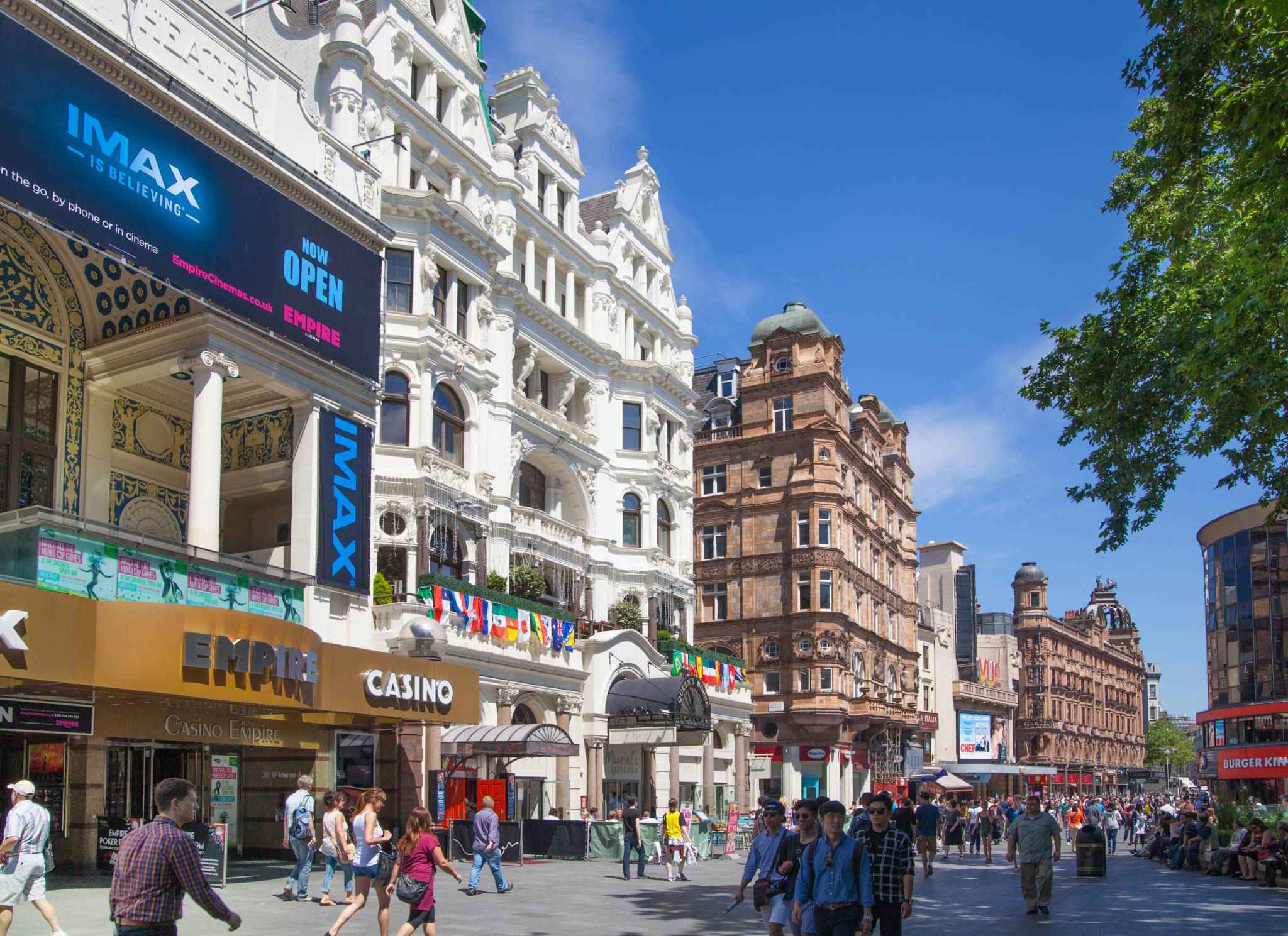 Leicester Square ) is a pedestrianised square in the West End of London, England. It was laid out in 1670 and is named after the contemporary Leicester House, itself named after Robert Sidney, 2nd Earl of Leicester.

The square was originally a gentrified residential area, with tenants including Frederick, Prince of Wales and artists William Hogarth and Joshua Reynolds. It became more down-market in the late 18th century as Leicester House was demolished and retail developments took place, becoming a centre for entertainment. Several major theatres were established in the 19th century, which were converted to cinemas towards the middle of the next. Leicester Square holds a number of nationally important cinemas such as the Odeon Leicester Square, Empire, Leicester Square and the now closed Odeon West End, which are frequently used for film premieres, The nearby Prince Charles Cinema is popular for showing cult films and marathon film runs. The square remains a popular tourist attraction, including hosting events for the Chinese New Year.
The square has always had a park in its centre, which was originally Lammas land. The park's fortunes have varied over the centuries, reaching near dilapidation in the mid-19th century after changing ownership several times. It was restored under the direction of Albert Grant, which included the construction of four new statues and a fountain of William Shakespeare. The square was extensively refurbished and remodelled for the 2012 London Olympics, costing more than £15m and taking over 17 months to complete.

Gardens square
The garden was saved by the Member of parliament Albert Grant, who purchased the park in 1874 for £11,060 and donated it to the Metropolitan Board of Works. The title deed for the square passed to the succeeding public bodies and is now in the ownership of the City of Westminster. After the purchase, the architect James Knowles redesigned the park. A statue of William Shakespeare surrounded by dolphins was constructed in the centre. The four corner gates of the park had one bust each of famous former residents in the square: the scientist Sir Isaac Newton designed by W. Calder Marshall; Sir Joshua Reynolds, the first President of the Royal Academy by H. Weekes; John Hunter, a pioneer of surgery, by T. Wooler; and William Hogarth, the painter, by J. Durham. Ownership transferred to Westminster City Council in 1933. The most recent addition was a bronze statue of film star and director Charlie Chaplin, designed by sculptor John Doubleday in 1981. On the pavement were inscribed the distances in miles to several Commonwealth countries, including Canada, Kenya and Jamaica. After the Great Outdoors refurbishment of the square, only the statue of Shakespeare still remains.

Entertainment
Leicester Square is the centre of London's cinema land, and one of the signs marking the Square bears the legend "Theatreland". It contains the cinema with the largest screen and another with the most seats (over 1,600). The square is the prime location in London for film premieres and co-hosts the London Film Festival each year. Similar to Grauman's Chinese Theatre in Hollywood, the square was surrounded by floor mounted plaques with film stars' names and cast handprints. During the 2010–2012 refurbishment, many of the plaques were removed, confusing tourists who still expected to find them there.

The Leicester Square Theatre is based in nearby Leicester Place. It was constructed in 1955 as a church, before becoming the Notre Dame Hall, then the Cavern in the Town, a popular live music venue in the 1960s. In the 1970s, it was renamed back to the Notre Dame Hall, where the Sex Pistols played one of their first gigs at the club on 15 November 1976. It was converted into a theatre in 2002 as The Venue, and refurbished as the Leicester Square Theatre in 2008. In 2014, it began a production of a musical based on Oscar Wilde's De Profundis.

Cinemas
The Odeon Leicester Square, which dominates the east side of the square, hosts many film premieres. It has a capacity for 1,683 people, arranged in circle and stalls. The last 70mm film showing was Armageddon in 1998, after which the theatre began to use digital technology. The projection room still contains some of the original 1930s decor and normally houses two projectors. The Empire opened in 1962. It was previously the largest cinema on the square, but in 2013 it was subdivided to cater for an IMAX screen. The Odeon West End, on the south side, opened in 1930. It was not generally used for premieres and was earmarked for demolition in 2014, to be replaced by a ten-storey hotel including a two-screen cinema.

Other attractions
Leicester Square is one of several places in the West End that puts on events relating to the Chinese New Year. The celebrations are organised by the London Chinatown Chinese Association and held on the first Sunday during the new year period. Events include music, acrobatics and dancing. In 2015, the celebrations attracted more than 1,000 participants, becoming the largest of their kind in the UK. These included lion dances, a show of the Cultures of China and a drum show. A parade ran nearby through Charing Cross Road and Shaftesbury Avenue.

The School of English operated on Leicester Square from 1992 until its closure in 2015. It taught over 25,000 students during its years of operation.
The world's largest Lego store opened on 3, Swiss Court, Leicester Square in November 2016. The opening was marked by a 6-metre (20 ft) high model of Big Ben made out of 200,000 Lego bricks.

Infrastructure
The main electrical substation for the West End is beneath the Square. The electrical cables to the substation are in a large tunnel ending at Leicester Square, and originating in Wimbledon, at Plough Lane, behind the former Wimbledon FC football ground, before which the cables are above ground. 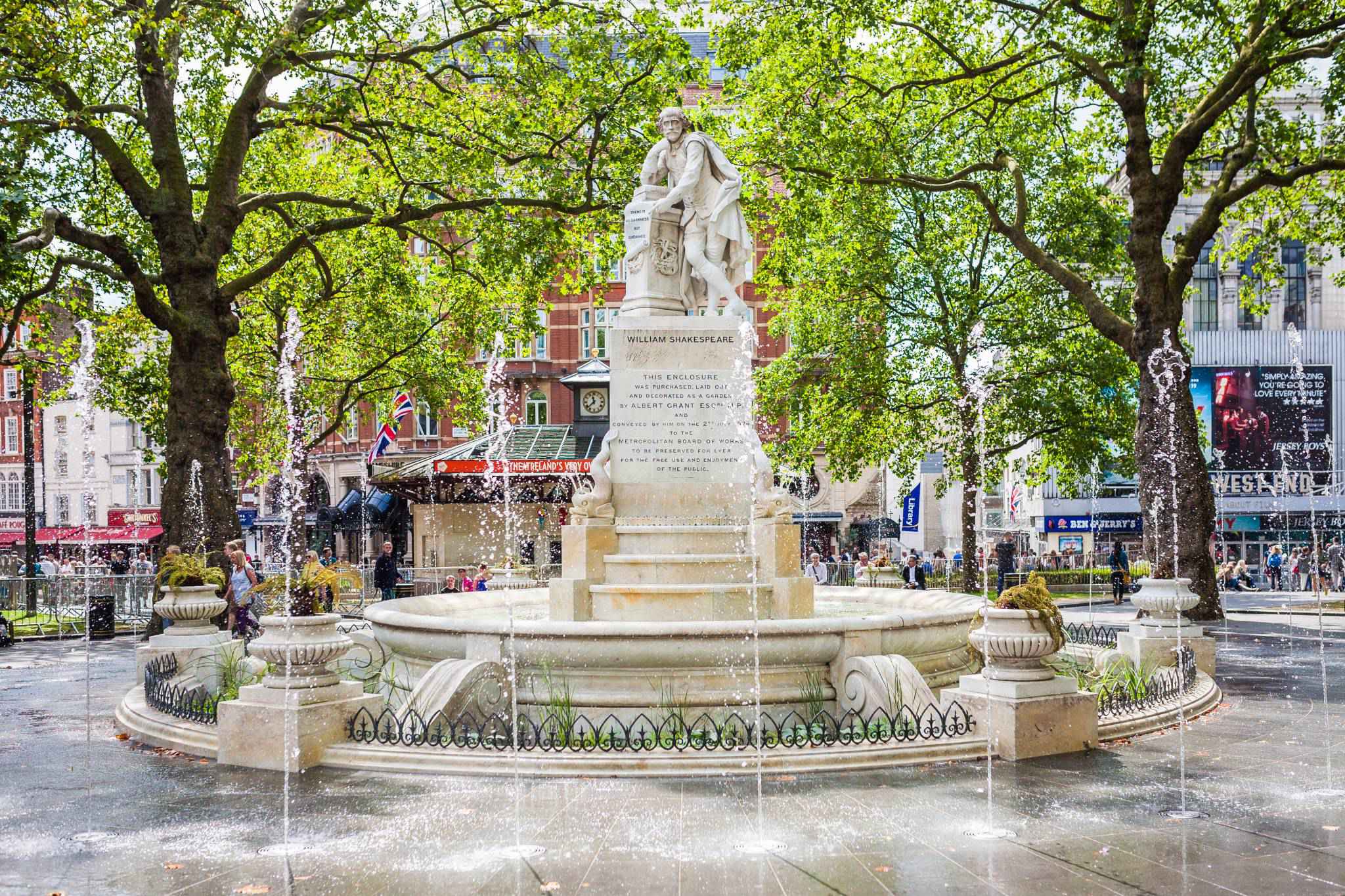