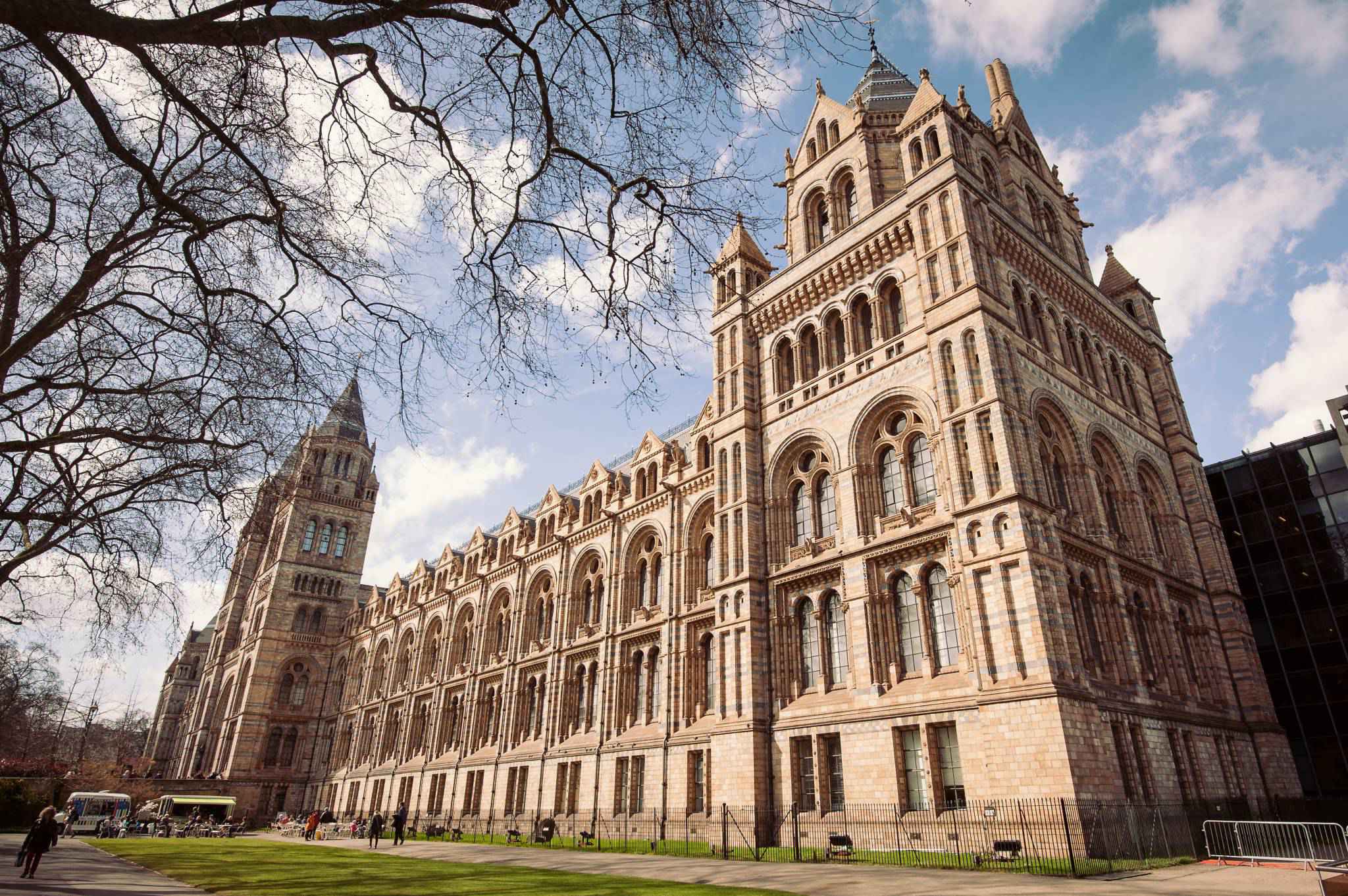 The museum is home to life and earth science specimens comprising some 80 million items within five main collections: botany, entomology, mineralogy, paleontology and zoology. The museum is a world-renowned centre of research specialising in taxonomy, identification and conservation. Given the age of the institution, many of the collections have great historical as well as scientific value, such as specimens collected by Charles Darwin. The museum is particularly famous for its exhibition of dinosaur skeletons and ornate architecture—sometimes dubbed a cathedral of nature—both exemplified by the large Diplodocus cast which dominates the vaulted central hall. The Natural History Museum Library contains extensive books, journals, manuscripts, and artwork collections linked to the work and research of the scientific departments; access to the library is by appointment only. The museum is recognised as the pre-eminent centre of natural history and research of related fields in the world.

Although commonly referred to as the Natural History Museum, it was officially known as British Museum until 1992, despite legal separation from the British Museum itself in 1963. Originating from collections within the British Museum, the landmark Alfred Waterhouse building was built and opened by 1881, and later incorporated the Geological Museum. The Darwin Centre is a more recent addition, partly designed as a modern facility for storing the valuable collections.
Like other publicly funded national museums in the United Kingdom, the Natural History Museum does not charge an admission fee. The museum is an exempt charity and a non-departmental public body sponsored by the Department for Culture, Media and Sport.Catherine, Duchess of Cambridge is a patron of the museum. There are approximately 850 staff at the Museum. The two largest strategic groups are the Public Engagement Group and Science Group.

Major specimens and exhibits
One of the most famous and certainly most prominent of the exhibits—affectionately known as Dippy—is a 105-foot (32 m) long replica Diplodocus carnegii skeleton, situated within the central hall. The cast was given as a gift by the Scottish American industrialist Andrew Carnegie, after a discussion with King Edward VII, then a keen trustee of the British Museum. Carnegie arranged for the cast to be created at his own considerable expense of £2,000, copying the original held at the Carnegie Museum. The pieces were sent to London in 36 crates, and on 12 May 1905, the exhibit was unveiled, to great public and media interest (the real fossil had yet to be mounted, as the Carnegie Museum of Natural History in Pittsburgh was still being constructed to house it). As word of "Dippy" spread, Mr Carnegie paid to have additional copies made for display in most of the major European capitals and in Latin and South America, making Dippy the most-seen dinosaur skeleton in the world. The dinosaur quickly became an iconic representation of the museum, and has featured in many cartoons and other media, including the 1975 Disney comedy One of Our Dinosaurs Is Missing.
Another iconic display is the parallel skeleton and model of a blue whale. The display of the skeleton, weighing 10 tons and some 25 m long, was only made possible in 1934 with the building of the New Whale Hall (now the Large Mammals Hall), though it had been in storage for 42 years since its stranding on sandbanks at Wexford Bay. Discussion of the idea of a life-size model also began around this time, and work was undertaken within the Whale Hall itself. Since taking a cast of such a large animal was deemed prohibitively expensive, scale models were used to meticulously piece the structure together. During construction, workmen left a trapdoor within the whale's stomach, which they would use for surreptitious cigarette breaks. Before the door was closed and sealed forever, some coins and a telephone directory were placed inside—this soon growing to an urban myth that a time capsule was left inside. The work was completed—entirely within the hall and in full view of the public—in 1938. At the time it was the largest such model in the world, at 28.3 m in length, though the construction details were later borrowed by several American museums, who scaled the plans further.
The Darwin Centre is host to Archie, an 8 metre long giant squid taken alive in a fishing net near the Falkland Islands in 2004. The squid is not on general display, but stored in the large tank room in the basement of the Phase 1 building. On arrival at the museum, the specimen was immediately frozen while preparations commenced for its permanent storage. Since few complete and reasonably fresh examples of the species exist, 'wet storage' was chosen, leaving the squid undissected. A 9.45 m acrylic tank was constructed (by the same team that provide tanks to Damien Hirst), and the body preserved using a mixture of formalin and saline solution.
The museum holds the remains and bones of the River Thames whale that lost its way on 20 January 2006 and swam into the Thames. Although primarily used for research purposes, and held at the museum's storage site at Wandsworth, the skeleton has been put on temporary public display.
Dinocochlea, one of the longer-standing mysteries of paleontology (originally thought to be a giant gastropod shell, then a coprolite and now a concretion of a worm's tunnel), has been part of the collection since its discovery in 1921.
The museum keeps a wildlife garden on its west lawn, on which a potentially new species of insect resembling Arocatus roeselii was discovered in 2007.

Galleries
This is the zone that can be entered from Exhibition Road, on the East side of the building. It is a gallery themed around the changing history of the Earth.
The Earth Lab is a gallery that centres around geology, and contains specimens of fossils, minerals and rocks. The "Lab Area" is only open to reserved groups and allows an interactive approach to the gallery, allowing the use of microscopes. It is currently the only gallery in the red-zone without step free access. Earth's Treasury shows specimens of rocks, minerals and gemstones behind glass in a dimly lit gallery. Lasting Impressions is a small gallery containing specimens of rocks, plants and minerals, of which most can be touched.

Access
The closest London Underground station is South Kensington — there is a tunnel from the station that emerges close to the entrances of all three museums. Admission is free, though there are donation boxes in the foyer.

Museum Lane immediately to the north provides disabled access to the museum. 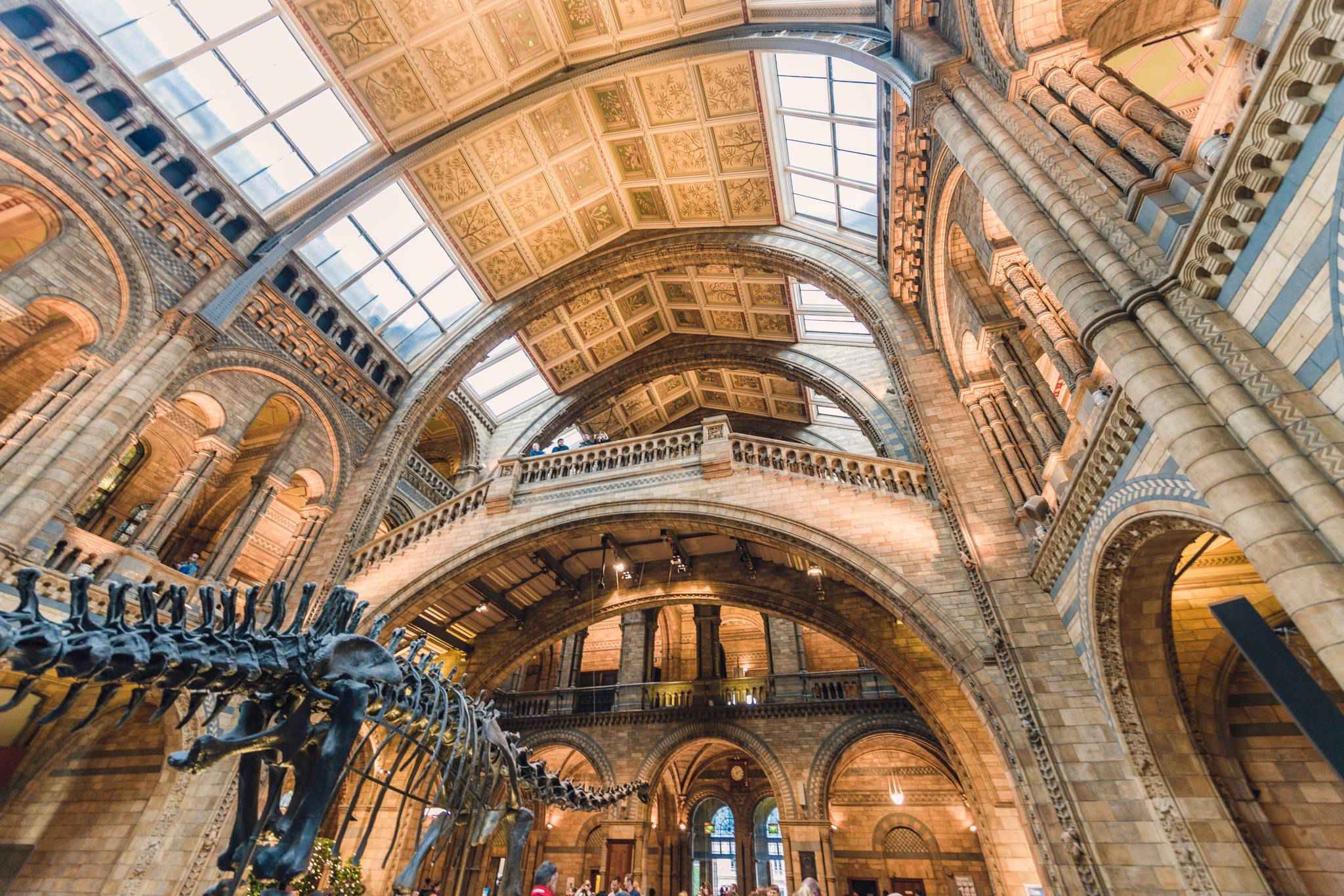