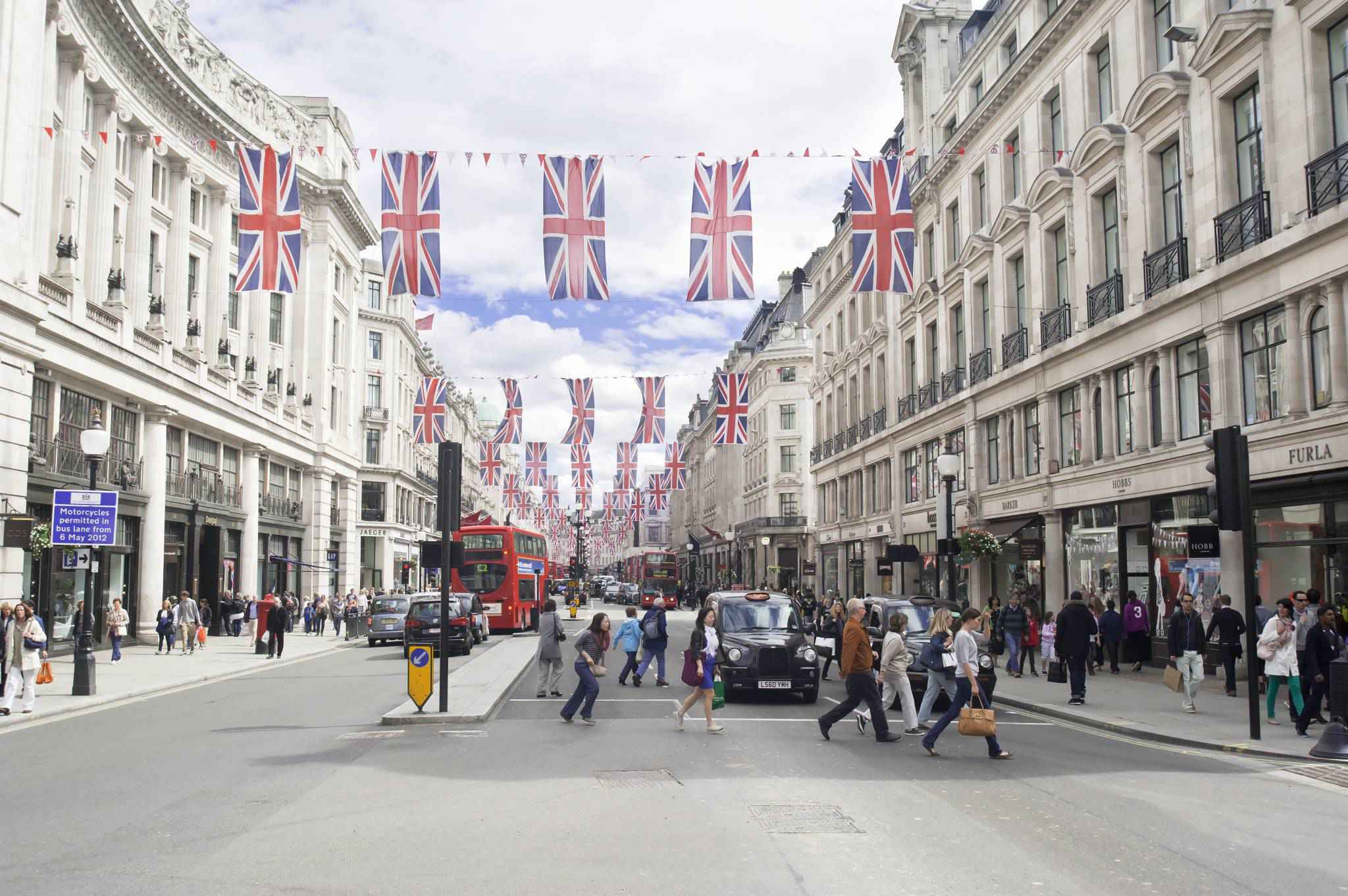 Oxford Street is a major road in the City of Westminster in the West End of London. It is Europe's busiest shopping street, with around half a million daily visitors, and as of 2012 had approximately 300 shops. It is designated as part of the A40, a major road between London and Fishguard, though it is not signed as such, and traffic is regularly restricted to buses and taxis.

The road was originally a Roman road, part of the Via Trinobantina between Essex and Hampshire via London. It was known as Tyburn Road through the Middle Ages and was once notorious as a street where prisoners from Newgate Prison would be transported towards a public hanging. It became known as Oxford Road and then Oxford Street in the 18th century, and began to change character from a residential street to commercial and retail purposes by the late 19th century, also attracting street traders, confidence tricksters and prostitution. The first department stores in Britain opened on Oxford Street in the early 20th century, including Selfridges, John Lewis and HMV. Unlike nearby shopping streets such as Bond Street, it has retained an element of downmarket street trading alongside more prestigious retail stores. The street suffered heavy bombing during World War II, and several longstanding stores including John Lewis were completely destroyed and rebuilt from scratch.

Despite competition from other shopping centres such as Westfield Stratford City and the Brent Cross shopping centre, Oxford Street remains in high demand as a retail location, with several chains hosting their flagship stores on the street, and has a number of listed buildings. The annual switching on of Christmas lights by a celebrity has been a popular event since 1959. However, the combination of a very popular retail area and a main thoroughfare for London buses and taxis has caused significant problems with traffic congestion, safety and pollution. Various traffic management schemes have been proposed by Transport for London, including a ban on private vehicles during daytime hours on weekdays and Saturdays, and improved pedestrian crossings.

Notable buildings
Oxford Street is home to a number of major department stores and flagship retail outlets, containing over 300 shops. It is the most frequently visited shopping street in Inner London, attracting over half a million daily visitors in 2014, and is one of the most popular destinations in London for tourists, with an annual estimated turnover of over £1 billion. It forms part of a shopping district in the West End of London, along with other streets including Covent Garden, Bond Street and Piccadilly.

The New West End Company, formerly the Oxford Street Association, is a group that oversees stores and trade along the street; its objective is to make the place safe and desirable for shoppers. They have been critical of the overcrowding and quality of shops and started to clamp down on abusive traders, who have then been refused licences.
Several British retail chains regard their Oxford Street branch as the flagship store. Debenhams originally opened as Marshall & Snelgrove in 1870; in 1919 they merged with Debenhams, which had opened in nearby Wigmore Street in 1778. The company was owned by Burton between 1985 and 1998. The London flagship store of the House of Fraser began as D H Evans in 1879 and moved to its current premises in 1935. It was the first department store in the UK with escalators serving every floor.Selfridges, Oxford Street, the second-largest department store in the UK and flagship of the Selfridges chain, has been in Oxford Street since 1909.

Marks & Spencer has two stores on Oxford Street. The first, Marks & Spencer Marble Arch, is at the junction with Orchard Street. A second branch between Regent Street and Tottenham Court Road stands on the former site of the Pantheon.

The music retailer HMV was opened at No. 363 Oxford Street in 1921 by Sir Edward Elgar. The Beatles made their first recording in London in 1962, when they cut a 78rpm demo disc in the store. A larger store at No. 150 was opened in 1986 by Sir Bob Geldof, and was the largest music shop in the world at 60,000 square feet (6,000 m2). As well as music and video retail, the premises supported live gigs in the store. Due to financial difficulties, the store closed in 2014, with all retail moving to No. 363.

The 100 Club, in the basement of No. 100, has been running as a live music venue since 24 October 1942. It was thought to be safe from bombing threats due to its underground location, and played host to jazz musicians, including Glenn Miller. It was renamed the London Jazz Club in 1948, and subsequently the Humphrey Lyttelton Club after Lyttelton took over the lease in the 1950s. Louis Armstrong played at the venue during this time. It became a key venue for the trad jazz revival, hosting gigs by Chris Barber and Acker Bilk. It was renamed the 100 Club in 1964 after Roger Horton bought a stake in the venue, adding an alcohol licence for the first time. The venue hosted gigs by several British blues bands, including the Who, the Kinks and the Animals. It was an important venue for punk rock in the UK and hosted the first British punk festival on 21 September 1976, featuring the Sex Pistols, the Damned and the Buzzcocks.

The four stations serve an average of 100 million passengers every year, with Oxford Circus being the busiest.