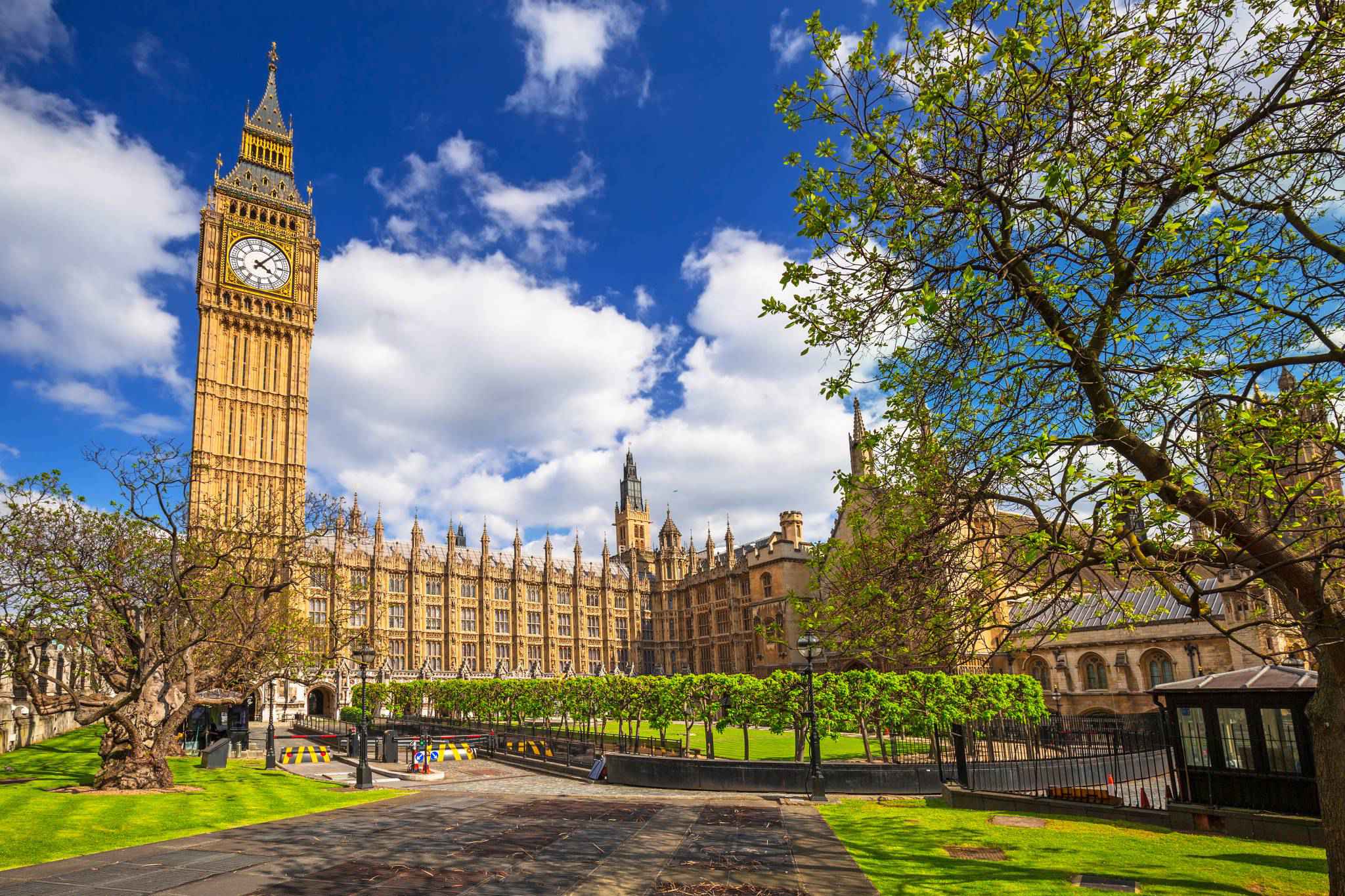 Its name, which derives from the neighbouring Westminster Abbey, may refer to either of two structures: the Old Palace, a medieval building complex destroyed by fire in 1834, and its replacement, the New Palace that stands today. The palace is owned by the monarch in right of the Crown and, for ceremonial purposes, retains its original status as a royal residence. The building is managed by committees appointed by both houses, which report to the Speaker of the House of Commons and the Lord Speaker.

The first royal palace was built on the site in the 11th century, and Westminster was the primary residence of the Kings of England until fire destroyed much of the complex in 1512. After that, it served as the home of the Parliament of England, which had been meeting there since the 13th century, and also as the seat of the Royal Courts of Justice, based in and around Westminster Hall. In 1834, an even greater fire ravaged the heavily rebuilt Houses of Parliament, and the only significant medieval structures to survive were Westminster Hall, the Cloisters of St Stephen's, the Chapel of St Mary Undercroft, and the Jewel Tower.

Towers
The Palace of Westminster features three main towers. Of these, the largest and tallest is 98.5-metre (323 ft) Victoria Tower, which occupies the south-western corner of the Palace. Originally named "The King's Tower" because the fire of 1834 which destroyed the old Palace of Westminster occurred during the reign of King William IV, the tower was an integral part of Barry's original design, of which he intended it to be the most memorable element. The architect conceived the great square tower as the keep of a legislative "castle" (echoing his selection of the portcullis as his identifying mark in the planning competition), and used it as the royal entrance to the Palace and as a fireproof repository for the archives of Parliament. Victoria Tower was re-designed several times, and its height increased progressively; upon its completion in 1858, it was the tallest secular building in the world.

At the base of the tower is the Sovereign's Entrance, used by the monarch whenever entering the Palace to open Parliament or for other state occasions. The 15 m (50 ft) high archway is richly decorated with sculptures, including statues of Saints George, Andrew and Patrick, as well as of Queen Victoria herself. The main body of Victoria Tower houses the three million documents of the Parliamentary Archives in 8.8 kilometres (5.5 mi) of steel shelves spread over 12 floors; these include the master copies of all Acts of Parliament since 1497, and important manuscripts such as the original Bill of Rights and the death warrant of King Charles I. At the top of the cast-iron pyramidal roof is a 22 m (73 ft) flagstaff, from which flies the Royal Standard (the monarch's personal flag) when the Sovereign is present in the Palace. On all other days the Union Flag flies from the mast.

At the north end of the Palace rises the most famous of the towers, Elizabeth Tower, commonly known as Big Ben. At 96 metres (316 ft), it is only slightly shorter than Victoria Tower but much slimmer. It houses the Great Clock of Westminster, built by Edward John Dent on designs by amateur horologist Edmund Beckett Denison. Striking the hour to within a second of the time, the Great Clock achieved standards of accuracy considered impossible by 19th-century clockmakers, and it has remained consistently reliable since it entered service in 1859. The time is shown on four dials 7 metres (23 ft) in diameter, which are made of milk glass and are lit from behind at night; the hour hand is 2.7 metres (8 ft 10 in) long and the minute hand 4.3 metres (14 ft). Elizabeth Tower was designed by Augustus Pugin and built after his death. Charles Barry asked Pugin to design the clock tower because Pugin had previously helped Barry design the Palace In the 2012 BBC Four documentary, Richard Taylor gives a description of Pugin's Clock Tower: "It rises up from the ground in this stately rhythm, higher and higher, before you reach the clock face, picked out as a giant rose, its petals fringed with gold. Medieval windows above that and then it hits the grey slate roof, its greyness relieved by those delicate little windows again picked out in gold leaf. And then rises up again in a great jet of gold to the higher roof that curves gracefully upwards to a spire with a crown and flowers and a cross. It's elegant and grand and has fairy tale qualities."
Five bells hang in the belfry above the clock. The four quarter bells strike the Westminster Chimes every quarter-hour. The largest bell strikes the hours; officially called The Great Bell of Westminster, it is generally referred to as Big Ben, a nickname of uncertain origins which, over time, has been colloquially applied to the whole tower. The first bell to bear this name cracked during testing and was recast; the present bell later developed a crack of its own, which gives it a distinctive sound. It is the third-heaviest bell in Britain, weighing 13.8 tonnes. In the lantern at the top of Elizabeth Tower is the Ayrton Light, which is lit when either House of Parliament is sitting after dark. It was installed in 1885 at the request of Queen Victoria—so that she could see from Buckingham Palace whether the members were "at work"—and named after Acton Smee Ayrton, who was First Commissioner of Works in the 1870s.

The shortest of the Palace's three principal towers (at 91 metres (299 ft)), the octagonal Central Tower stands over the middle of the building, immediately above the Central Lobby. It was added to the plans on the insistence of Dr. David Boswell Reid, who was in charge of the ventilation of the new Houses of Parliament: his plan called for a great central chimney through which what he called "vitiated air" would be drawn out of the building with the heat and smoke of about four hundred fires around the Palace. To accommodate the tower, Barry was forced to lower the lofty ceiling he had planned for the Central Lobby and reduce the height of its windows; however, the tower itself proved to be an opportunity to improve the Palace's exterior design, and Barry chose for it the form of a spire in order to balance the effect of the more massive lateral towers. In the end, the Central Tower failed completely to fulfill its stated purpose, but it is notable as "the first occasion when mechanical services had a real influence on architectural design".

The Palace of Westminster contains over 1,100 rooms, 100 staircases and 4.8 kilometres (3 mi) of passageways, which are spread over four floors. The ground floor is occupied by offices, dining rooms and bars; the first floor (known as the principal floor) houses the main rooms of the Palace, including the debating chambers, the lobbies and the libraries. The top-two floors are used as committee rooms and offices.
Some of the interiors were designed and painted by J.G. Crace, working in collaboration with Pugin and others. For example, Crace decorated and gilded the ceiling of the Chapel of St. Mary Undercroft.

Norman Porch
The grandest entrance to the Palace of Westminster is the Sovereign's Entrance beneath the Victoria Tower. It was designed for the use of the monarch, who travels from Buckingham Palace by carriage every year for the State Opening of Parliament. The Imperial State Crown, which is worn by the sovereign for the ceremony, as well as the Cap of Maintenance and the Sword of State, which are symbols of royal authority and are borne before the monarch during the procession, also travel to the Palace by coach, accompanied by members of the Royal Household; the regalia, as they are collectively known, arrive some time before the monarch and are exhibited in the Royal Gallery until they are needed. The Sovereign's Entrance is also the formal entrance used by visiting dignitaries, as well as the starting point of public tours of the Palace.
From there, the Royal Staircase leads up to the principal floor with a broad, unbroken flight of 26 steps made of grey granite. It is lined on state occasions by sword-wielding troopers of the two regiments of the Household Cavalry, the Life Guards and the Blues and Royals; these are the only troops allowed to bear arms inside the Palace of Westminster, which officially remains a royal residence.

The staircase is followed by the Norman Porch, a square landing distinguished by its central clustered column and the intricate ceiling it supports, which is made up of four groin vaults with lierne ribs and carved bosses. The Porch was named for its proposed decorative scheme, based on Norman history. In the event, neither the planned statues of Norman kings nor the frescoes were executed, and only the stained-glass window portraying Edward the Confessor hints at this theme. Queen Victoria is depicted twice in the room: as a young woman in the other stained-glass window, and near the end of her life, sitting on the throne of the House of Lords, in a copy of a 1900 painting by Jean-Joseph Benjamin-Constant which hangs on the eastern wall. The sixteen plinths intended for the statues now house busts of prime ministers who have sat in the House of Lords, such as the Earl Grey and the Marquess of Salisbury. A double door opposite the stairs leads to the Royal Gallery, and another to the right opens to the Robing Room.

Commons Chamber
The Chamber of the House of Commons is at the northern end of the Palace of Westminster; it was opened in 1950 after the Victorian chamber had been destroyed in 1941 and re-built under the architect Giles Gilbert Scott. The Chamber measures 14 by 20.7 metres (46 by 68 ft) and is far more austere than the Lords Chamber; the benches, as well as other furnishings in the Commons side of the Palace, are coloured green. Members of the public are forbidden to sit on the benches. Other parliaments in Commonwealth nations, including those of India, Canada, Australia and New Zealand, have copied the colour scheme under which the Lower House is associated with green, and the Upper House with red. 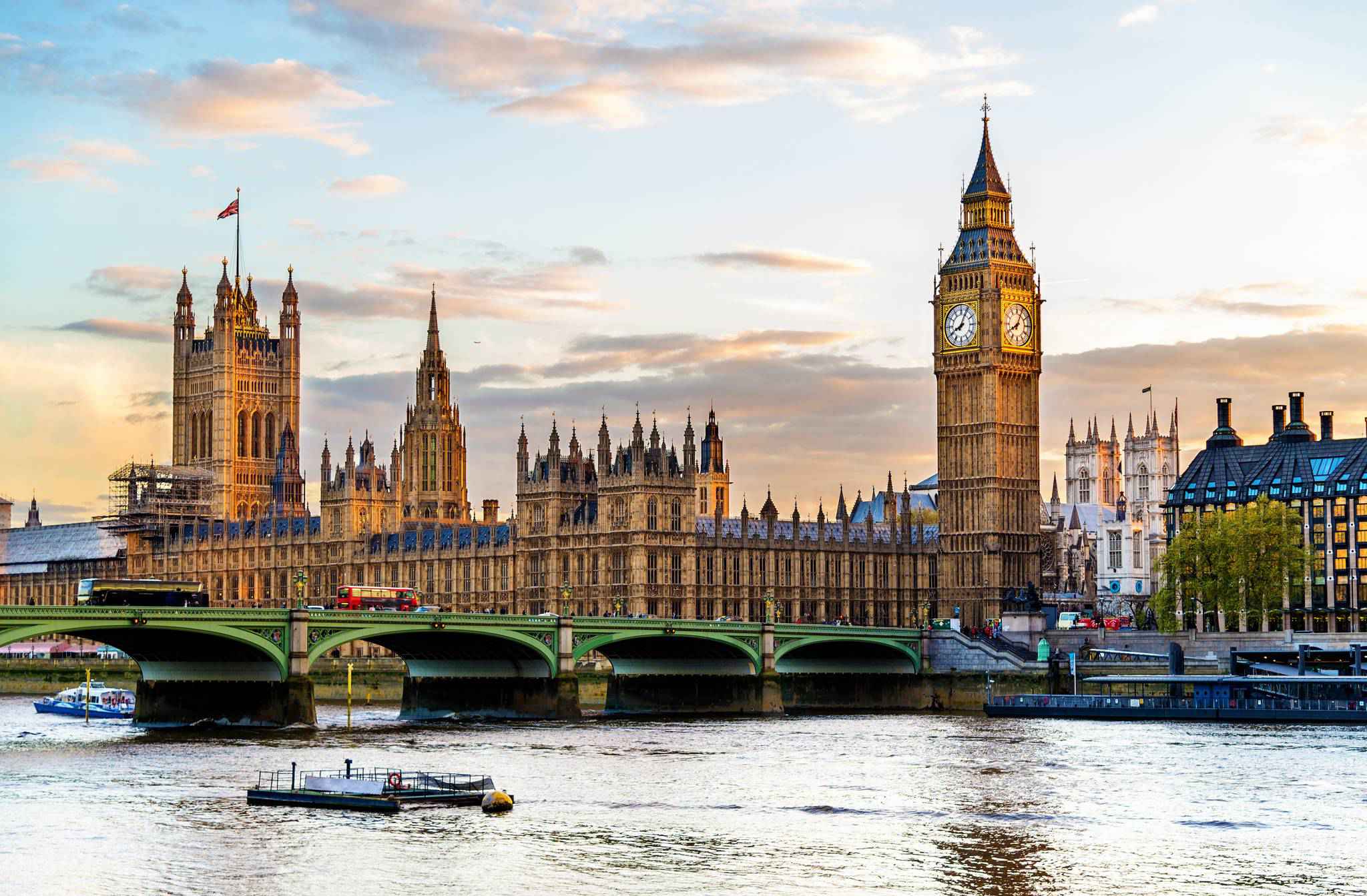