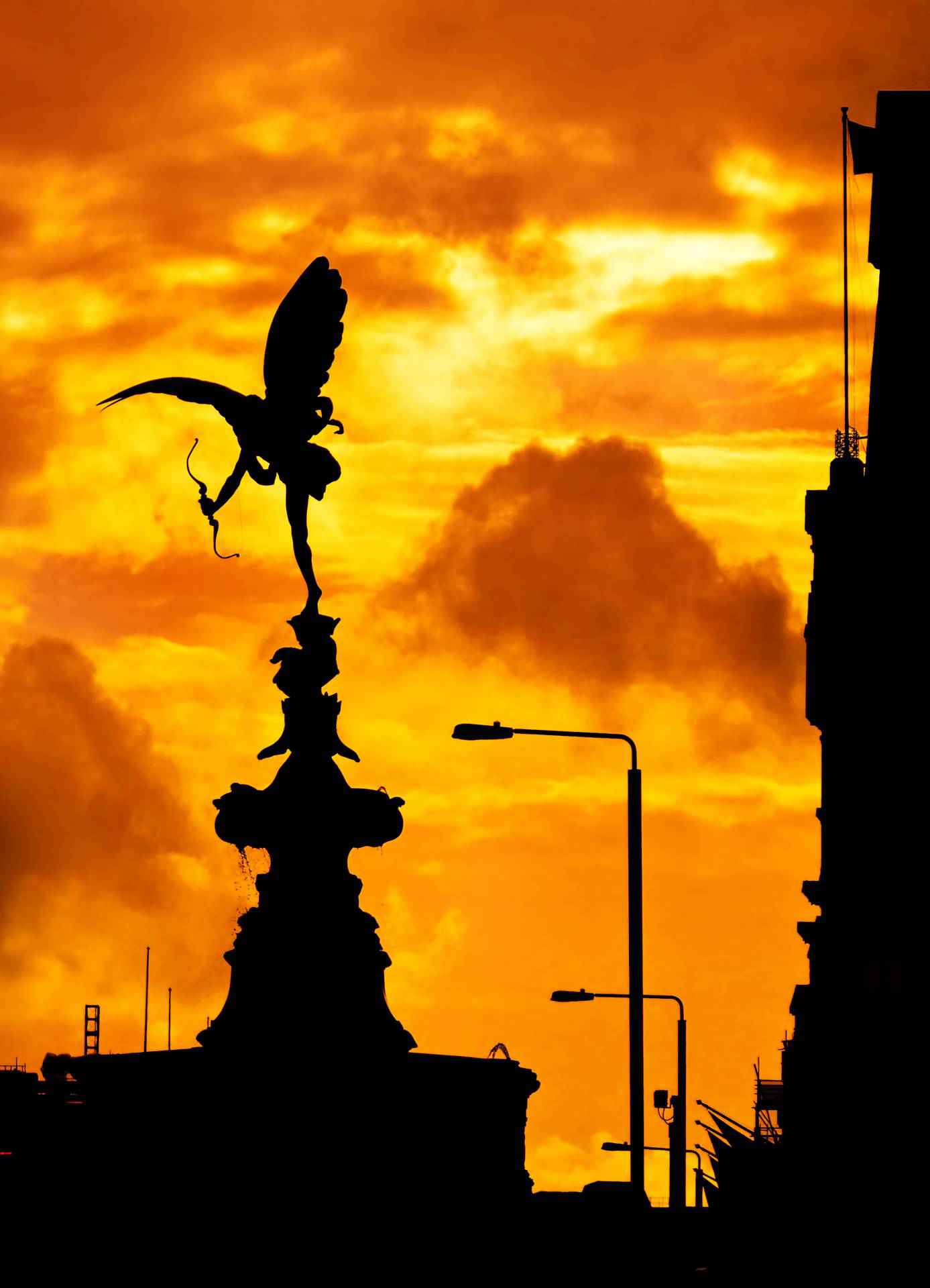 Piccadilly Circus is a road junction and public space of London's West End in the City of Westminster, built in 1819 to connect Regent Street with Piccadilly. In this context, a circus, from the Latin word meaning "circle", is a round open space at a street junction.

Piccadilly now links directly to the theatres on Shaftesbury Avenue, as well as the Haymarket, Coventry Street , and Glasshouse Street. The Circus is close to major shopping and entertainment areas in the West End. Its status as a major traffic junction has made Piccadilly Circus a busy meeting place and a tourist attraction in its own right. The Circus is particularly known for its video display and neon signs mounted on the corner building on the northern side, as well as the Shaftesbury memorial fountain and statue which is popularly, though mistakenly, believed to be of Eros. It is surrounded by several notable buildings, including the London Pavilion and Criterion Theatre. Directly underneath the plaza is Piccadilly Circus tube station, part of the London Underground system.

Location and sights
Piccadilly Circus is surrounded by several major tourist attractions, including the Shaftesbury Memorial, Criterion Theatre, London Pavilion and several major retail stores. Numerous nightclubs, restaurants and bars are located in the area and neighbouring Soho, including the former Chinawhite club.

Criterion Theatre
The Criterion Theatre, a Grade II* listed building, stands on the south side of Piccadilly Circus. Apart from the box office area, the entire theatre, with nearly 600 seats, is underground and is reached by descending a tiled stairway. Columns are used to support both the dress circle and the upper circle, restricting the views of many of the seats inside.

The theatre was designed by Thomas Verity and opened as a theatre on 21 March 1874, although original plans were for it to become a concert hall. In 1883, it was forced to close to improve ventilation and to replace gaslights with electric lights and was reopened the following year.

Major shops
The former Swan & Edgar department store on the west side of the circus between Piccadilly and Regent Street was built in 1928–29 to a design by Reginald Blomfield. Since the closure of the department store in the early 1980s, the building has been successively the flagship London store of music chains Tower Records, Virgin Megastore and Zavvi. The current occupier is clothing brand The Sting.

Lillywhites is a major retailer of sporting goods located on the corner of the circus and Lower Regent Street, next to the Shaftesbury fountain. It moved to its present site in 1925. Lillywhites is popular with tourists, and they regularly offer sale items, including international football jerseys up to 90% off. Nearby Fortnum & Mason is often considered to be part of the Piccadilly Circus shopping area and is known for its expansive food hall.

Underground station and the Bakerloo and Piccadilly lines
The Piccadilly Circus station on the London Underground is located directly beneath Piccadilly Circus itself, with entrances at every corner. It is one of the few stations which have no associated buildings above ground and is fully underground. The below ground concourse and subway entrances are Grade II listed.

The station is on the Piccadilly line between Green Park and Leicester Square, and the Bakerloo line between Charing Cross and Oxford Circus. 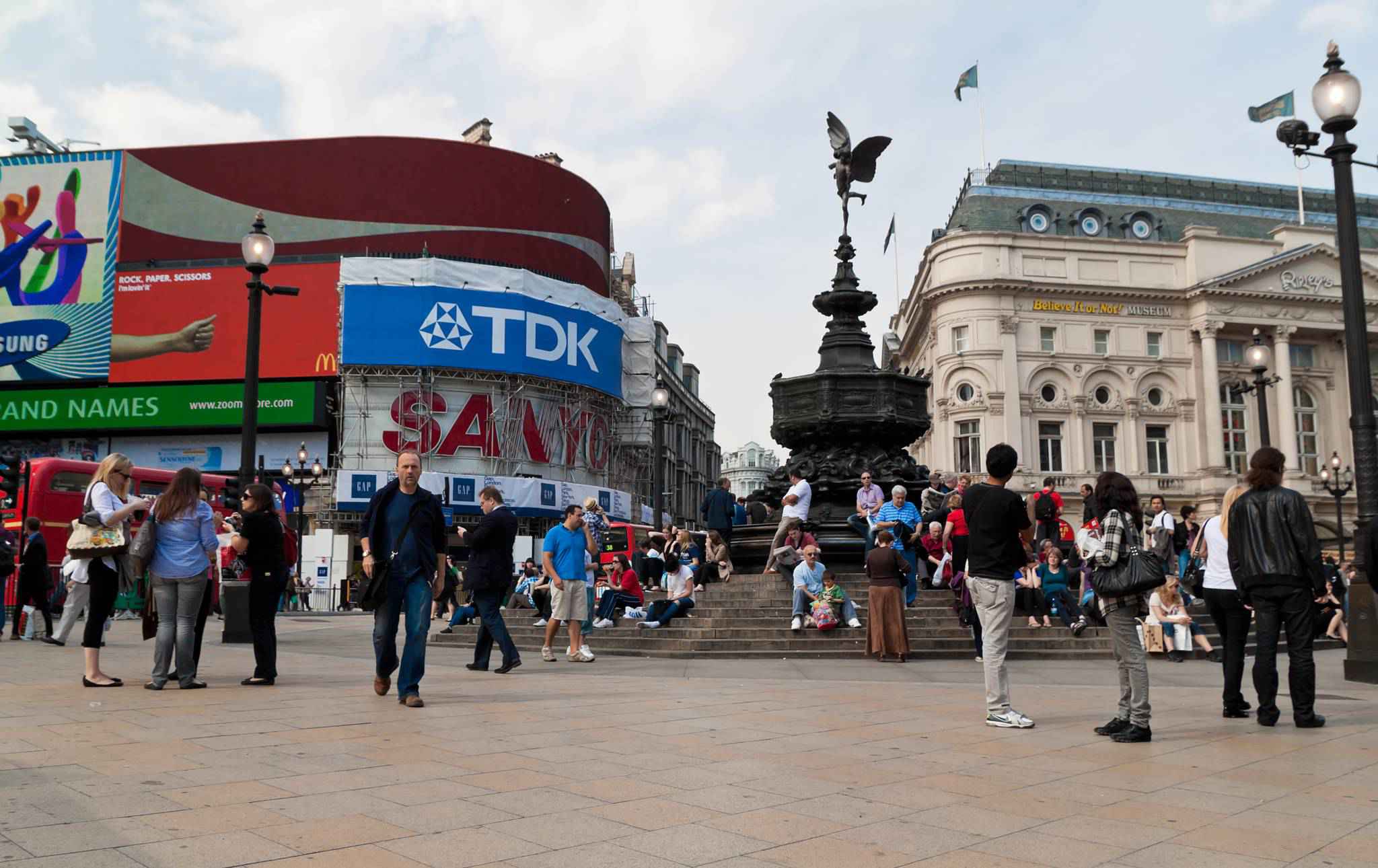