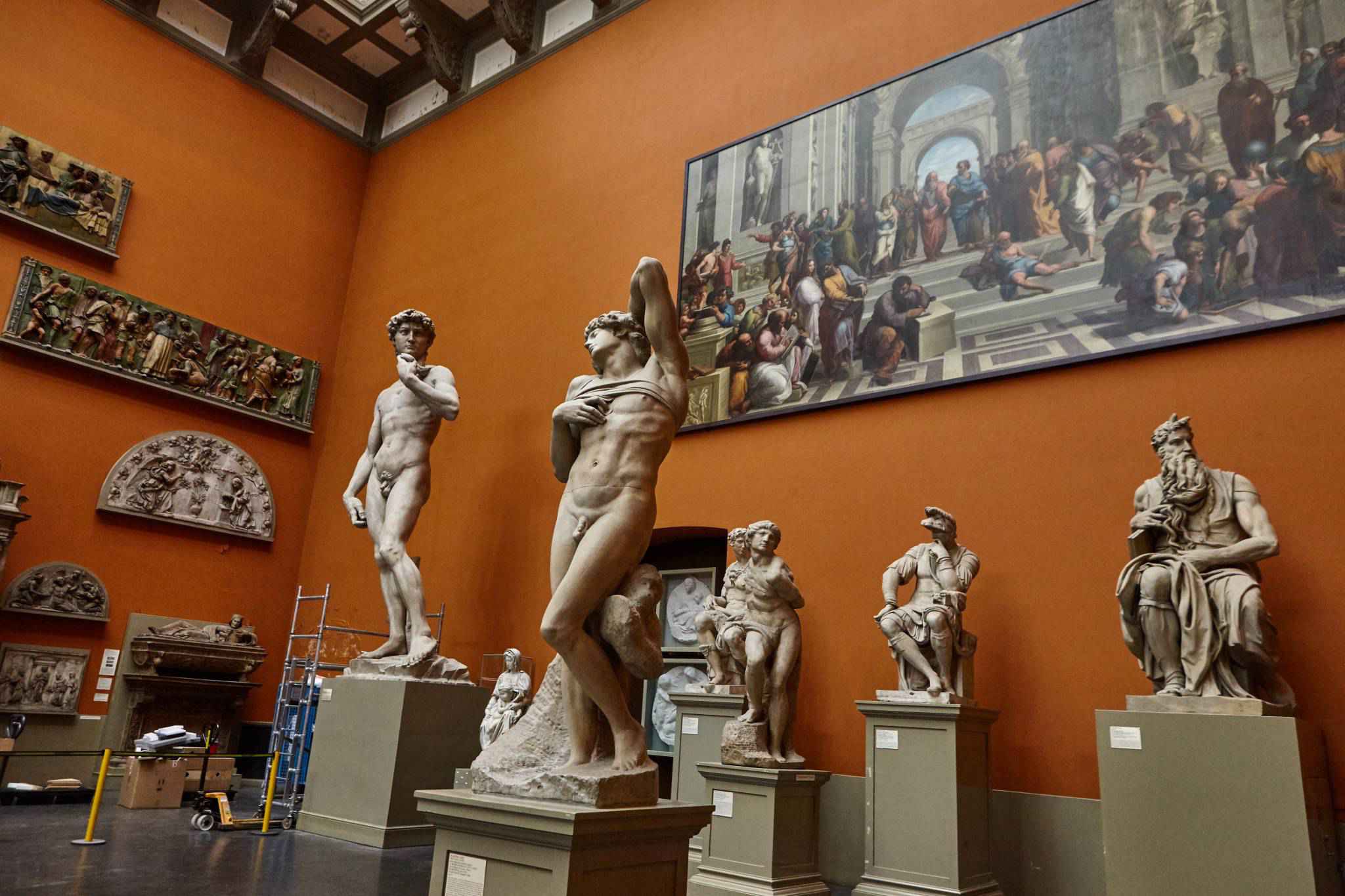 The Victoria and Albert Museum , London, is the world's largest museum of decorative arts and design, housing a permanent collection of over 4.5 million objects. It was founded in 1852 and named after Queen Victoria and Prince Albert. The V&A is located in the Brompton district of the Royal Borough of Kensington and Chelsea, in an area that has become known as "Albertopolis" because of its association with Prince Albert, the Albert Memorial and the major cultural institutions with which he was associated. These include the Natural History Museum, the Science Museum and the Royal Albert Hall. The museum is a non-departmental public body sponsored by the Department for Culture, Media and Sport. Like other national British museums, entrance to the museum has been free since 2001.

The V&A covers 12.5 acres (5.1 ha) and 145 galleries. Its collection spans 5,000 years of art, from ancient times to the present day, from the cultures of Europe, North America, Asia and North Africa. The holdings of ceramics, glass, textiles, costumes, silver, ironwork, jewellery, furniture, medieval objects, sculpture, prints and printmaking, drawings and photographs are among the largest and most comprehensive in the world. The museum owns the world's largest collection of post-classical sculpture, with the holdings of Italian Renaissance items being the largest outside Italy. The departments of Asia include art from South Asia, China, Japan, Korea and the Islamic world. The East Asian collections are among the best in Europe, with particular strengths in ceramics and metalwork, while the Islamic collection is amongst the largest in the Western world. Overall, it is one of the largest museums in the world.

Collections
The Victoria & Albert Museum is split into four Collections departments: 1) Asia; 2) Furniture, Textiles and Fashion; 3) Sculpture, Metalwork, Ceramics & Glass; and, 4) Word & Image. The museum curators care for the objects in the collection and provide access to objects that are not currently on display to the public and scholars.

The collection departments are further divided into sixteen display areas, whose combined collection numbers over 6.5 million objects, not all items are displayed or stored at the V&A. There is a repository at Blythe House, West Kensington, as well as annexe institutions managed by the V&A, also the Museum lends exhibits to other institutions. The following lists each of the collections on display and the number of objects within the collection.

The museum has 145 galleries, but given the vast extent of the collections only a small percentage is ever on display. Many acquisitions have been made possible only with the assistance of the National Art Collections Fund.

Architecture
In 2004, the V&A alongside Royal Institute of British Architects opened the first permanent gallery in the UK covering the history of architecture with displays using models, photographs, elements from buildings and original drawings. With the opening of the new gallery, the RIBA Drawings and Archives Collection has been transferred to the museum, joining the already extensive collection held by the V&A. With over 600,000 drawings, over 750,000 papers and paraphernalia, and over 700,000 photographs from around the world, together they form the world's most comprehensive architectural resource.

Asia
The V&As collection of Art from Asia numbers more than 160,000 objects, one of the largest in existence. It has one of the world's most comprehensive and important collections of Chinese art whilst the collection of South Asian Art is the most important in the West. The museums coverage includes items from South and South East Asia, Himalayan Kingdoms, China, the Far East and the Islamic world.
Islamic art

South Asia
The Museum's collections of South and South-East Asian art are the most comprehensive and important in the West comprising nearly 60,000 objects, including about 10,000 textiles and 6000 paintings, the range of the collection is immense. The Jawaharlal Nehru gallery of Indian art, opened in 1991, contains art from about 500 BC to the 19th century. There is an extensive collection of sculpture, mainly of a religious nature, Hindu, Buddhist and Jain. The gallery is richly endowed with art of the Mughal Empire and the Marathas, including fine portraits of the emperors and other paintings and drawings, jade wine cups and gold spoons inset with emeralds, diamonds and rubies, also from this period are parts of buildings such as a jaali and pillars. India was a large producer of textiles, from dyed cotton chintz, muslin to rich embroidery work using gold and silver thread, coloured sequins and beads is displayed, as are carpets from Agra and Lahore. Examples of clothing are also displayed.

East Asia
The Far Eastern collections include more than 70,000 works of art from the countries of East Asia: China, Japan and Korea. The T. T. Tsui Gallery of Chinese art opened in 1991, displaying a representative collection of the V&As approximately 16,000 objects from China, dating from the 4th millennium BC to the present day. Though the majority of art works on display date from the Ming and Qing dynasties, there are exquisite examples of objects dating from the Tang dynasty and earlier periods. Notably, a metre-high bronze head of the Buddha dated to c.750 AD and one of the oldest items a 2,000-year-old jade horse head from a burial, other sculptures include life-size tomb guardians. Classic examples of Chinese manufacturing are displayed that include lacquer, silk, porcelain, jade and cloisonné enamel. Two large ancestor portraits of a husband and wife painted in watercolour on silk date from the 18th century. There is a unique Chinese lacquerware table, made in the imperial workshops during the reign of the Xuande Emperor in the Ming dynasty. Examples of clothing are also displayed. One of the largest objects is a bed from the mid-17th century. The work of contemporary Chinese designers is also displayed.

Books
The museum houses the National Art Library, a public library containing over 750,000 books, photographs, drawings, paintings, and prints. It is one of the world's largest libraries dedicated to the study of fine and decorative arts. The library covers all areas and periods of the museum's collections with special collections covering illuminated manuscripts, rare books and artists' letters and archives.

British galleries
These fifteen galleries—which opened in November 2001—contain around 4,000 items. The displays in these galleries are based around three major themes: "Style", "Who Led Taste" and "What Was New". The period covered is 1500 to 1900, with the galleries divided into three major subdivisions:
Tudor and Stuart Britain, 1500–1714, covering the Renaissance, Elizabethan, Jacobean, Restoration and Baroque styles
Georgian Britain, 1714–1837, covering Palladianism, Rococo, Chinoiserie, Neoclassicism, the Regency, the influence of Chinese, Indian and Egyptian styles, and the early Gothic Revival
Victorian Britain, 1837–1901, covering the later phases of the Gothic Revival, French influences, Classical and Renaissance revivals, Aestheticism, Japanese style, the continuing influence of China, India, and the Islamic world, the Arts and Crafts movement and the Scottish School.

Cast courts
One of the most dramatic parts of the museum is the Cast Courts in the sculpture wing, comprising two large, skylighted rooms two storeys high housing hundreds of plaster casts of sculptures, friezes and tombs. One of these is dominated by a full-scale replica of Trajan's Column, cut in half to fit under the ceiling. The other includes reproductions of various works of Italian Renaissance sculpture and architecture, including a full-size replica of Michelangelo's David. Replicas of two earlier Davids by Donatello and Verrocchio, are also included, although for conservation reasons the Verrocchio replica is displayed in a glass case.

Ceramics and glass
This is the largest and most comprehensive ceramics and glass collection in the world, with over 80,000 objects from around the world. Every populated continent is represented. Apart from the many pieces in the Primary Galleries on the ground floor, much of the top floor is devoted to galleries of ceramics of all periods covered, which include display cases with a representative selection, but also massed "visible storage" displays of the reserve collection.

Paintings (and miniatures)
The collection includes about 1130 British and 650 European oil paintings, 6800 British watercolours, pastels and 2000 miniatures, for which the museum holds the national collection. Also on loan to the museum, from Her Majesty the Queen Elizabeth II, are the Raphael Cartoons: the seven surviving (there were ten) full scale designs for tapestries in the Sistine Chapel, of the lives of Peter and Paul from the Gospels and the Acts of the Apostles. There is also on display a fresco by Pietro Perugino dated 1522 from the church of Castello at Fontignano (Perugia) and is amongst the painter's last works. One of the largest objects in the collection is the Spanish tempera on wood, 670 x 486 cm, retable of St George, c. 1400, consisting of numerous scenes and painted by Andrés Marzal De Sax in Valencia.

19th-century British artists are well represented. John Constable and J. M. W. Turner are represented by oil paintings, water colours and drawings. One of the most unusual objects on display is Thomas Gainsborough's experimental showbox with its back-lit landscapes, which he painted on glass, which allowed them to be changed like slides. Other landscape painters with works on display include Philip James de Loutherbourg, Peter De Wint and John Ward.

In 1857 John Sheepshanks donated 233 paintings, mainly by contemporary British artists, and a similar number of drawings to the museum with the intention of forming a 'A National Gallery of British Art', a role since taken on by Tate Britain; artists represented are William Blake, James Barry, Henry Fuseli, Sir Edwin Henry Landseer, Sir David Wilkie, William Mulready, William Powell Frith, Millais and Hippolyte Delaroche. Although some of Constable's works came to the museum with the Sheepshanks bequest, the majority of the artist's works were donated by his daughter Isabel in 1888, including the large number of sketches in oil, the most significant being the 1821 full size oil sketch for The Hay Wain. Other artists with works in the collection include: Bernardino Fungai, Marcus Gheeraerts the Younger, Domenico di Pace Beccafumi, Fioravante Ferramola, Jan Brueghel the Elder, Anthony van Dyck, Ludovico Carracci, Antonio Verrio, Giovanni Battista Tiepolo, Domenico Tiepolo, Canaletto, Francis Hayman, Pompeo Batoni, Benjamin West, Paul Sandby, Richard Wilson, William Etty, Henry Fuseli, Sir Thomas Lawrence, James Barry, Francis Danby, Richard Parkes Bonington and Alphonse Legros.
Richard Ellison's collection of 100 British watercolours was given by his widow in 1860 and 1873 'to promote the foundation of the National Collection of Water Colour Paintings'. Over 500 British and European oil paintings, watercolours and miniatures and 3000 drawings and prints were bequeathed in 1868-9 by the clergymen Chauncey Hare Townshend and Alexander Dyce.

Several French paintings entered the collection as part of the 260 paintings and miniatures (not all the works were French, for example Carlo Crivelli's Virgin and Child) that formed part of the Jones bequest of 1882 and as such are displayed in the galleries of continental art 1600–1800, including the portrait of François, Duc d'Alençon by François Clouet, Gaspard Dughet and works by François Boucher including his portrait of Madame de Pompadour dated 1758, Jean François de Troy, Jean-Baptiste Pater and their contemporaries. 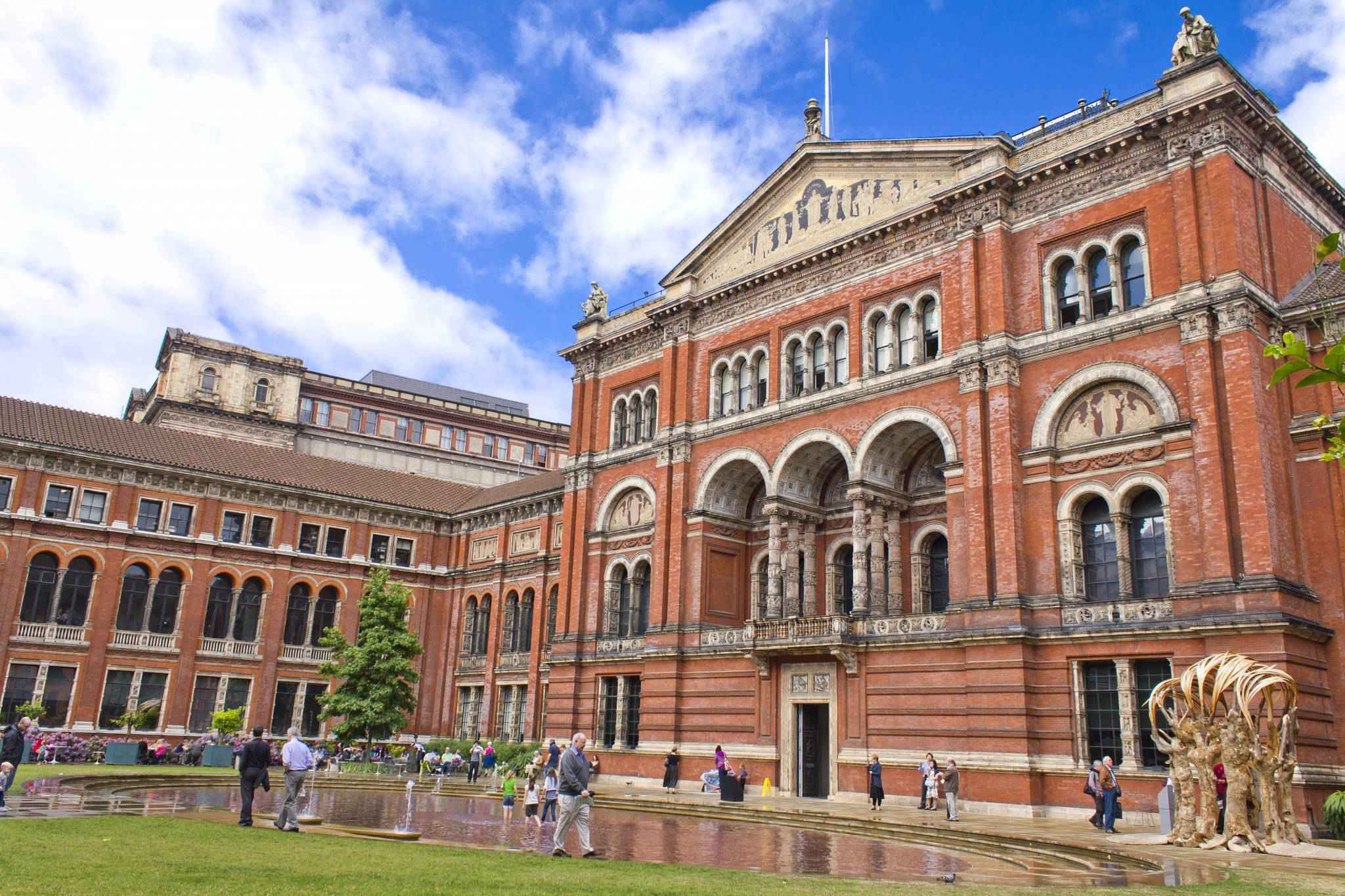