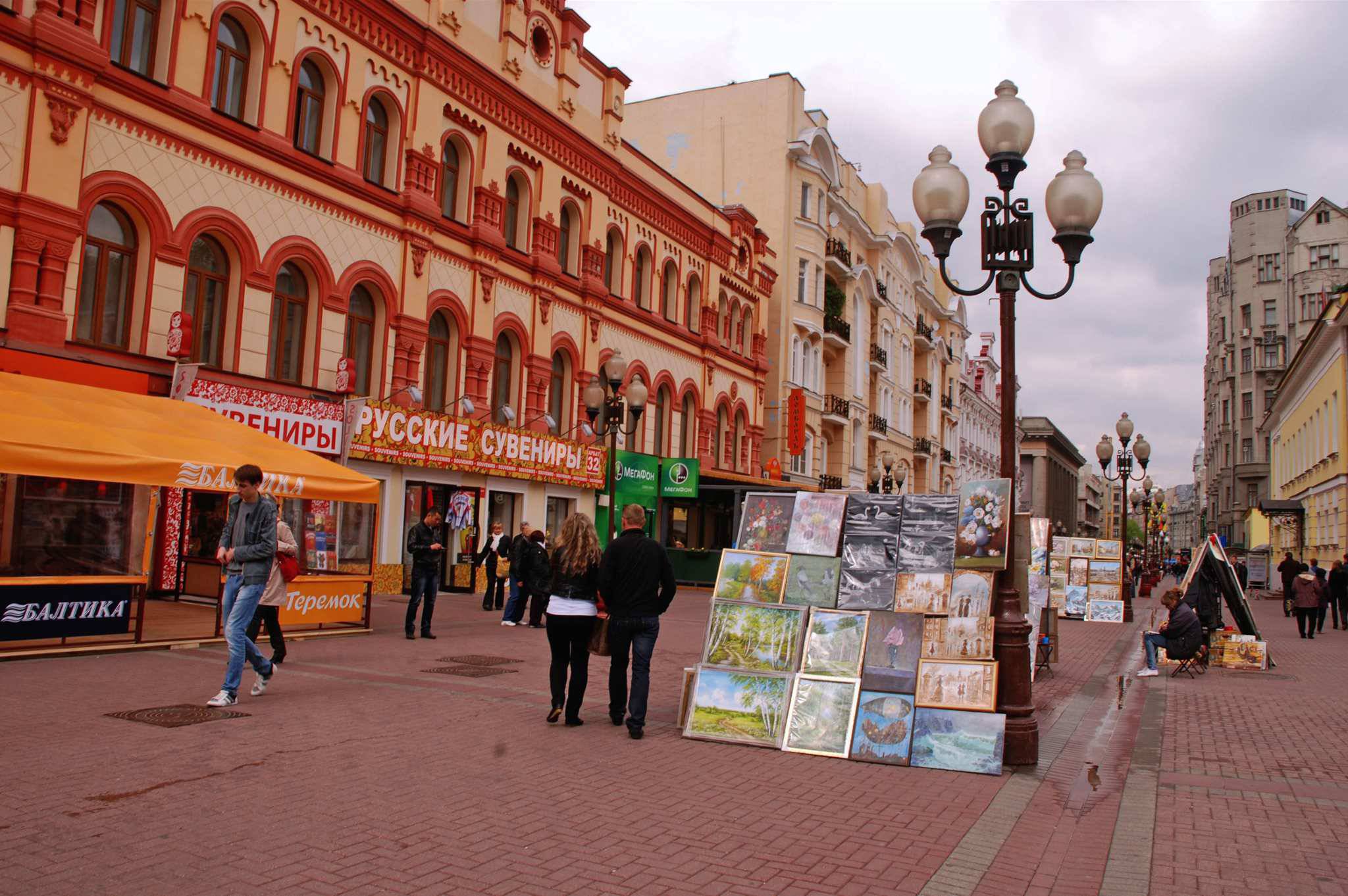 
The Arbat is an approximately one-kilometer long pedestrian street in the historical centre of Moscow. The Arbat has existed at least since the 15th century, thus laying claim to being one of the oldest surviving streets of the Russian capital. It forms the heart of the Arbat District of Moscow. Originally the street formed part of an important trade route and was home to a large number of craftsmen.

In the 18th century, the Arbat came to be regarded by the Russian nobility as the most prestigious living area in Moscow. The street was almost completely destroyed by the great fire during Napoleon's occupation of Moscow in 1812 and had to be rebuilt. In the 19th and early 20th centuries it became known as the a place where petty nobility, artists, and academics lived.

Today the street and its surroundings are undergoing gentrification, and it considered a desirable place to live. Because of the many historic buildings, and the numerous artists who have lived and worked in the street, the Arbat is also an important tourist attraction.
Location and route

The Arbat is in the historic centre of Moscow. It begins at Arbatskaya square (Арбатская площадь), 800 metres west of the walls of the Moscow Kremlin. Arbatskaya square is also the meeting point of the Boulevard Ring and Vozdvizhenka Street (Улица Воздвиженка). The part of this square which is adjacent to the Arbat is called Arbat Gate (Арбатские Ворота), as it is the site of one of the ten gates of the old city wall. The wall, which stood from the 16th to the 18th century, followed the path of the current Boulevard Ring. From this point the Arbat runs southwest, with a dozen side streets leading off, and ends at Smolenskaya Square (Смоленская площадь), which intersects with the Garden Ring. Continuing on from the Arbat in a westerly direction is the eight-lane Smolenskaya Street (Смоленская улица). This street changes its name several times within the city limits, ultimately crossing the MKAD ring road, and becoming the M1 highway to Smolensk, Minsk and Warsaw.
Until the middle of the 20th century, the Arbat remained part of the main road from the Moscow Kremlin westwards. In the 1960s a parallel road, the New Arbat (Новый Арбат) was built, and took on this function. The New Arbat with its wide sidewalks and 1960s tower blocks has no sidestreets. Two decades later the Arbat was made into the first pedestrian zone in Moscow. In order to avoid confusion with the New Arbat, people began to refer to the Arbat as the Old Arbat (Старый Арбат).

Attractions
Since 1986, the Arbat has been dotted with distinctive street lanterns. It has several notable statues, including one to Princess Turandot in front of the Vakhtangov Theatre and another to Soviet-era folk singer, bard, and poet, Bulat Okudzhava, who wrote several poignant songs about the Arbat. The Arbat is home to the headquarters of oil company TNK-BP - a modern building at the beginning of the street. It also contains numerous restaurants, including The Hard Rock Cafe. Many of these restaurants are geared towards visitors to Moscow and are considered by many residents to be over-priced and of low quality compared to those in other parts of the city. There are also a few restaurants and cafes that cater to the working population and middle class; these include Kruzhka, Praim, and Mu-Mu's. 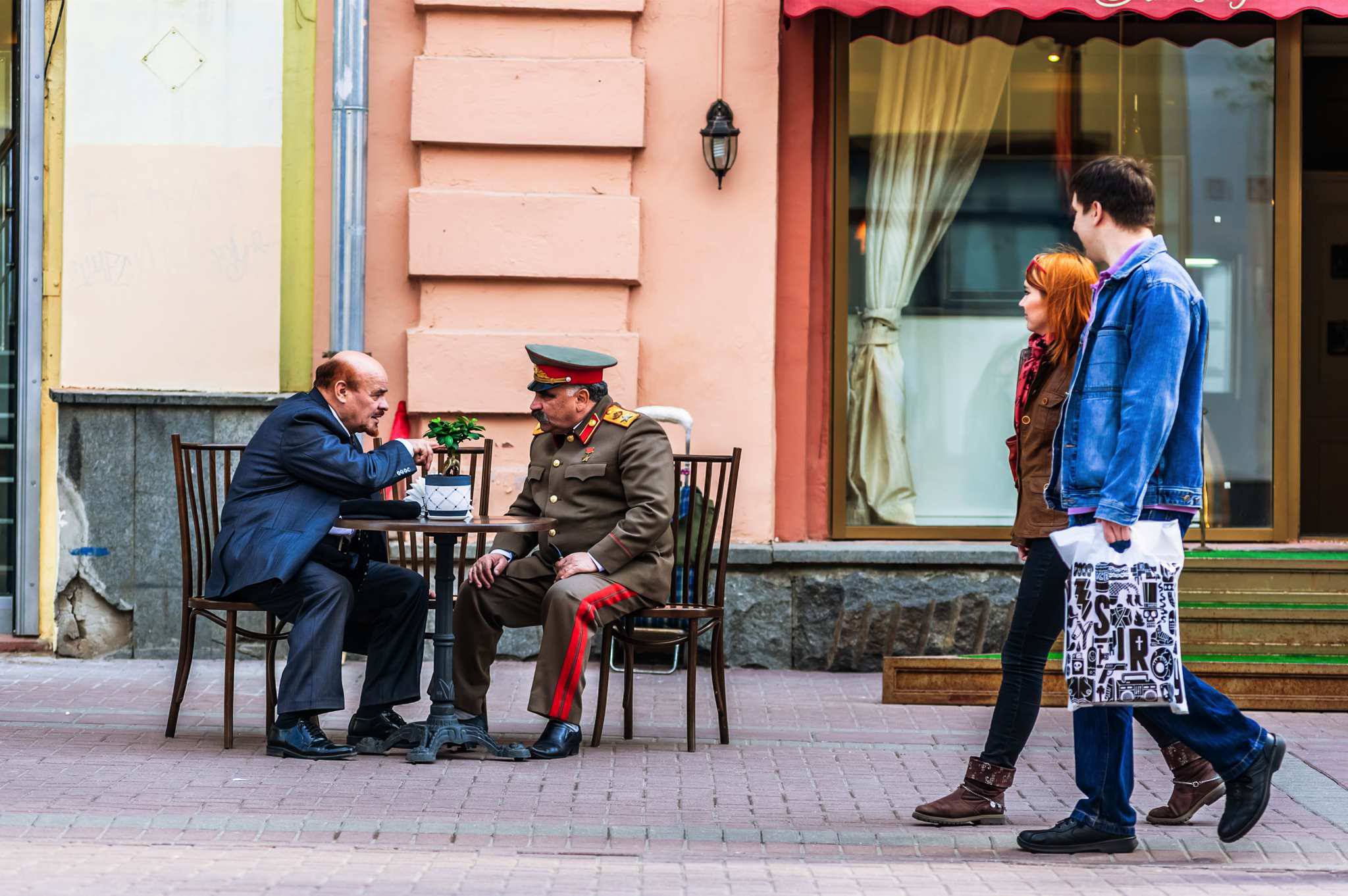