Brooklyn Bridge Park is an 85-acre park on the Brooklyn side of the East River in New York City. The park has revitalized 1.3-mile (2.1 km) of Brooklyn's post-industrial waterfront from Atlantic Avenue in the south, under the Brooklyn Heights Promenade and past the Brooklyn Bridge, to Jay Street north of the Manhattan Bridge. The site includes Brooklyn Piers 1–6, the historic Fulton Ferry Landing, and the preexisting Empire–Fulton Ferry and Main Street Parks. Two Civil War-era structures, Empire Stores and the Tobacco Warehouse, will also be integrated into the park.

Brooklyn Bridge Park is overseen by Brooklyn Bridge Park Corporation, a not-for-profit entity responsible for the planning, construction, maintenance, and operation of the park. The Corporation's mission is to "create and maintain a world class park that is a recreational, environmental and cultural destination enjoyed by residents of, and visitors to, New York City".

Brooklyn Bridge Park spans 85 acres of the East River waterfront in the Brooklyn Heights and Dumbo neighborhoods of Brooklyn. The park is divided into eleven sections: Piers 1 through 6; Fulton Ferry Landing; Brooklyn Bridge Plaza; Empire Fulton Ferry; Main Street; and John Street. Each of these sections features unique topographies, plantings, amenities, and cultural artifacts and installations. All of the sections are currently open to the public; the Brooklyn–Queens Greenway, spanning the park, is also open.

Pier 1 was the first section of parkland opened in March 2010. The pier is Brooklyn Bridge Park's largest and is the only one constructed on a landfill, rather than a pile-supported structure. The area includes two landscaped lawns overlooking the Brooklyn Bridge and New York Harbor, a native salt marsh, a waterfront promenade, a granite prospect, a playground, and concessionaires. Two development sites, slated to contain a 200-room hotel, 159 residential units, as well as restaurants and other public/private spaces, are located along Furman Street and are scheduled to open by Fall 2015. The East River Ferry is also accessible on Pier 1.

A former warehouse dock, Pier 2 opened in May 2014 and is dedicated to active recreation. The Pier contains over five acres of basketball, handball, bocce, and shuffleboard courts, and over half an acre of artificial play turf, fitness equipment, swing sets, and picnic tables available for walk-up use. A wide promenade wraps around the pier, offering views of the Manhattan skyline and New York Harbor. Restrooms, lockers, water fountains/bottle refilling stations, and bike racks are also available. The Pier and all facilities are fully ADA accessible. A warehouse roof preserved from when the pier was operated by the Port Authority of New York and New Jersey partially covers the pier. Additionally, Brooklyn Bridge Park Boathouse operates a free summer kayaking program, which lets patrons paddle in the protected embayment.

In November 2013, Brooklyn Bridge Park opened the Pier 3 Greenway Terrace, adding expansive lawns, a granite terrace and the first of the park's sound attenuating hills. The Pier 3 Greenway Terrace completes the continuous promenade that runs along the water's edge from Pier 1 to Pier 6. The Granite Terrace features salvaged granite blocks that emerge from planted areas that rise 4 to 5 feet and include paintings of flowering trees and evergreens to provide a shady seating area. The granite was salvaged from reconstruction work on the Roosevelt Island Bridge and Willis Avenue Bridge. Working in partnership with the New York City Department of Parks and Recreation, Brooklyn Bridge Park received surplus granite from the bridge reconstruction projects, adding to the Park's sustainable features.

Included in Pier 3 is the sound-attenuating hill that separates the stretch of park from the noisy Brooklyn-Queens Expressway cantilevered over Furman Street. To attenuate the noise, the park's design includes 20- to 30-foot high hills between Piers 2–5. This hill runs along the entire length of the Greenway Terrace and reduces noise pollution in the park up to 75 percent, from 75 decibels to 68 decibels. This hill is formed by salvaged material from the Metropolitan Transportation Authority's East Side Access project in Midtown Manhattan.

Built from the remnant of a railroad float transfer bridge that has settled on the river bed, Pier 4 is planted with native species to assist its ongoing evolution as a protected habitat preserve. The beach design incorporates structures designed by ECOncrete to mimic natural tidal pools typically found along rocky coasts. Some of these pools are accessible to visitors. Non-motorized boats can also be launched from the site. Seven tide pools were installed at the beach for the study of marine life.

Offshore from the beach is Bird Island, an inaccessible nature preserve built from the remnants of a railroad float transfer bridge. Bird Island is planted with a variety of salt-tolerant shrubs, grasses, and trees to encourage the growth of a diverse ecology. The island also features three ECOncrete tide pools as an added ecological element. An Osprey platform has been installed to attract large fishing birds. Rip rap stones surround the edge of the island to buffer the beach.

On December 13, 2012, Pier 5 officially opened. Pier 5 consists of three athletic fields, two playgrounds and a picnic area, costing $26 million to develop the 5 acre site. The athletic fields are made of synthetic turf and will predominantly be used for soccer and can also accommodate lacrosse, cricket, rugby and ultimate Frisbee. The fields will be available for youth and adult leagues, as well as for private and public schools. St. Francis College will host its Division I men's soccer home games at Pier 5 beginning in 2013. The first Division I game at Pier 5 was held on September 10, 2013, as the St. Francis Terriers hosted and defeated the St. Peter's University Peacocks 3-1. The inland portion of Pier 5 features 2 playgrounds and 57 picnic tables along with two dozen grills scattered around the picnic area. There are also tetherball courts and a child-size telescope.
Plans are currently underway to develop a Marina at Pier 5, including a state-of-the-art floating dock and wave attenuation system that will provide the calmest waters on New York Harbor. Pier 5 marina will be developed and operated by Edgewater Resources, a multi-disciplinary marina design, development, and management company. Through a network of local partners, a community boating program will provide free and low cost boating opportunities that include kayaking, fishing, and sailing programs. Two percent of all marina revenue will go toward supporting these programs.

Pier 6, located at the intersection of Furman Street and Atlantic Avenue, was the second section of parkland to open, in Fall 2010. Pier 6 has a diverse array of amenities, including sand volleyball courts, concessionaires, a dog run, and plantings. The pier also contains four themed playgrounds which span over 1.6 acres, including Swing Valley, Slide Mountain, Sandbox Village, and a Water Lab. The seasonal Governor's Island Ferry is also located here, providing a link between Brooklyn and Governors Island. Native plantings are a prominent feature of this section of the park, including a Marsh Garden and 15,000 square feet of organically maintained lawns. Portions of Pier 6 remain undeveloped and unfunded, including two development sites located on the upland portion of the pier and an expansive meadow on the pier itself.

Plans to develop the Pier 6 Landscape are underway. The Pier 6 landscape will complete park construction of the outer two-thirds of the pier. Designed by Michael Van Valkenburgh Associates, the design integrates the landscape with the proposed viewing platform at the northwest corner, while large lawns and planted areas will provide a counterpoint to the adjacent active program at Piers 5 and 6. The centralized flower meadow and perimeter plantings will introduce new ecologies to the southern end of the park and the large lawn areas will provide space for park programs and events. The Pier 6 viewing platform is designed by Bjarke Ingels Group and its construction is contingent on funding. The plan provides a shaded area for visitors and space for events and programs.

Pier 6 has been positively regarded for the most part. However, there have been some complaints about the pier entrance's proximity to the I-278 highway ramps, which some argue causes a safety concern.

Spanning 4.8 acres of the eastern section of parkland, Main Street came under the jurisdiction of the Brooklyn Bridge Park Corporation on December 1, 2010. Prior to this transfer, the New York City Department of Parks and Recreation owned, operated, and maintained the parkland which opened in December 2002. Main Street features a nautical-themed playground, a dog run, and expansive lawns that provide views of the Manhattan skyline.

Plans to renovate the Main Street portion of the Park are underway. When complete, Main Street will feature an expanded lawn, an upgraded dog run, improved pedestrian and bicycle circulation, an entry plaza at Washington Street, and a rock-climbing wall. The Main Street renovation is scheduled for completion in 2015.

The Empire–Fulton Ferry section of the park is 4.5 acres (1.8 ha) of waterfront parkland that is directly adjacent to Main Street. This part of the park was formerly a state park, but was incorporated into Brooklyn Bridge Park in 2010. The part of the park offers a lawn with picnic tables and a boardwalk with views of the East River, Brooklyn Bridge, Manhattan Bridge and Lower Manhattan. 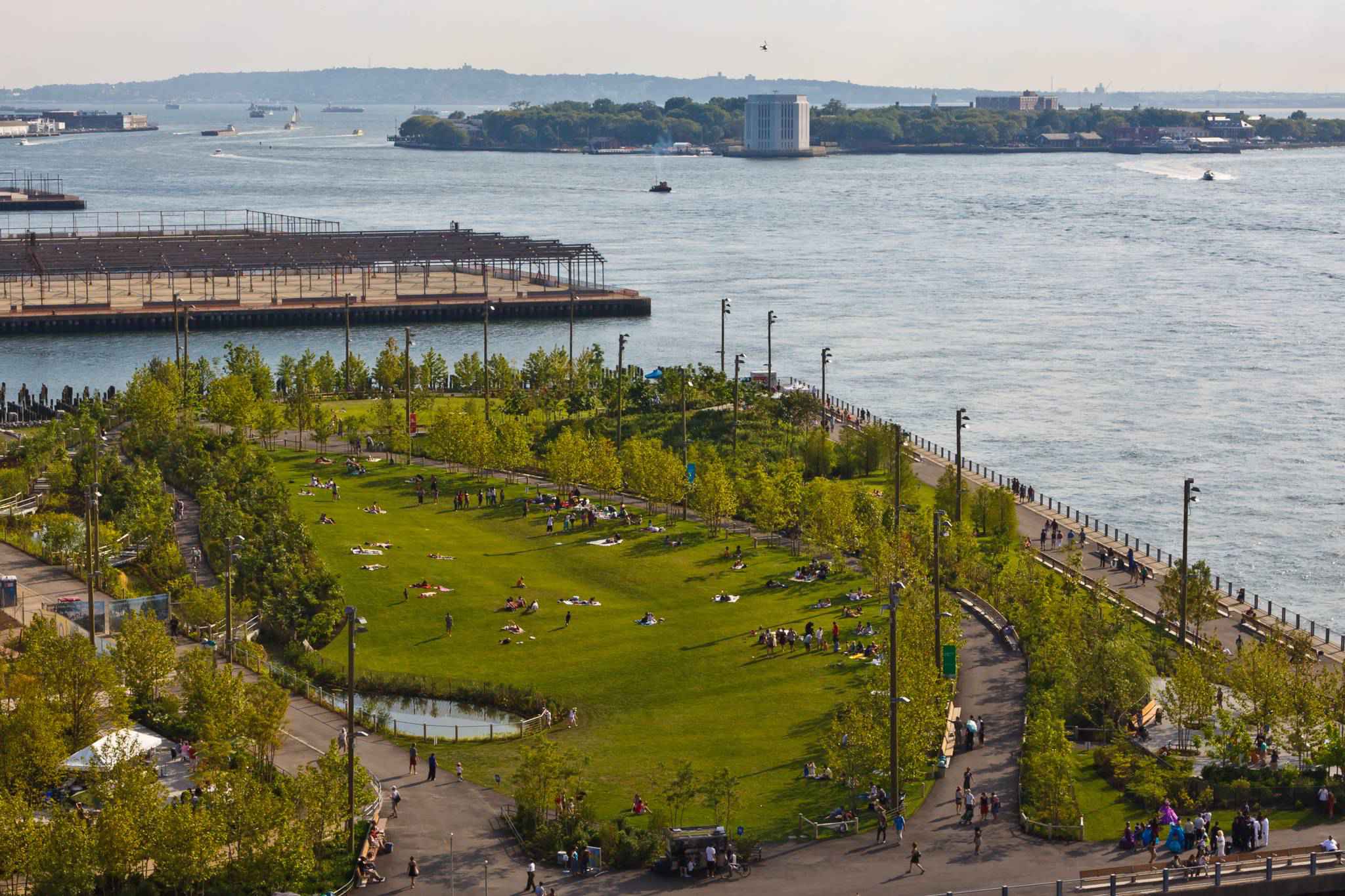