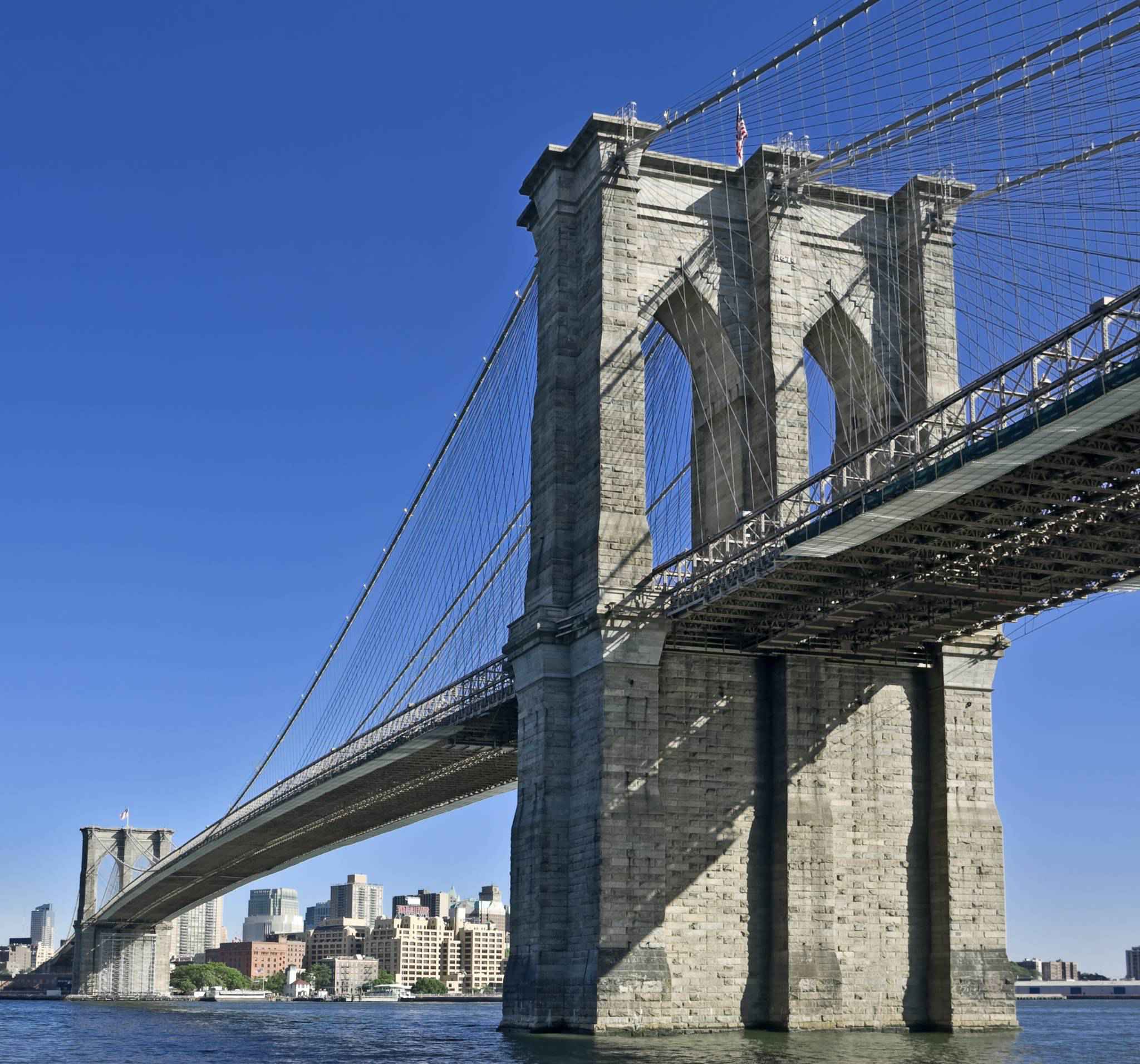 The Brooklyn Bridge is a hybrid cable-stayed/suspension bridge in New York City and is one of the oldest bridges of either type in the United States. Completed in 1883, it connects the boroughs of Manhattan and Brooklyn by spanning the East River. It has a main span of 1,595.5 feet and was the first steel-wire suspension bridge constructed. It was originally referred to as the New York and Brooklyn Bridge and as the East River Bridge, but it was later dubbed the Brooklyn Bridge, a name coming from an earlier January 25, 1867, letter to the editor of the Brooklyn Daily Eagle and formally so named by the city government in 1915. Since its opening, it has become an icon of New York City and was designated a National Historic Landmark in 1964 and a National Historic Civil Engineering Landmark in 1972.

Design
Although the Brooklyn Bridge is technically a suspension bridge, it uses a hybrid cable-stayed/suspension bridge design. The towers are built of limestone, granite, and Rosendale cement. The limestone was quarried at the Clark Quarry in Essex County, New York. The granite blocks were quarried and shaped on Vinalhaven Island, Maine, under a contract with the Bodwell Granite Company, and delivered from Maine to New York by schooner.

The bridge was built with numerous passageways and compartments in its anchorages. New York City rented out the large vaults under the bridge's Manhattan anchorage in order to fund the bridge. Opened in 1876, the vaults were used to store wine, as they were always at 60 °F (16 °C). This was called the "Blue Grotto" because of a shrine to the Virgin Mary next to an opening at the entrance. When New York visited one of the cellars about 102 years later, in 1978, it discovered, on the wall, a "fading inscription" reading: "Who loveth not wine, women and song, he remaineth a fool his whole life long."

Cultural significance
Contemporaries marveled at what technology was capable of, and the bridge became a symbol of the optimism of the time. John Perry Barlow wrote in the late 20th century of the "literal and genuinely religious leap of faith" embodied in the Brooklyn Bridge — "the Brooklyn Bridge required of its builders faith in their ability to control technology".
References to "selling the Brooklyn Bridge" abound in American culture, sometimes as examples of rural gullibility but more often in connection with an idea that strains credulity. For example, "If you believe that, I've got a bridge to sell you." George C. Parker and William McCloundy are two early 20th-century con-men who had (allegedly) successfully perpetrated this scam on unwitting tourists. The 1949 Bugs Bunny cartoon "Bowery Bugs" is also a joking reference to Bugs "selling" a story of the Brooklyn Bridge to a naive tourist.

A bronze plaque is attached to one of the bridge's anchorages, which was constructed on a piece of property occupied by a mansion, the Osgood House, at 1 Cherry Street in Manhattan. It served as the first Presidential Mansion, housing George Washington, his family, and household staff from April 23, 1789, to February 23, 1790, during the two-year period when New York City was the national capital. Its owner, Samuel Osgood, was a Massachusetts politician and lawyer, who married Maria Bowne Franklin, widow of Walter Franklin, the New York merchant who built it in 1770. Washington moved in a week before his 1789 inauguration as first President of the United States. In addition to living quarters, the Osgood House contained the President's private office and the public business office, making it the first seat of the executive branch of the federal government.

"Love locks" is a practice by which a couple inscribes a date and their initials onto a lock, attach it to the bridge, and throw the key into the water as a sign of their "everlasting love". Although the origin of the practice is unknown, it is more popular in Europe, where more than 20 countries have at least one city with a similar location. It has reportedly caused damage to certain bridges and is officially illegal in New York City. The love locks are occasionally removed from the Brooklyn Bridge.