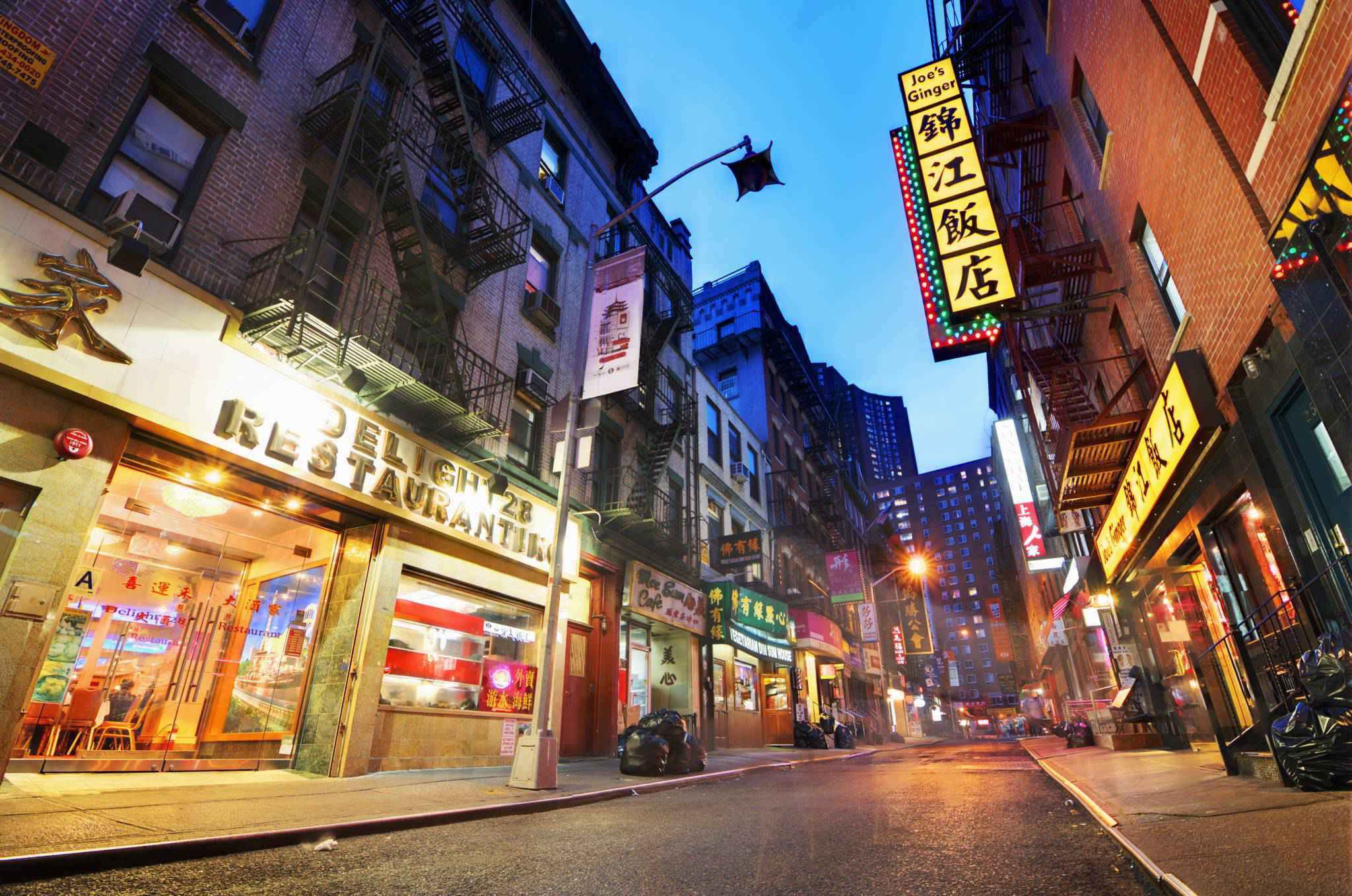 Manhattan's Chinatown is a neighborhood in Lower Manhattan, New York City, bordering the Lower East Side to its east, Little Italy to its north, Civic Center to its south, and Tribeca to its west. Chinatown is home to the largest enclave of Chinese people in the Western Hemisphere. With an estimated population of 90,000 to 100,000 people, Manhattan's Chinatown is also one of the oldest Chinese ethnic enclaves. The Manhattan Chinatown is one of nine Chinatown neighborhoods in New York City, as well as one of twelve in the New York metropolitan area, which contains the largest ethnic Chinese population outside of Asia, enumerating an estimated 819,527 uniracial individuals as of 2014. Historically it was primarily populated by Cantonese speakers. However, in the 1980s-90s, large numbers of Fuzhounese-speaking immigrants also arrived. As many Fuzhounese and Cantonese speakers now speak Mandarin—the official language in China and Taiwan—in addition to their native languages, this made it more important for Chinatown residents to learn and speak Mandarin.

Buildings
The housing stock of Chinatown is still mostly composed of cramped tenement buildings, some of which are over 100 years old. It is still common in such buildings to have bathrooms in the hallways, to be shared among multiple apartments. A federally subsidized housing project, named Confucius Plaza, was completed on the corner of Bowery and Division Street in 1976. This 44-story residential tower block gave much needed new housing stock to thousands of residents. The building also housed a new public grade school, P.S. 124 (or Yung Wing Elementary). Besides being the first and largest affordable housing complex specifically available to the Chinatown population Confucius Plaza is also a cultural and institutional landmark, springing forth community organization, Asian Americans for Equality (AAFE), one of Chinatown's oldest political/community organizations, founded in 1974.

For much of Chinatown's history, there were few unique architectural features to announce to visitors that they had arrived in the neighborhood (other than the language of the shop signs). In 1962, the Lieutenant Benjamin Ralph Kimlau Memorial archway at Chatham Square was erected in memorial of the Chinese-Americans who died in World War II. This memorial bears calligraphy by the great Yu Youren 于右任 (1879–1964). A statue of Lin Zexu (林則徐), also known as Commissioner Lin, a Foochowese Chinese official who opposed the opium trade, is also located at the square; it faces uptown along East Broadway, now home to the bustling Fuzhou neighborhood and known locally as Fuzhou Street (Fúzhóu jiē 福州街). In the 1970s, New York Telephone, then the local phone company, started capping the street phone booths with pagoda-like decorations. In 1976, the statue of Confucius in front of Confucius Plaza became a common meeting place. In the 1980s, banks which opened new branches and others which were renovating started to use Chinese traditional styles for their building facades. The Church of the Transfiguration, a national historic site built in 1815, stands off Mott Street. The Chinese American experience has been documented at the Museum of Chinese in America in Manhattan's Chinatown since 1980.

The Manhattan Bridge connects Chinatown to Downtown Brooklyn. The FDR Drive runs along the East River, where the East River Greenway, a pedestrian walkway and bikeway, is also present.

There are multiple bike lanes in the area as well. 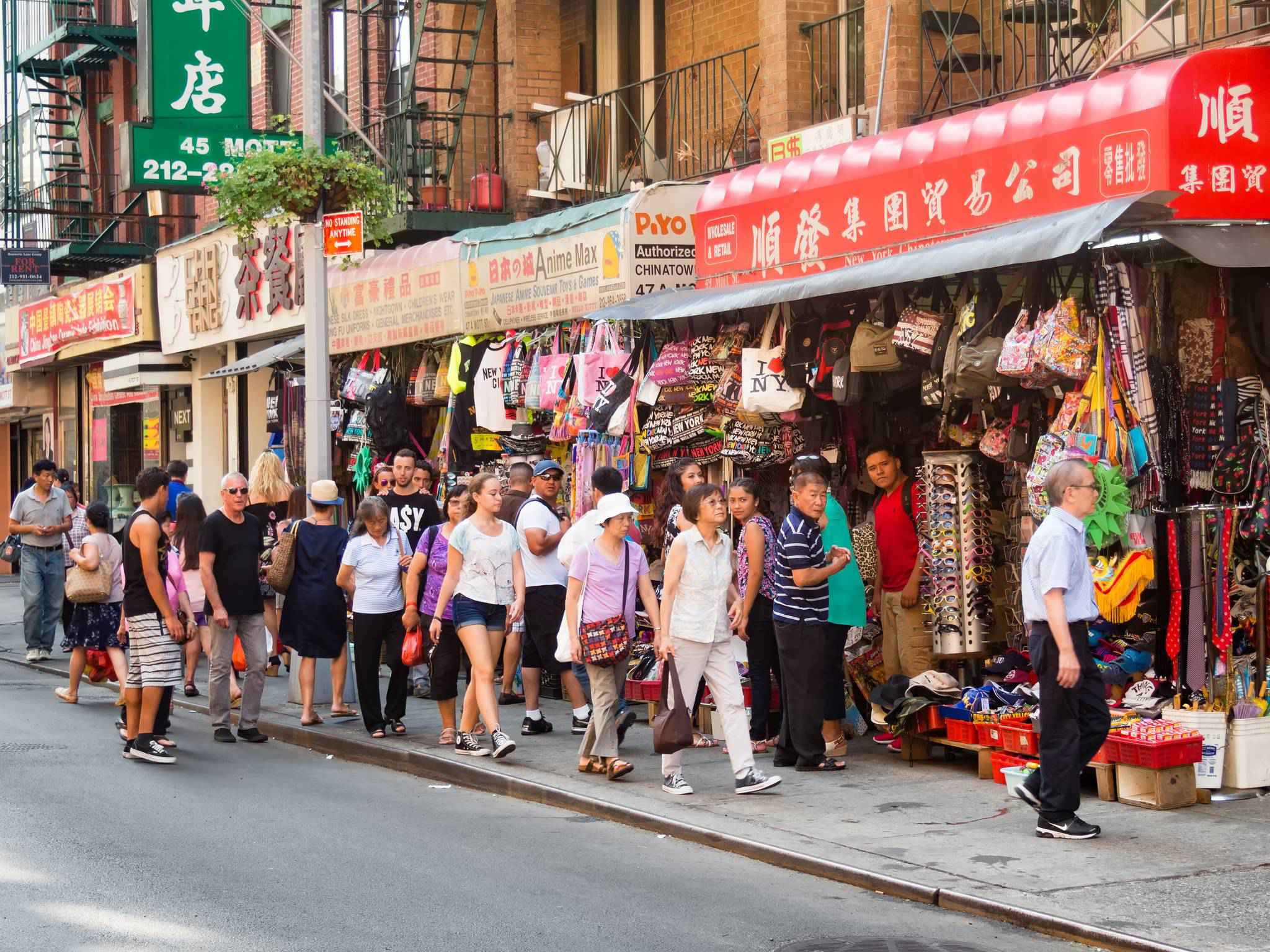