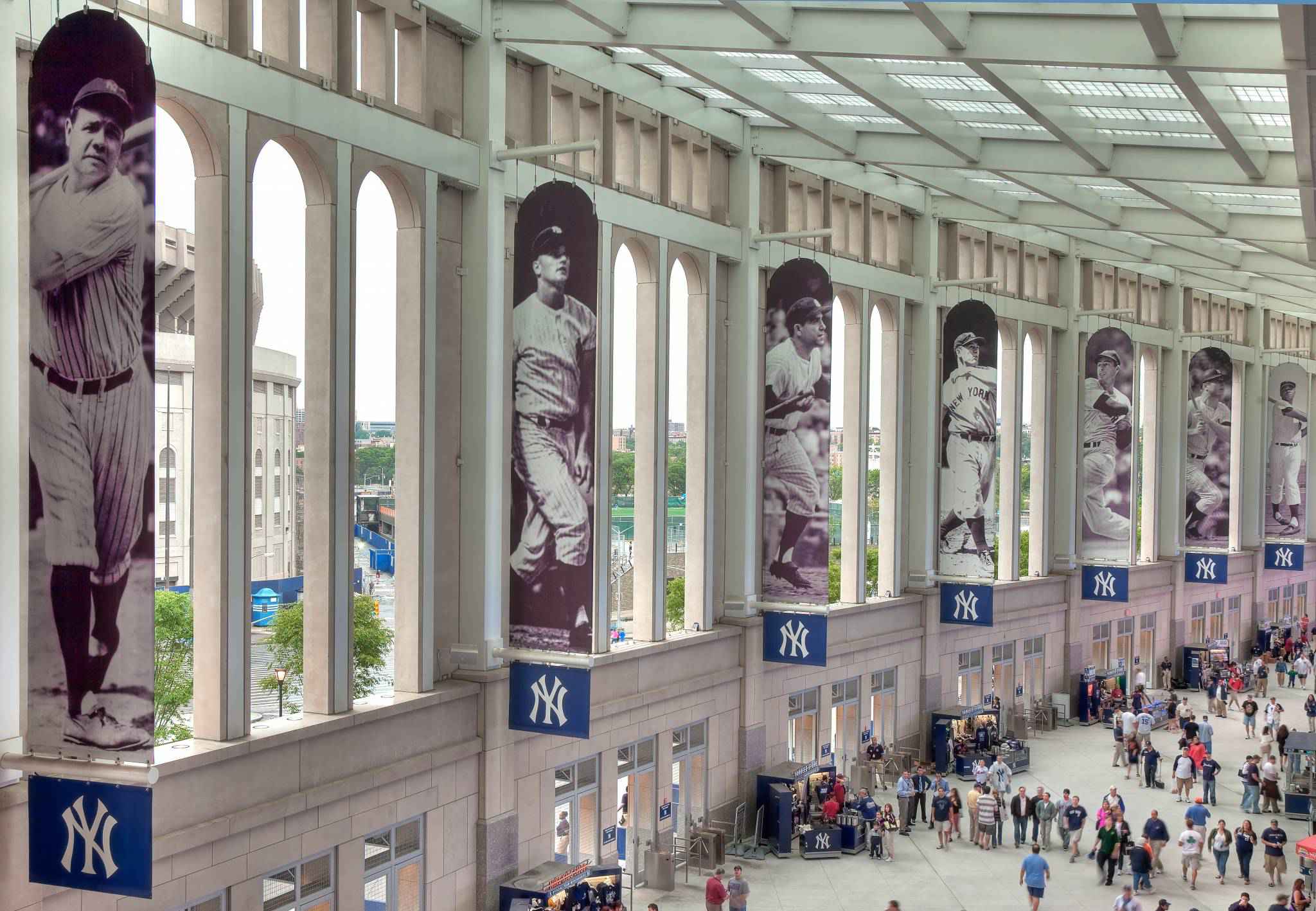 Yankee Stadium is a stadium located in the Bronx, a borough of New York City. It serves as the home ballpark for the New York Yankees of Major League Baseball , and the home stadium of New York City FC of Major League Soccer (MLS). The $2.3 billion stadium, built with $1.2 billion in public subsidies, replaced the original Yankee Stadium in 2009. It is one block north of the original, on the 24-acre former site of Macombs Dam Park; the 8-acre site of the original stadium is now a public park called Heritage Field.
The stadium incorporates replicas of some design elements from the original Yankee Stadium and like its predecessor it has hosted additional events, including college football games, soccer matches, and concerts. Although Yankee Stadium's construction began in August 2006, the project spanned many years and faced many controversies, including the high public cost and the loss of public parkland. The overall price tag makes the new Yankee Stadium the most expensive stadium ever built.

Features
The new stadium is meant to evoke elements of the original Yankee Stadium, both in its original 1923 state and its post-renovation state in 1976. The exterior resembles the original look of the 1923 Yankee Stadium. The interior, a modern ballpark with greater space and increased amenities, features a playing field that closely mimics the 1988–2008 dimensions of the old stadium. The current stadium features 4,300 club seats and 68 luxury suites.

Design and layout
The stadium was designed by the architectural firm Populous. The exterior was made from 11,000 pieces of Indiana limestone, along with granite and pre-cast concrete. It features the building's name V-cut and gold-leaf lettered above each gate. The interior of the stadium is adorned with hundreds of photographs capturing the history of the Yankees. The New York Daily News newspaper partnered with the Yankees for the exhibition "The Glory of the Yankees Photo Collection", which was selected from the Daily News' collection of over 2,000 photographs. Sports & The Arts was hired by the Yankees to curate the nearly 1,300 photographs that adorn the building from sources including the Daily News, Getty Images, the Baseball Hall of Fame and Major League Baseball.

The seats are laid out similar to the original stadium's stands, with grandstand seating that stretches beyond the foul poles, as well as bleacher seats beyond the outfield fences. The Field Level and Main Level comprise the lower bowl, with suites on the H&R Block Level, and the Upper Level and Grandstand Level comprising the upper bowl. Approximately ⅔ of the stadium's seating is in the lower bowl, the inverse from the original Yankee Stadium. 50,287 fans can be seated, with a standing room capacity of 52,325. The new stadium's seating is spaced outward in a bowl, unlike the stacked-tiers design at the old stadium. This design places most fans farther back but lower to the field, by about an average of 30 feet (9.1 m). Over 56 suites are located within the ballpark, triple the amount from the previous stadium. Seats are 19–24 inches (48–61 cm) wide, up from the previous stadium's 18–22-inch (46–56 cm) wide seats, while there is 33–39 inches (84–99 cm) of leg room, up from 29.5 inches (75 cm) of leg room in the previous stadium. Many lower level seats are cushioned, while all seats are equipped with cupholders. To allow for the extra seating space, the stadium's capacity is reduced by more than 4,000 seats in comparison to the previous stadium.

Many design elements of the ballpark's interior are inspired by the original Yankee Stadium. The roof of the new facility features a replica of the frieze that was a trademark of the previous ballpark. In the original Yankee Stadium, a copper frieze originally lined the roof of the upper deck stands, but it was torn down during the 1974–75 renovations and replicated atop the wall beyond the bleachers. The new stadium replicates the frieze in its original location along the upper deck stands. Made of steel coated with zinc for rust protection, it is part of the support system for the cantilevers holding up the top deck and the lighting on the roof. The wall beyond the bleacher seats is "cut out" to reveal the 4 subway trains as they pass by, like they were in the original facility. A manually operated auxiliary scoreboard is built into the left and right field fences, in the same locations it existed in the pre-renovation iteration of the original Yankee Stadium. 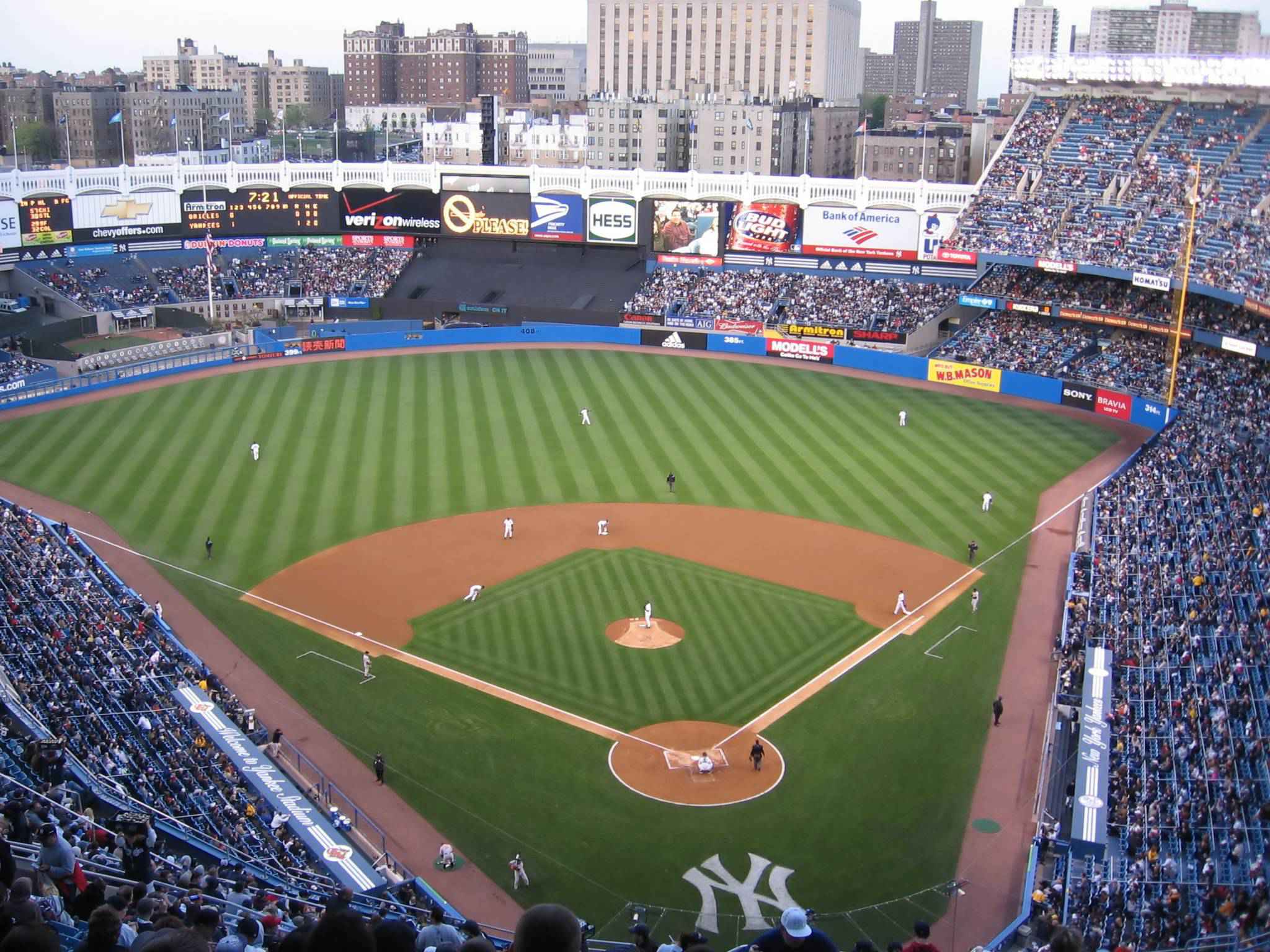