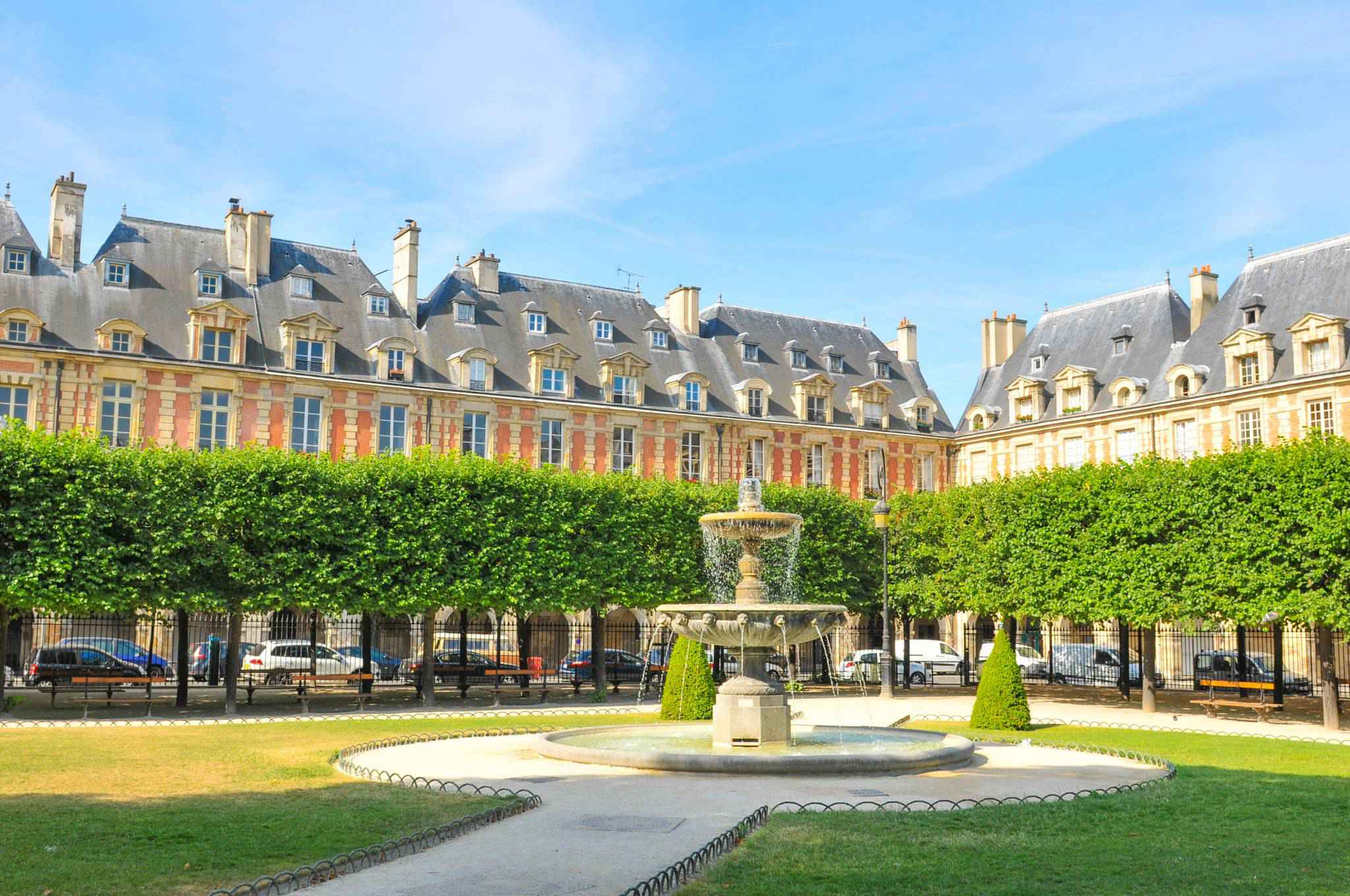 The Place des Vosges is the oldest planned square in Paris and one of the finest in the city. It is located in the Marais district, and it straddles the dividing-line between the 3rd and 4th arrondissements of Paris. It was a very fashionable and and expensive square during the 17th and 18th centuries.

Originally known as the Place Royale, the Place des Vosges was built by Henri IV from 1605 to 1612. A true square (140 m × 140 m), it embodied the first European program of royal city planning. It was built on the site of the Hôtel des Tournelles and its gardens: at a tournament at the Tournelles, a royal residence, Henri II was wounded and died. Catherine de Medicis had the Gothic complex demolished, and she removed to the Louvre Palace.

The Place des Vosges, inaugurated in 1612 with a grand carrousel to celebrate the wedding of Louis XIII and Anne of Austria, is the prototype of all the residential squares of European cities that were to come. What was new about the Place Royale in 1612 was that the housefronts were all built to the same design, probably by Baptiste du Cerceau, of red brick with strips of stone quoins over vaulted arcades that stand on square pillars. The steeply-pitched blue slate roofs are pierced with discreet small-paned dormers above the pedimented dormers that stand upon the cornices. Only the north range was built with the vaulted ceilings that the "galleries" were meant to have. Two pavilions that rise higher than the unified roofline of the square center the north and south faces and offer access to the square through triple arches. Though they are designated the Pavilion of the King and of the Queen, no royal personage has ever lived in the aristocratic square. The Place des Vosges initiated subsequent developments of Paris that created a suitable urban background for the French aristocracy and nobility.

Before the square was completed, Henri IV ordered the Place Dauphine to be laid out. Within a mere five-year period the king oversaw an unmatched building scheme for the ravaged medieval city: additions to the Louvre Palace, the Pont Neuf, and the Hôpital Saint Louis as well as the two royal squares.

Cardinal Richelieu had an equestrian bronze of Louis XIII erected in the center (there were no garden plots until 1680). In the late 18th century, while most of the nobility moved to the Faubourg Saint-Germain district, the square managed to keep some of its aristocratic owners. It was renamed in 1799 when the département of the Vosges became the first to pay taxes supporting a campaign of the Revolutionary army. The Restoration returned the old royal name, but the short-lived Second Republic restored the revolutionary one in 1848.

Today the square is planted with a bosquet of mature lindens set in grass and gravel, surrounded by clipped lindens.

Residents of the Place des Vosges
No. 1bis Madame de Sevigné was born here
No. 6, "Maison de Victor Hugo" Victor Hugo from 1832 to 1848, in what was then the Hôtel de Rohan (The Princes of Guéménée line), now a museum devoted to his memory, managed by the City of Paris
No. 7 Sully, Henri IV's great minister
No. 8 poet Théophile Gautier and writer Alphonse Daudet
No. 9 (Hôtel de Chaulnes), seat of l' Académie d'architecture, currently also tenanted by Galerie Historisimus
No. 11 occupied from 1639-1648 by the courtesan Marion Delorme
No. 14 (Hôtel de la Rivière). Its ceilings painted by Lebrun are reinstalled in the Musée Carnavalet. Rabbi David Feuerwerker, Antoinette Feuerwerker and Atara Marmor
No. 15 Marguerite Louise d'Orléans, wife of Cosimo III de' Medici Grand Duke of Tuscany.
No. 17 former residence of Bossuet
No. 21 Cardinal Richelieu from 1615 to 1627
No. 23 post-impressionist painter Georges Dufrénoy 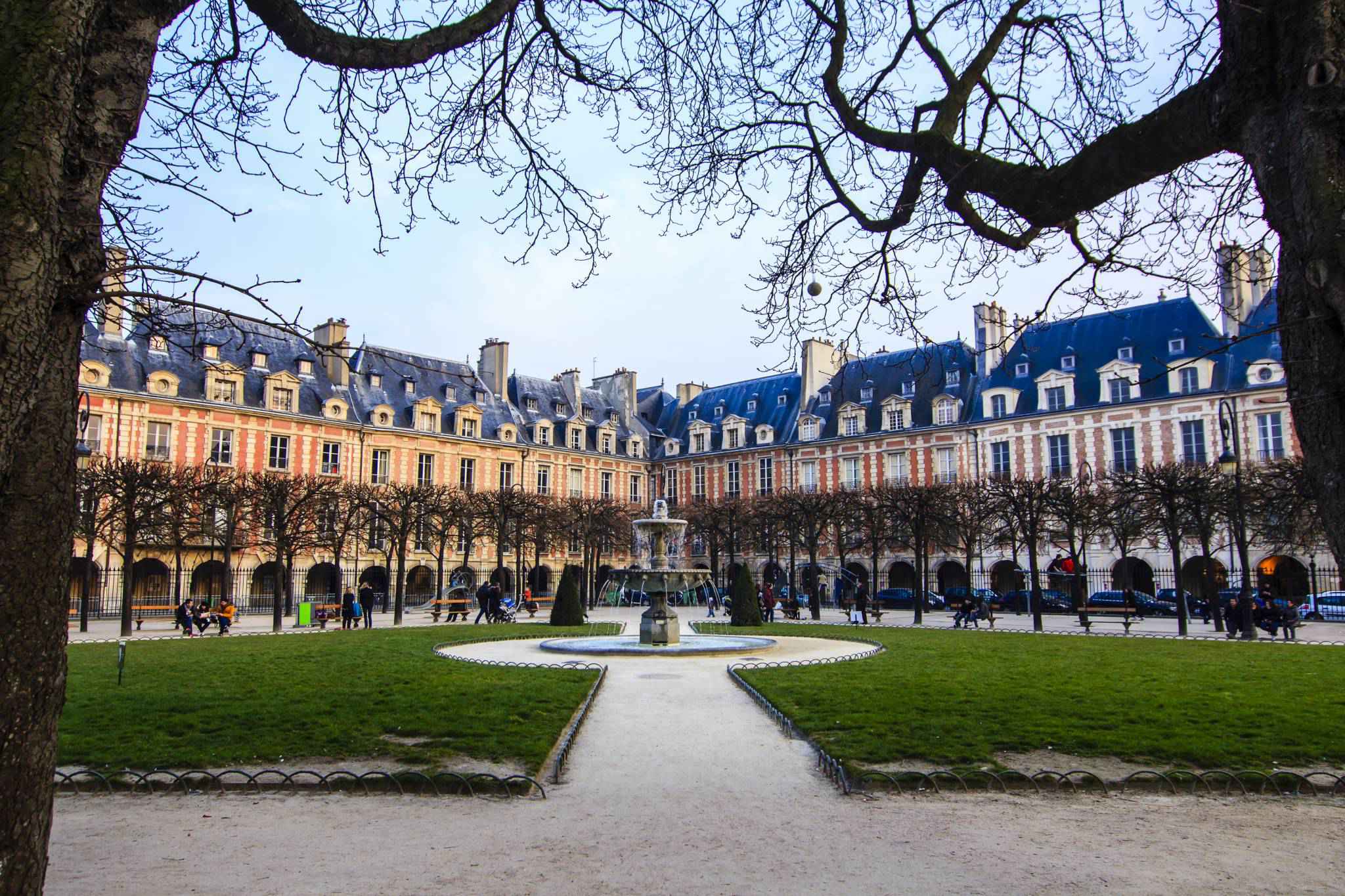