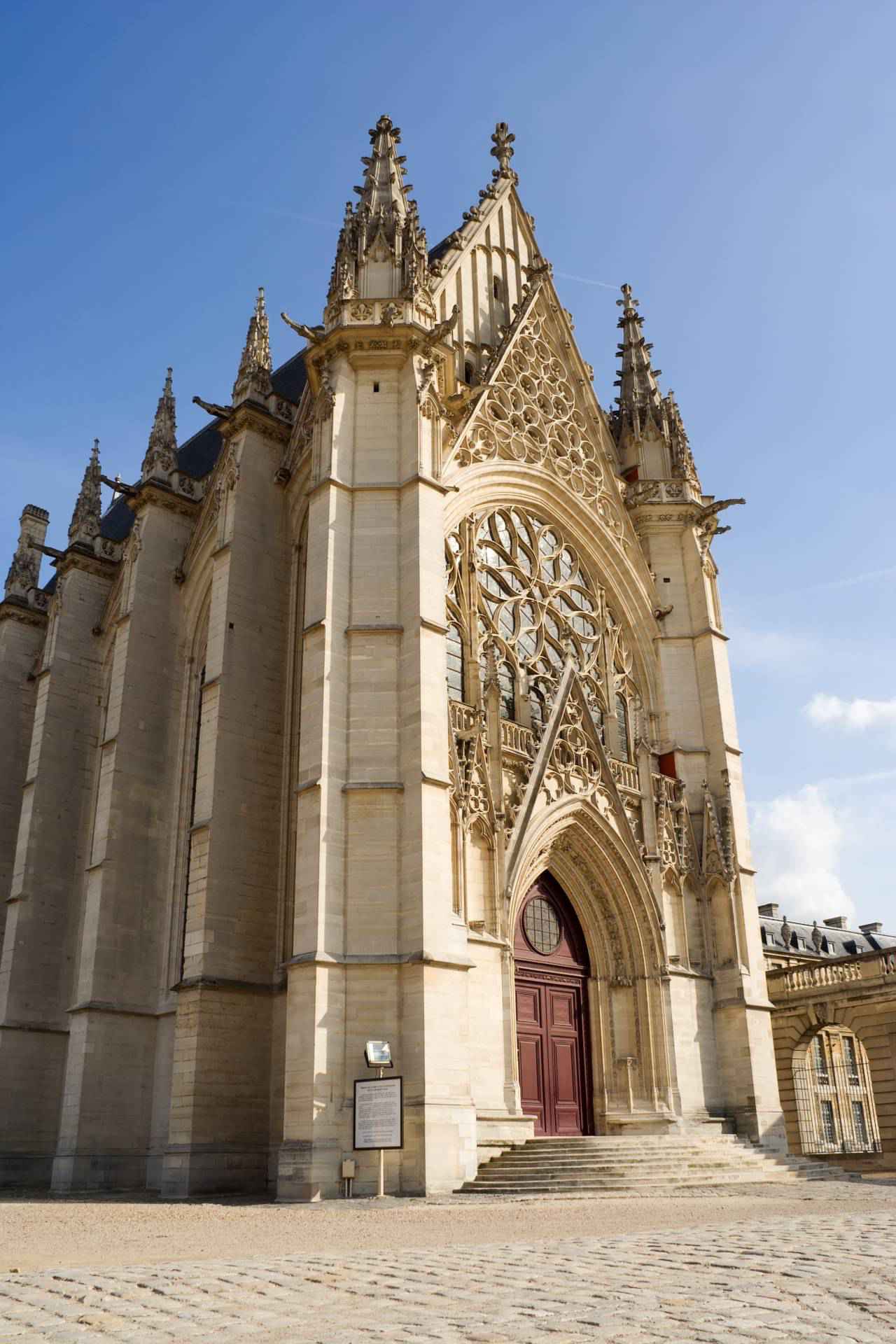 The Sainte-Chapelle is a royal chapel in the Gothic style, within the medieval Palais de la Cité, the residence of the Kings of France until the 14th century, on the Île de la Cité in the heart of Paris, France.

Begun some time after 1238 and consecrated on 26 April 1248, the Sainte-Chapelle is considered among the highest achievements of the Rayonnant period of Gothic architecture. It was commissioned by King Louis IX of France to house his collection of Passion relics, including Christ's Crown of Thorns—one of the most important relics in medieval Christendom.

Along with the Conciergerie, the Sainte-Chapelle is one of the earliest surviving buildings of the Capetian royal palace on the Île de la Cité. Although damaged during the French Revolution, and restored in the 19th century, it has one of the most extensive 13th-century stained glass collection anywhere in the world.

The exterior
The contemporary visitor entering the courtyard of the Royal Palace would have been met by the sight of a grand ceremonial staircase (the Grands Degres) to their right and the north flank and eastern apse of the Sainte-Chapelle to their left. The chapel exterior shows many of the typical characteristics of Rayonnant architecture—deep buttresses surmounted by pinnacles, crocketted gables around the roof-line and vast windows subdivided by bar tracery. The internal division into upper and lower chapels is clearly marked on the outside by a string-course, the lower walls pierced by smaller windows with a distinctive spherical triangle shape. Despite its decoration, the exterior is relatively simple and austere, devoid of flying buttresses or major sculpture and giving little hint of the richness within.

No designer-builder is named in the archives concerned with the construction. In the 19th century it was assumed (as with so many buildings of medieval Paris) to be the work of the master mason Pierre de Montreuil, who worked on the remodelling of the Royal Abbey of Saint-Denis and completed the south transept façade of Notre-Dame Cathedral in Paris. Modern scholarship rejects this attribution in favour of Jean de Chelles or Thomas de Cormont, while Robert Branner saw in the design the hand of an unidentified master mason from Amiens.

The Sainte-Chapelle's most obvious architectural precursors include the apsidal chapels of Amiens Cathedral, which it resembles in its general form, and the Bishop's Chapel (c. 1180s) of Noyon Cathedral, from which it borrowed the two-story design. As has often been argued however the major influence on its overall design seems to have come from contemporary metalwork, particularly the precious shrines and reliquaries made by Mosan goldsmiths.

The interior
The Parisian palatine chapel, built to house a reliquary, was itself like a precious reliquary turned inside out (with the richest decoration on the inside). Although the interior is dominated by the stained glass, every inch of the remaining wall surface and the vault was also richly coloured and decorated. Analysis of remaining paint fragments reveal that the original colours were much brighter than those favoured by the 19th-century restorers and would have been closer to the colours of the stained glass. The quatrefoils of the dado arcade were painted with scenes of saints and martyrs and inset with painted and gilded glass, emulating Limoges enamels, while rich textiles hangings added to the richness of the interior. Above the dado level, mounted on the clustered shafts that separate the great windows, are 12 larger-than-life-sized sculpted stone figures representing the 12 Apostles (six of these are replicas—the damaged originals are now in the Musée du Moyen Age). Each carries a disk marked with the consecration crosses that were traditionally marked on the pillars of a church at its consecration. Niches on the north and south sides of the chapel are the private oratories of the king and of his mother, Blanche of Castile. 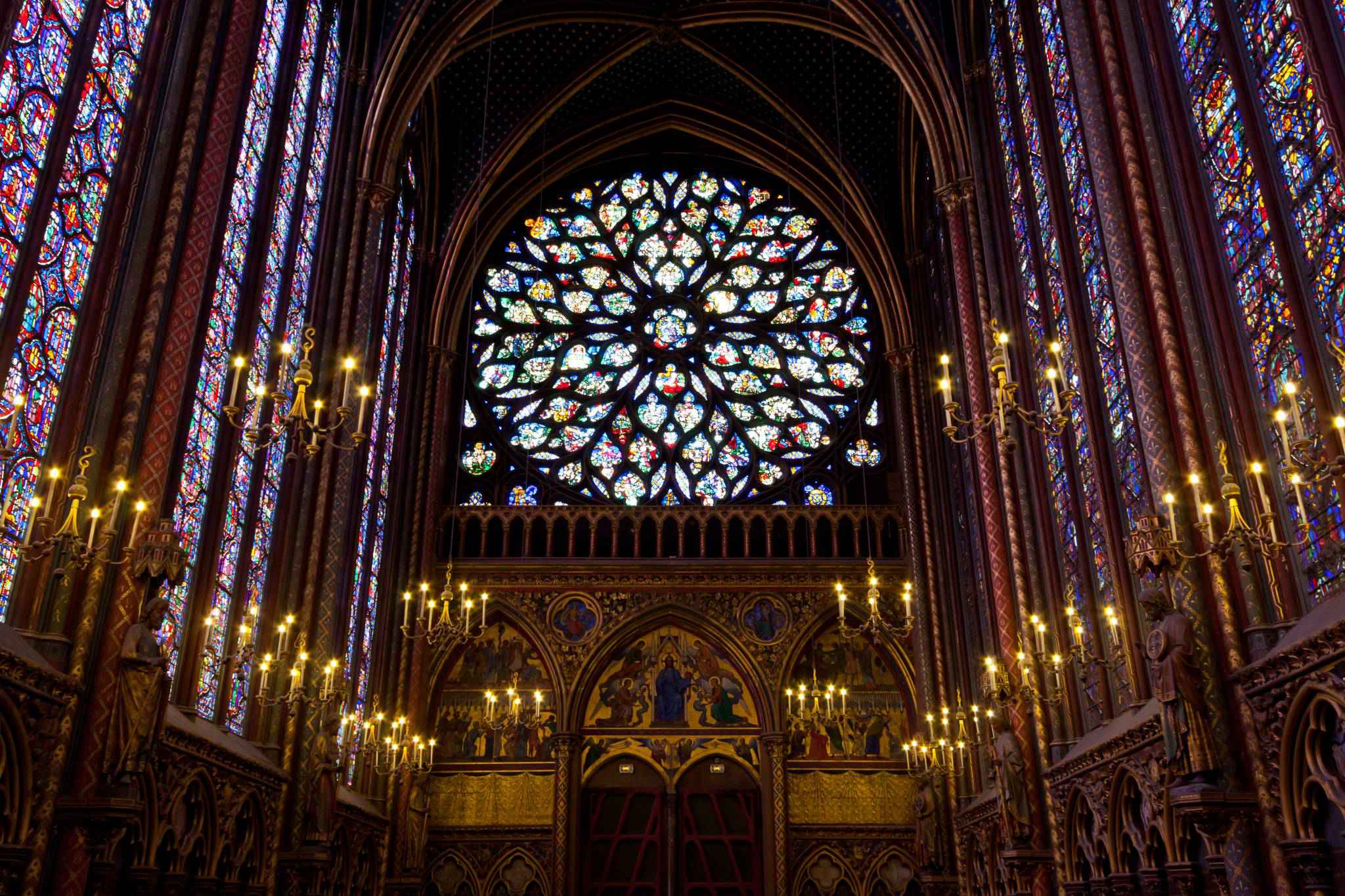