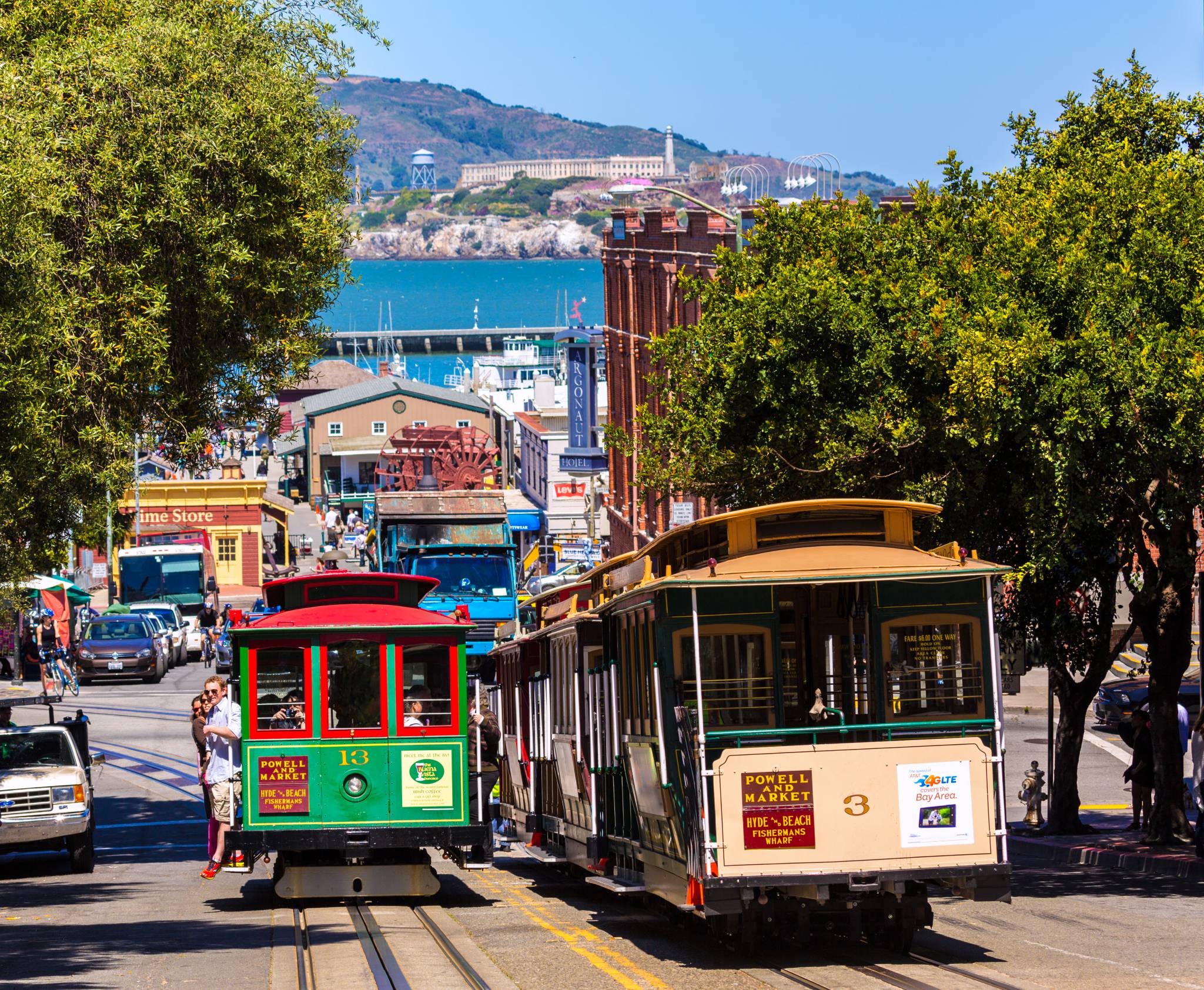 
The San Francisco cable car system is the world's last manually operated cable car system. An icon of San Francisco, the cable car system forms part of the intermodal urban transport network operated by the San Francisco Municipal Railway. Of the 23 lines established between 1873 and 1890, only three remain (one of which combines parts of two earlier lines): two routes from downtown near Union Square to Fisherman's Wharf, and a third route along California Street. While the cable cars are used to a certain extent by commuters, the vast majority of their 7 million annual passengers are tourists. They are among the most significant tourist attractions in the city, along with Alcatraz Island, the Golden Gate Bridge, and Fisherman's Wharf. The cable cars are listed on the National Register of Historic Places.

The cable cars are separate from San Francisco's heritage streetcars, which operate on Market Street and the Embarcadero, as well as from the more modern Muni Metro light rail system.

Network
The current cable car network consists of three routes. Like all Municipal Railway (Muni) routes which have route letters or numbers, the cable lines have route numbers, but the cable routes are generally referred to by the names of the streets on which they travel. The Powell-Hyde and Powell-Mason lines use "single-ended" cars, which must be looped or turned around like a bus at the end of the line; the single-ended cable cars use manual non-powered turntables to rotate the car. There are three street turntables to do this, one at the end of each of the three terminals: at Market & Powell Streets, Taylor & Bay Streets, and Hyde & Beach Streets, with a fourth turntable located inside the car barn on Washington and Jackson Streets.

The Powell-Mason (Line 59) line shares the tracks of the Powell-Hyde line as far as Mason Street, where it crosses Washington and Jackson Streets. Here the line turns right and downhill along Mason Street, briefly half left along Columbus Avenue, and then down Taylor Street to a terminal at Taylor and Bay. This terminus is near to but two blocks back from the waterfront at Fisherman's Wharf. As with the Powell-Hyde, there are manually-powered turntables at each end to reverse the cars. This line is also used greatly by tourists, but also some commuters.

The Powell-Hyde (Line 60) line runs north and steeply uphill from a terminal at Powell and Market Streets, before crossing the California Street line at the crest of the hill. Downhill from this crest it turns left and uphill again along Jackson Street (as this is one-way, cable cars in the opposite direction use the parallel Washington Street), to a crest at Hyde Street. Here it turns right and steeply downhill along Hyde Street to the Hyde and Beach terminal, which is adjacent to the waterfront at the San Francisco Maritime Museum. The line was spliced together using remnant portions of the O'Farrell, Jones & Hyde line and the Washington-Jackson line. Manually-powered turntables turn the cable cars around at the two ends. This line is used greatly by tourists and often has long queues.

The California Street (Line 61) line runs east and west on California Street from a terminal at California and Market Streets, close to the famed Embarcadero to Van Ness Avenue. The California street cable-cars use double-ended cars with "grip" levers at either end of the longer cars which are operated in each direction without the cars being turned at the ends of the line, where the double tracks converge into a single "stub-end" track. The line once ran a much longer distance from Presidio Avenue to Market Street but service west of Van Ness Avenue was discontinued in 1954. Calls to restore the route to its original length are heard from time to time but nothing serious towards this end has been proposed. This route runs only on California Street, running at first uphill to the summit of Nob Hill, then more gently downhill to a terminus at Van Ness Avenue. This line is used to a greater extent by commuters, with majority of passengers on weekdays being commuters. 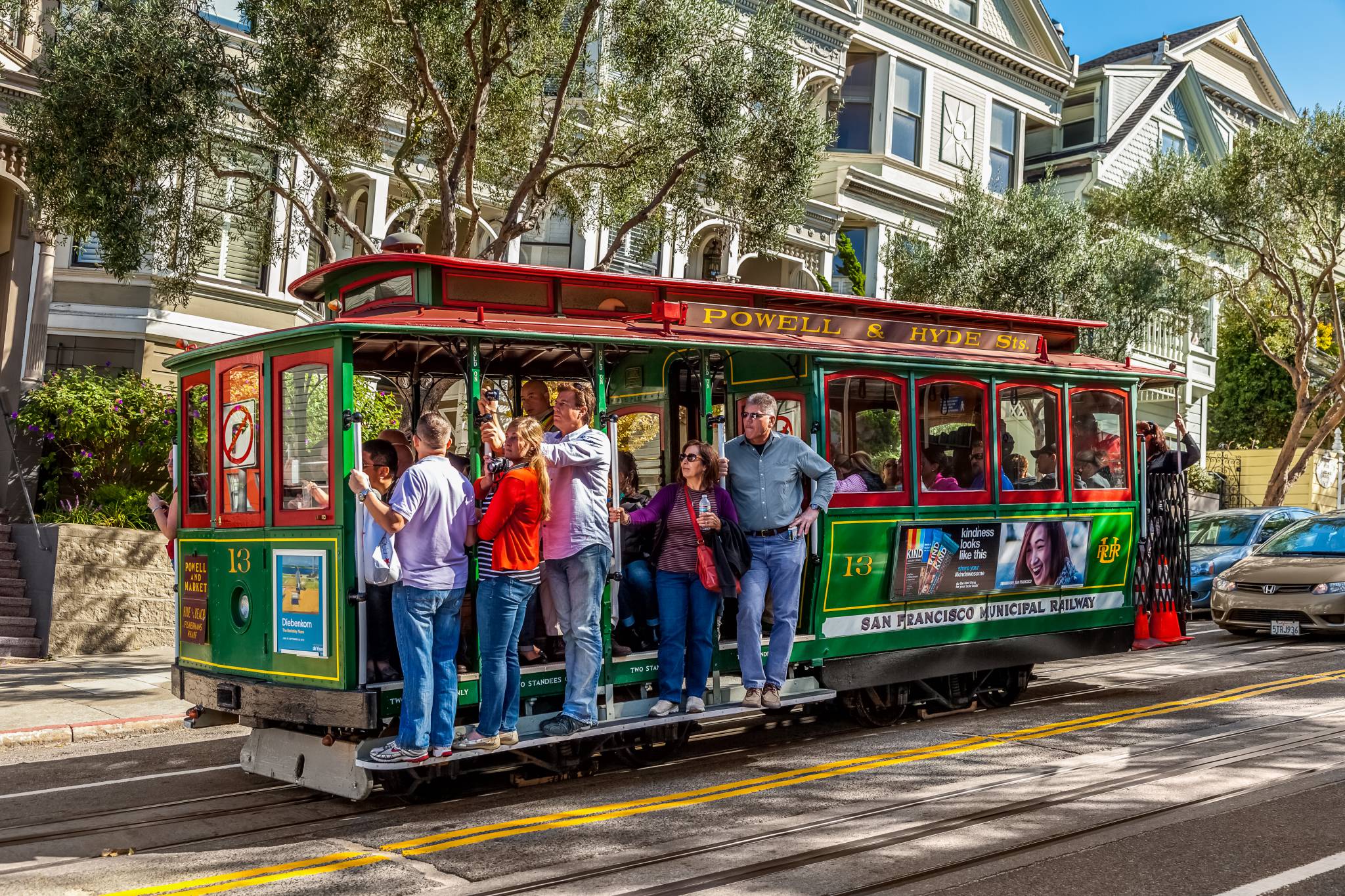