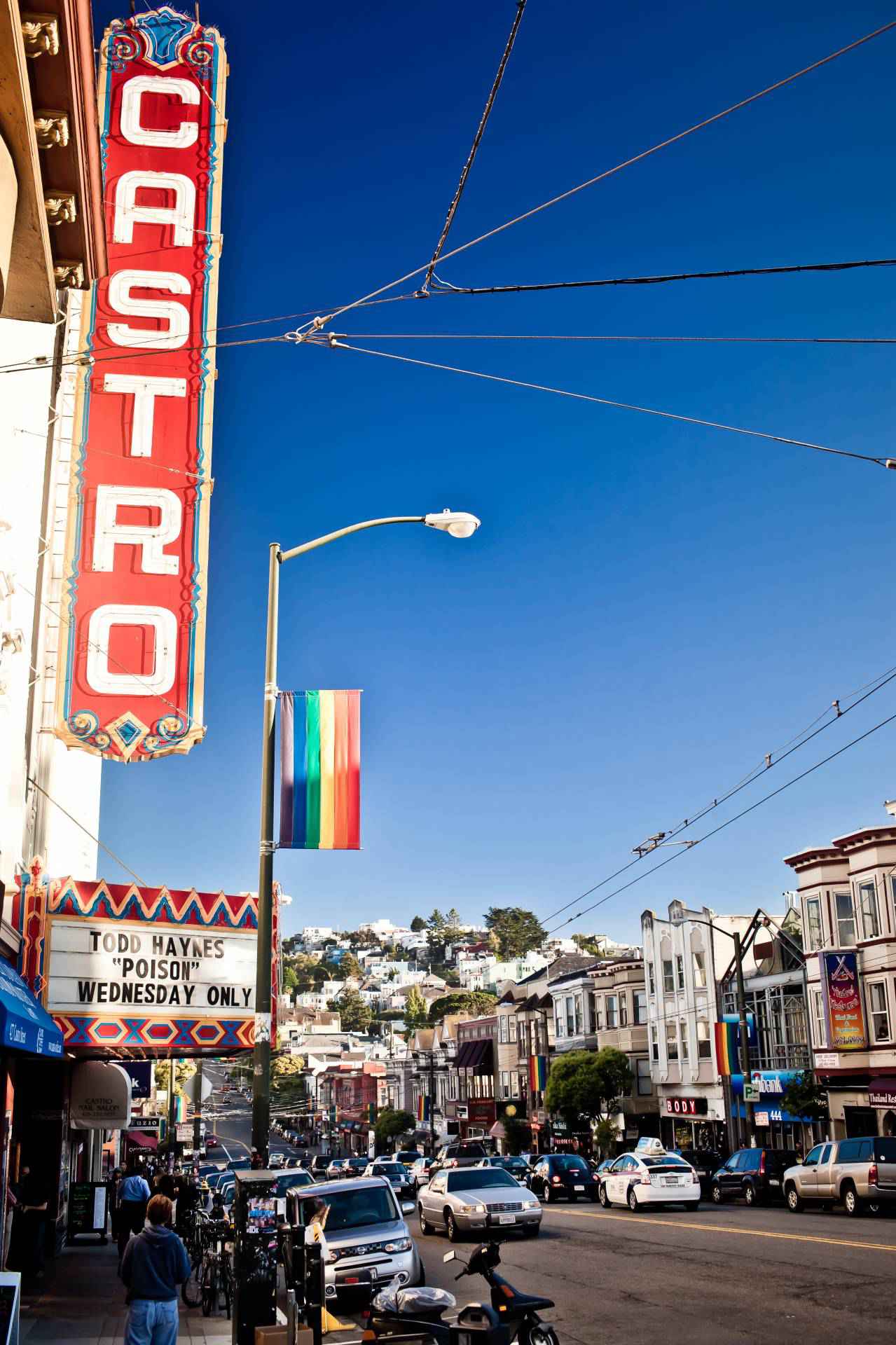 The Castro District, commonly referenced as The Castro, is a neighborhood in Eureka Valley in San Francisco. The Castro was one of the first gay neighborhoods in the United States. Having transformed from a working-class neighborhood through the 1960s and 1970s, the Castro remains one of the most prominent symbols of lesbian, gay, bisexual, and transgender activism and events in the world.

Location
San Francisco's gay village is mostly concentrated in the business district that is located on Castro Street from Market Street to 19th Street. It extends down Market Street toward Church Street and on both sides of the Castro neighborhood from Church Street to Eureka Street. Although the greater gay community was, and is, concentrated in the Castro, many gay people live in the surrounding residential areas bordered by Corona Heights, the Mission District, Noe Valley, Twin Peaks, and Haight-Ashbury neighborhoods. Some consider it to include Duboce Triangle and Dolores Heights, which both have a strong LGBT presence.

Castro Street, which originates a few blocks north at the intersection of Divisadero and Waller Streets, runs south through Noe Valley, crossing the 24th Street business district and ending as a continuous street a few blocks farther south as it moves toward the Glen Park neighborhood. It reappears in several discontinuous sections before ultimately terminating at Chenery Street, in the heart of Glen Park.

LGBT community
The U.S. military dishonorably discharged thousands of gay servicemen from the Pacific theater in San Francisco during World War II (early 1940s) because of their sexuality. Many settled in the bay area, San Francisco and Sausalito. In San Francisco an established gay community had begun in numerous areas including Polk Street, the Tenderloin and south of Market Street. The 1950s saw large amounts of families moving out of the Castro to the suburbs in what became known as the "White flight", leaving open large amounts of real estate and creating attractive locations for gay purchasers. By 1963, the Castro's first gay bar was opened called the "Missouri Mule".

The Castro's age as a gay mecca began during the late 1960s with the Summer of Love in the neighboring Haight-Ashbury district in 1967. The two neighborhoods are separated by a large mountain, topped by Buena Vista Park. The hippie and free love movements had fostered communal living and free society ideas including housing of large groups of people in hippie communes. Androgyny became popular with men even in full beards as gay hippie men began to move into the area. The 1967 gathering brought tens of thousands of middle-class youth from all over the United States to the Haight which saw its own exodus when well-organized individuals and collectives started to see the Castro as an oasis from the massive influx. Many of the hippies had no way to support themselves or places to shelter. The Haight became drug ridden and violent chasing off the gay population who looked for a more stable area to live.

The gay community created an upscale, fashionable urban center in the Castro District in the 1970s. The neighborhood previously known as Eureka Valley, became known as the Castro, after the landmark theatre by that name near the corner of Castro and Market Streets. Many San Francisco gays also moved there after about 1970 from what had been the formerly most prominent gay neighborhood, Polk Gulch, because large Victorian houses were available at low rents or available for purchase for low down payments when their former middle-class owners had fled to the suburbs.

By 1973, Harvey Milk, who would become the most famous resident of the neighborhood, opened a camera store, Castro Camera, and began political involvement as a gay activist, further contributing to the notion of the Castro as a gay destination. Some of the culture of the late 1970s included what was termed the "Castro clone", a mode of dress and personal grooming that exemplified butchness and masculinity of the working-class men in construction—tight denim jeans, black or sand combat boots, tight T-shirt or, often, an Izod crocodile shirt, possibly a red plaid flannel outer shirt, and usually sporting a mustache or full beard—in vogue with the gay male population at the time, and which gave rise to the nickname "Clone Canyon" for the stretch of Castro Street between 18th and Market Streets.

There were numerous famous watering holes in the area contributing to the nightlife, including the Corner Grocery Bar, Toad Hall, the Pendulum, the Midnight Sun, Twin Peaks, and the Elephant Walk. A typical daytime street scene of the period is perhaps best illustrated by mentioning the male belly dancers who could be found holding forth in good weather at the corner of 18th and Castro on "Hibernia Beach", in front of the financial institution from which it drew its name. Then at night, after the bars closed at 2 AM, the men remaining at that hour often would line up along the sidewalk of 18th Street to indicate that they were still available to go home with someone (aka The Meat Rack).

The area was hit hard by the HIV/AIDS crisis of the 1980s. Beginning in 1984, city officials began a crackdown on bathhouses and launched initiatives that aimed to prevent the spread of AIDS. Kiosks lining Market Street and Castro Street now have posters promoting safe sex and testing right alongside those advertising online dating services.

Attractions
One of the more notable features of the neighborhood is Castro Theatre, a movie palace built in 1922 and one of San Francisco's premier movie houses.

18th and Castro is a major intersection in the Castro, where many historic events, marches, protests have taken and continue to take place.

A major cultural destination in the neighborhood is the GLBT History Museum, which opened for previews on Dec. 10, 2010, at 4127 18th St. The first full-scale, stand-alone museum of lesbian, gay, bisexual and transgender history in the United States (and only the second in the world after the Schwules Museum in Berlin), The GLBT History Museum is a project of the GLBT Historical Society.

The F Market heritage streetcar line turnaround at Market and 17th-streets where the Jane Warner city park let sits. Across Castro street is the Harvey Milk Plaza in honor of its most famous resident with its iconic giant flag pole with an oversized rainbow flag, symbol of the LGBT community. Below street level is the main entrance to the Castro Street Station, a Muni Metro subway station and a multitiered park. Milk's camera store and campaign headquarters which were at 575 Castro has a memorial plaque and mural on the inside of the store, now housing the Human Rights Campaign Action Center and Store. There is a smaller mural above the sidewalk on the building showing Milk looking down on the street fondly.

Across Market Street from Harvey Milk Plaza, and slightly up the hill, is the Pink Triangle Park – 17th Street at Market, a city park and monument named after the pink triangles forcibly worn by gay prisoners persecuted by the Nazis during World War II.

Harvey's was formerly the Elephant Walk, raided by police after the White Night Riots.

The Hot Cookie Bakery located on Castro Street is a world-famous destination serving some of the city's most interestingly shaped cookies. It is especially known for its coconut macaroons.

Twin Peaks is the first gay bar in the city, and possibly the United States, with plate glass windows to fully visibly expose patrons to the public is located at the intersection of Market and Castro.

The Hartford Street Zen Center is also located in the Castro, as well as the Most Holy Redeemer Catholic Church, 100 Diamond Street.

A LGBT Walk of Fame was installed in August 2014 with an inaugural 20 sidewalk plaques representing past LGBT icons in their field, who continue to serve as inspirations. The walk is originally planned to coincide with the business district of the Castro and eventually include 500 bronze plaques.

The main business section of Castro St from Market to 19th street were under reconstruction and repaving in 2014 to address a number of neighborhood concerns. The area has heavy vehicular traffic as well as many visitors. As part of the work the sidewalks were widened and new trees were planted. Additionally 20 historical cement etchings covering from the inception to the area being settled to the 2010s sweeping gay marriage movement victories will be installed in September 2014.

LGBT tourism
San Francisco has a large and thriving tourist economy due to ethnic and cultural communities such as Chinatown, North Beach, Haight-Ashbury and the Castro. The Castro is a site of economic success that brings in capital all year round with many events catered to the gay community along with everyday business.

The Castro is a "thriving marketplace for all things gay" meaning everything in the area is catered to people who identify with LGBT culture and other associated meanings to the word gay. There are cafes, the Castro Theater, and many businesses that cater to or openly welcome LGBT consumers. These establishments make the Castro an area of high spending and lead to high tourist traffic. In addition to the city's locals people travel to visit the shops and restaurants as well as the events that take place such as the Castro Street Fair. Events such as the fairs drum up business for the community and bring in people from all over the nation who visit solely for the atmosphere the Castro provides. People who do not necessarily feel comfortable expressing themselves in their own community have the freedom to travel to places such as the Castro to escape the alienation and feel accepted. There is a sense of belonging and acceptance that is promoted throughout the district to accommodate non-heteronormative people that many LGBT travellers are attracted to.

The Golden Gate Business Association (GGBA) was created in 1974 to help promote the Castro as a place for tourists, but also San Francisco and LGBT businesses as a whole. The GGBA sought to gain local political power and hoped to achieve their gains through an increase in gay tourism. This association formed the San Francisco Gay Tourism and Visitor's Bureau in 1983. Politically, the Bureau was neoliberal and focused on economic interests while denying poverty and prejudice. The LGBT tourism industry drives and benefits the economy due to the constant influx of consumers. 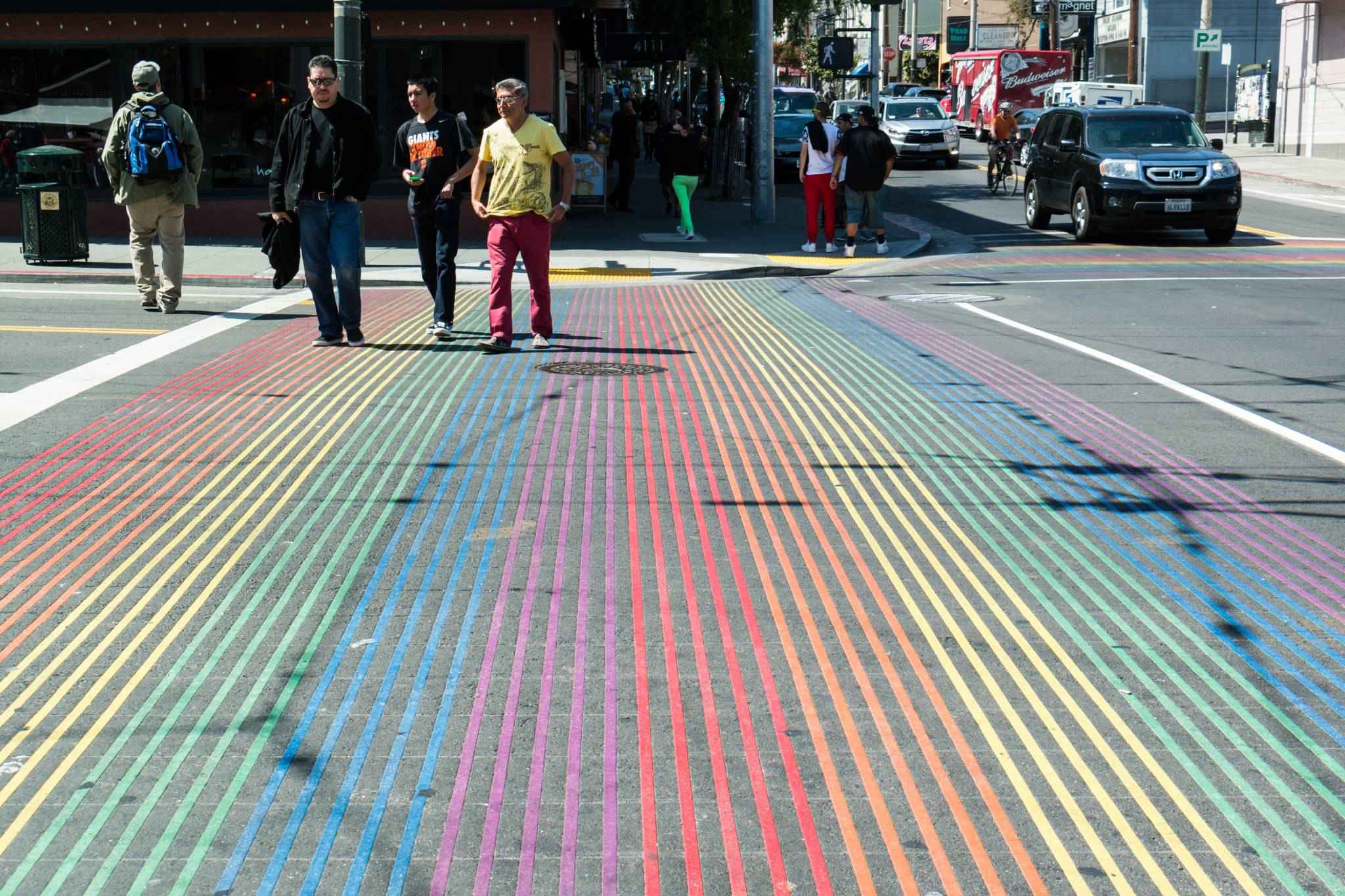