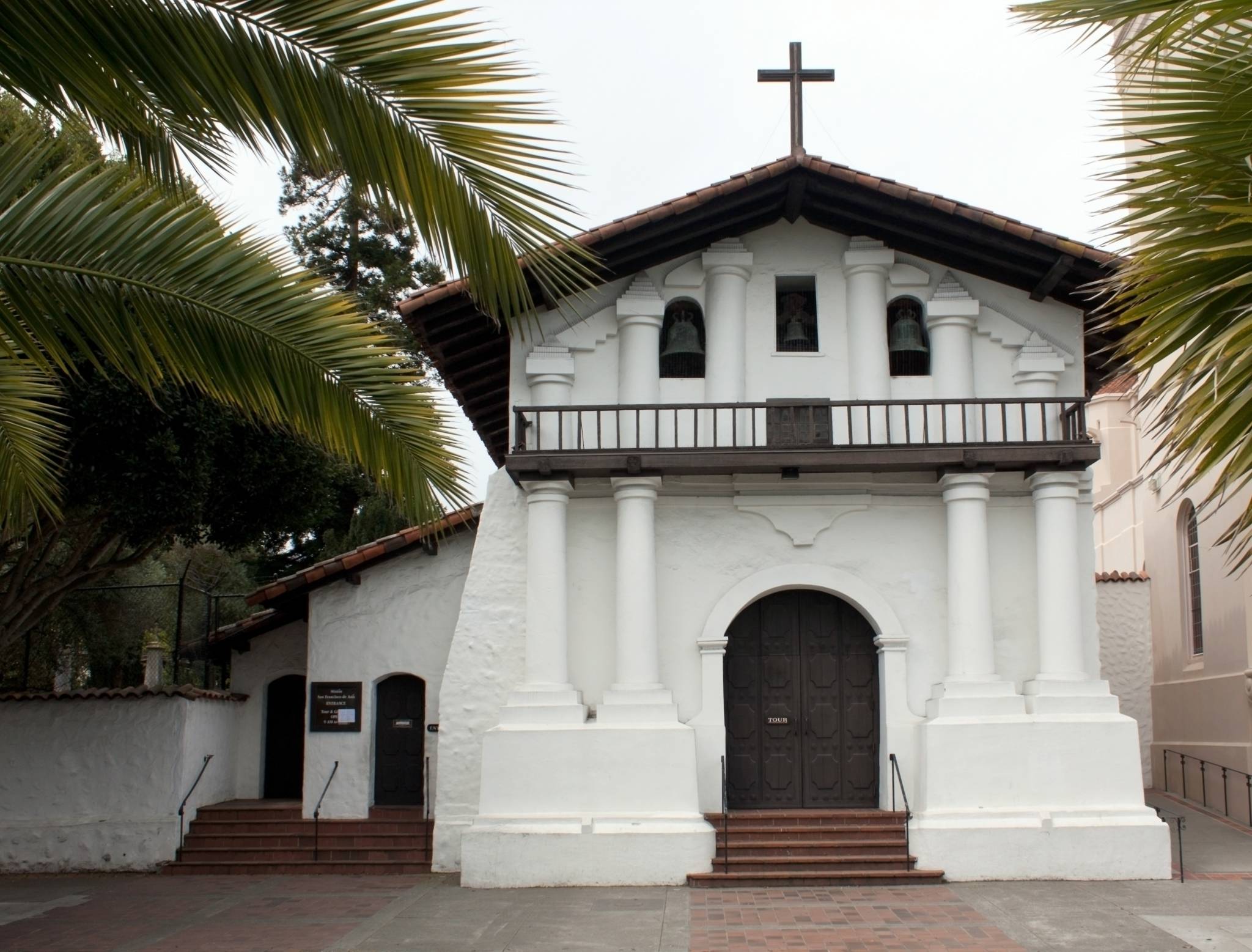 Mission San Francisco de Asís, or Mission Dolores, is the oldest surviving structure in San Francisco and the sixth religious settlement established as part of the California chain of missions. The Mission was founded on October 9, 1776, by Lieutenant José Joaquin Moraga and Francisco Palóu (a companion of Junípero Serra), both members of the de Anza Expedition, which had been charged with bringing Spanish settlers to Alta (upper) California and with evangelizing the local Natives, the Ohlone. Some of the Mission's buildings have been turned into businesses, including a print shop and several saloons.

The settlement was named for St. Francis of Assisi, the founder of the Franciscan Order, but was also commonly known as "Mission Dolores" owing to the presence of a nearby creek named Arroyo de Nuestra Señora de los Dolores, meaning "Our Lady of Sorrows Creek." During the expedition of Juan Bautista de Anza, this site was identified by Pedro Font as the most suitable site for a mission in the San Francisco area.

The original Mission was a small structure dedicated on October 9, 1776, after the required church documents arrived. It was located near what is today the intersection of Camp and Albion Streets (according to most sources),[citation needed] about a block-and-a-half east of the surviving Adobe Mission building, and on the shores of a lake (supposedly long since filled) called Laguna de Los Dolores. A historical marker at that location depicts this lake, but whether it ever actually existed is a matter of some dispute. (Creek geologists Janet Sowers and Christopher Richard propose that the legendary lake is the result of misunderstandings of Juan Bautista de Anza's 1776 writings. According to their 2011 hydrological map, there were no lakes in the area, only creeks.)

The present Mission church, near what is now the intersection of Dolores and 16th Streets, was dedicated in 1791. At the time of dedication, a mural painted by native labor adorned the focal wall of the chapel. The Mission was constructed of adobe and was part of a complex of buildings used for housing, agricultural, and manufacturing enterprises (see architecture of the California missions). Though most of the Mission complex, including the quadrangle and Convento, has either been altered or demolished outright during the intervening years, the façade of the Mission chapel has remained relatively unchanged since its construction in 1782–1791.

At its peak in 1810–1820, the average Indian population at Pueblo Dolores was about 1,100 people. The California missions were not only houses of worship. They were farming communities, manufacturers of all sorts of products, hotels, ranches, hospitals, schools, and the centers of the largest communities in the state. In 1810 the Mission owned 11,000 sheep, 11,000 cows, and thousands of horses, goats, pigs, and mules. Its ranching and farming operations extended as far south as San Mateo and east to Alameda. Horses were corralled on Potrero Hill, and the milking sheds for the cows were located along Dolores Creek at what is today Mission High School. Twenty looms were kept in operation to process wool into cloth. The circumference of the Mission's holdings was said to have been about 125 miles.

The Mission chapel, along with "Father Serra's Church" at Mission San Juan Capistrano, is one of only two surviving buildings where Junípero Serra is known to have officiated (although "Dolores" was still under construction at the time of Serra's visit). In 1817, Mission San Rafael Arcángel was established as an Asistencia to act as a hospital for the Mission, though it would later be granted full mission status in 1822. The Mexican War of Independence (1810–1821) strained relations between the Mexican government and the California missions. Supplies were scant, and the Indians who worked at the missions continued to suffer terrible losses from disease and cultural disruption (more than 5,000 Indians are thought to have been buried in the cemetery adjacent to the Mission). In 1834, the Mexican government enacted secularization laws whereby most church properties were sold or granted to private owners. In practical terms, this meant that the missions would hold title only to the churches, the residences of the priests, and a small amount of land surrounding the church for use as gardens. In the period that followed, Mission Dolores fell on very hard times. By 1842, only eight Christian Indians were living at the Mission.

The California Gold Rush brought renewed activity to the Mission Dolores area. In the 1850s, two plank roads were constructed from what is today downtown San Francisco to the Mission, and the entire area became a popular resort and entertainment district. Some of the Mission properties were sold or leased for use as saloons and gambling halls. Racetracks were constructed, and fights between bulls and bears were staged for crowds. The Mission complex also underwent alterations. Part of the Convento was converted to a two-story wooden wing for use as a seminary and priests' quarters, while another section became the "Mansion House," a popular tavern and way station for travelers. By 1876, the Mansion House portion of the Convento had been razed and replaced with a large Gothic Revival brick church, designed to serve the growing population of immigrants who were now making the Mission area their home.

During this period, wood clapboard siding was applied to the original adobe chapel walls as both a cosmetic and a protective measure; the veneer was later removed when the Mission was restored. During the 1906 San Francisco earthquake, the adjacent brick church was destroyed. By contrast, the original adobe Mission, though damaged, remained in relatively good condition. However, the ensuing fire touched off by the earthquake reached almost to the Mission's doorstep. To prevent the spread of flames, the Convent and School of Notre Dame across the street was dynamited by firefighters; nevertheless, nearly all the blocks east of Dolores Street and north of 20th street were consumed by flames. In 1913, construction began on a new church (now known as the Mission Dolores Basilica) adjacent to the Mission, which was completed in 1918. This structure was further remodeled in 1926 with churrigueresque ornamentation inspired by the Panama-California Exposition held in San Diego's Balboa Park. A sensitive restoration of the original adobe Mission was undertaken in 1917 by architect Willis Polk. In 1952, San Francisco Archbishop John J. Mitty announced that Pope Pius XII had elevated Mission Dolores to the status of a Minor Basilica. This was the first designation of a basilica west of the Mississippi and the fifth basilica named in the United States. Today, the larger, newer church is called "Mission Dolores Basilica" while the original adobe structure retains the name of Mission Dolores.

The San Francisco de Asís cemetery, which adjoins the property on the south side, was originally much larger than its present boundaries, running west almost to Church Street and north into what is today 16th Street. It was reduced in various stages, starting with the extension of 16th Street through the former mission grounds in 1889, and later by the construction of the Mission Dolores Basilica Center and the Chancery Building of the Archdiocese of San Francisco in the 1950s. Some remains were reburied on-site in a mass grave, while others were relocated to various Bay Area cemeteries. Today, most of the former cemetery grounds are covered by a paved playground behind the Mission Dolores School. The cemetery that currently remains underwent a careful restoration in the mid-1990s. The mission is still an active church, and hosts Mass and other services in the mission church and the larger adjacent basilica. The mission is open to visitors, and is located on Dolores Street near its intersection with 16th Street. The San Francisco neighborhood closely surrounding the historic Mission is known as Mission Dolores, and the much larger Mission District is named for it as well. The current Pastor of Mission Dolores is Reverend Francis Mark P. Garbo. The current Curator of Mission Dolores is Andrew A. Galvan.

Statue of Junipero Serra
A full-length portrait sculpture of Junípero Serra is on the property of the mission. The cast stone sculpture, by Arthur Putnam, was completed in 1909, cast between 1916–1917 and installed in 1918 when the mission was remodeled. Funding for the piece came from D.J. McQuarry and it cost $500 to cast. It is approximately H. 6 ft. 6 in. The sculpture depicts Serra wearing a monk's robe belted at the waist with a knotted rope and a rosary around his neck. He looks down, with his head bowed and eyes downward. The sculpture is on a concrete base. It is one of a series of allegorical figures commissioned by the estate of E. W. Scripps to depict California history. In 1993 it was examined by the Smithsonian Institution's Save Outdoor Sculpture! program. The program determined that the sculpture was well maintained. 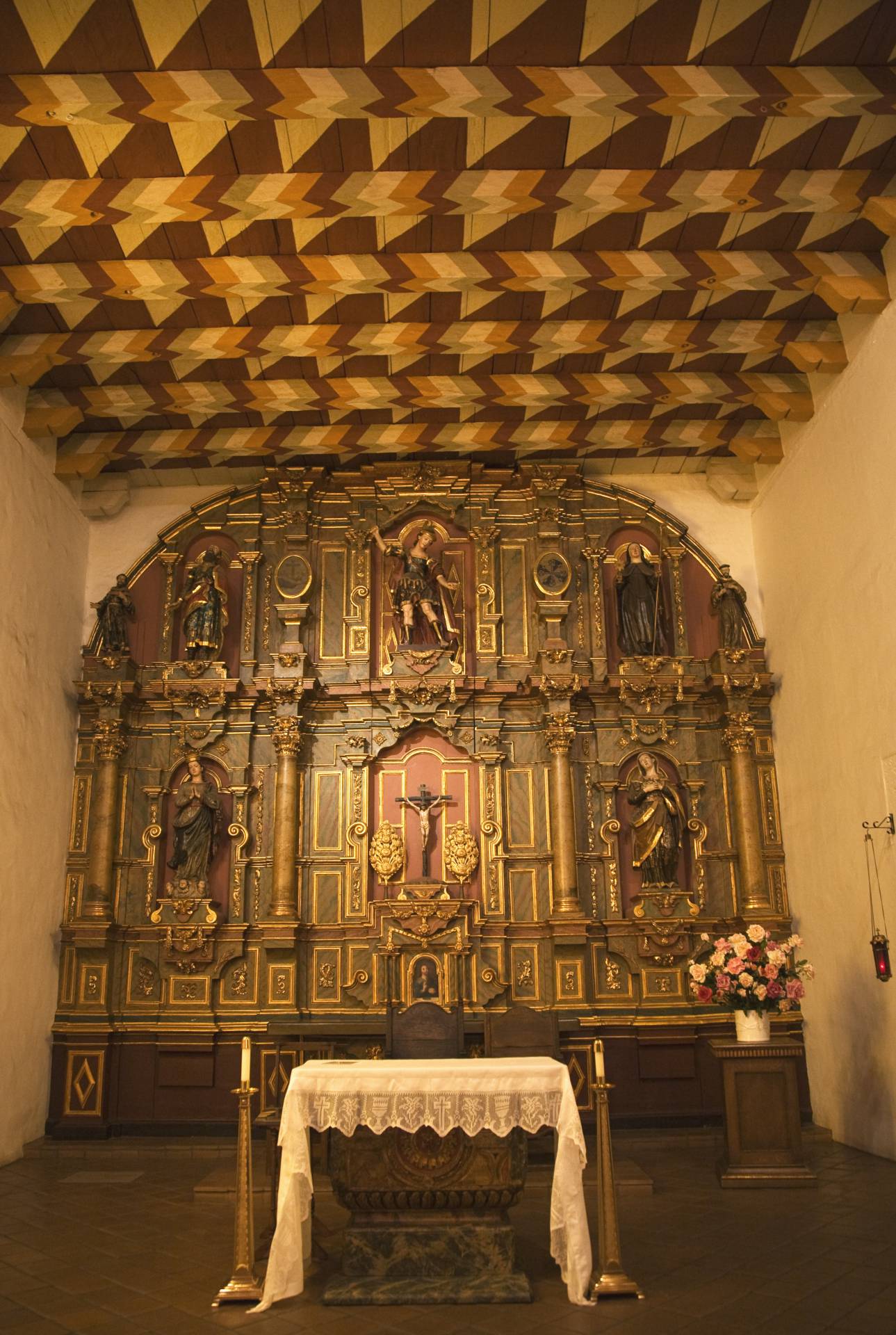