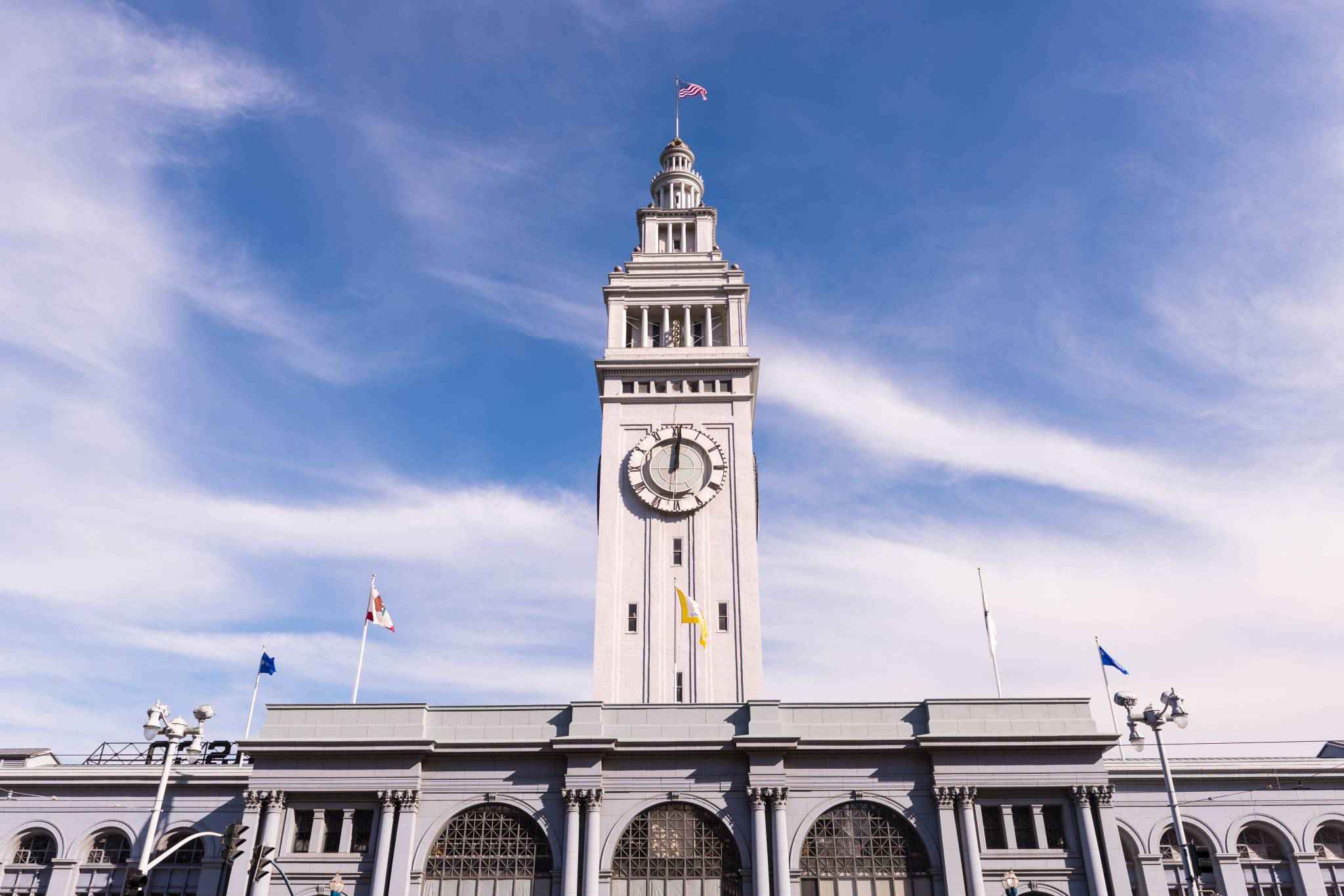 On top of the building is a 245-foot tall clock tower with four clock dials, each 22 feet in diameter, which can be seen from Market Street, a main thoroughfare of the city.
Designed in 1892 by American architect A. Page Brown in the Beaux Arts style, the ferry building was completed in 1898. At its opening, it was the largest project undertaken in the city up to that time. Brown designed the clock tower after the 12th-century Giralda bell tower in Seville, Spain, and the entire length of the building on both frontages is based on an arched arcade.

With decreased use since the 1950s, after bridges were constructed across the bay to carry passenger traffic, the building was adapted to office use and its public spaces broken up. In 2002, a restoration and renovation were undertaken to redevelop the entire complex. The 660-foot long Great Nave was restored, together with its height and materials. A marketplace was created on the ground floor, the former baggage handling area. The second and third floors were adapted for office and Port Commission use. During daylight, on every full and half-hour, the clock bell chimes portions of the Westminster Quarters. The ferry terminal is a designated San Francisco landmark and is listed on the National Register of Historic Places.

Architecture
The present structure was designed in 1892 by A. Page Brown, a New York architect who had started with McKim, Mead & White, and later moved to California. Influenced by studies at the École des Beaux-Arts in Paris, he designed the clock tower after the 12th-century Giralda bell tower in Seville, Spain.

Brown designed it to satisfy needs of an industrial society in high style associated with traditional buildings; the entire base is an arched arcade reminiscent of European buildings. The highest quality materials were used, such as marble and mosaics for the state seal. The 660-foot-long Great Nave on the second floor was the major public space for arriving and departing ferry passengers.

Clocks
The original clock mechanism was refurbished in 2000; it is complete and intact, despite two previous modifications. The Ferry Building has its original Special #4 clock made in 1898 by the Boston clock maker E. Howard. It is the largest wind-up, mechanical dial clock in the world. The four dials are each twenty-two feet in diameter, and a portion of the dial appears to be back-lit at night. This is the effect of two concentric dials on each clock face, in which the inner dial is lit and visible at night.

Although the hands and a small portion of the works are now powered by an accurate electric motor, the entire clock mechanism is still there. The huge weight hangs in its 48-foot (15 m) shaft; once wound, it formerly kept the clock running for eight days. The 16-foot (5 m) pendulum also remains, but it is motionless, replaced by more modern, reliable, and accurate electric power. There is also a set of horn loudspeakers above the clock that play Westminster Chimes on the hour.

Ferry Plaza Farmers' Market & Ferry Building Marketplace
San Francisco's best-known farmers' market is held on the grounds around the building on Saturdays from 8 am to 2 pm PT (08:00 to 14:00), and on Tuesdays and Thursdays from 10 am to 2 pm PT (10:00–14:00), year-round. Outside, a roadway allows pedestrian access to the restaurant and ferry dock behind the building.

Transit connections
San Francisco Municipal Railway's E Embarcadero and F Market & Wharves heritage railway lines have a station located on the pedestrian plaza in front of the Ferry Building.
In addition, the main line of the Bay Area Rapid Transit system runs under the building. The dock area on the eastern side is used as the transition point from the Transbay Tube to the Market Street Subway. The Embarcadero Station a block away is a BART and Muni Metro station; it connects the terminal with the city, East Bay and Peninsula.
The terminal is also served by Vallejo Baylink buses (operated by SolTrans) and Amtrak Thruway Motorcoach. 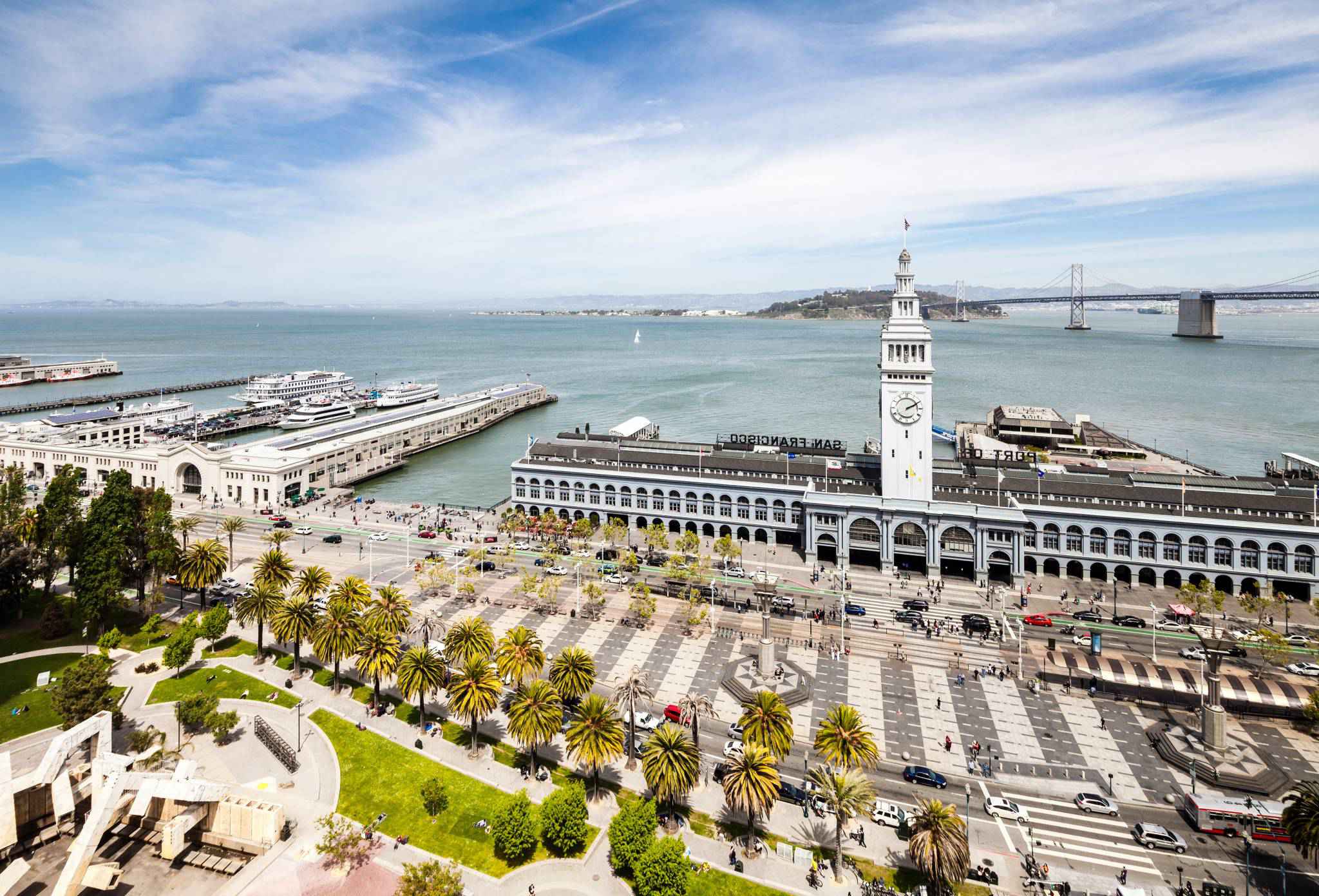