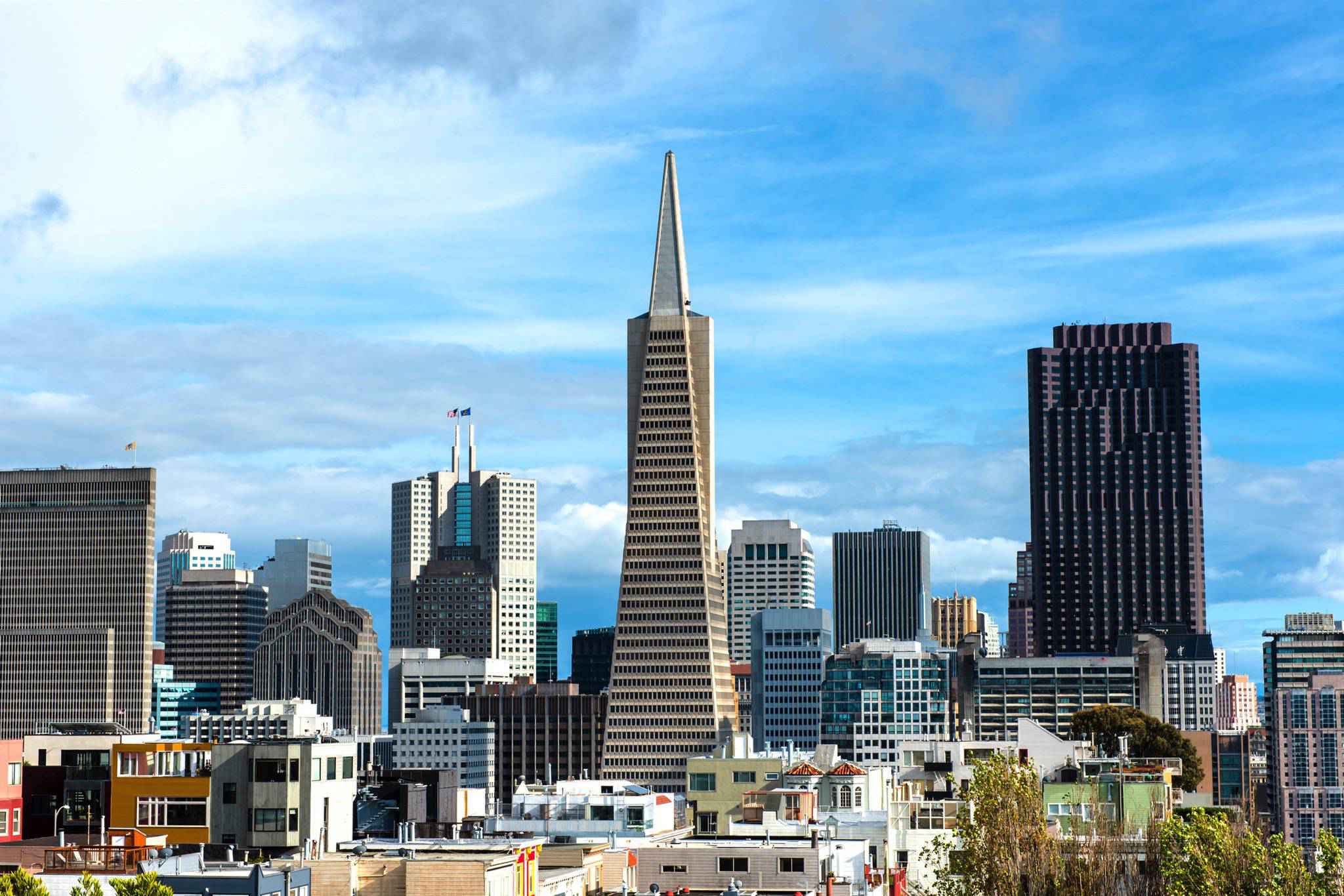 The Transamerica Pyramid is the tallest skyscraper in the San Francisco skyline. The building no longer houses the headquarters of the Transamerica Corporation, which moved their U.S. headquarters to Baltimore, Maryland, but it is still associated with the company and is depicted in the company's logo. Designed by architect William Pereira and built by Hathaway Dinwiddie Construction Company, at 853 ft , on completion in 1972 it was the eighth tallest building in the world.

Design
The land use and zoning restrictions for the parcel limited the number of square feet of office that could be built upon the lot, which sits at the north boundary of the financial district.

The building is a tall, four-sided pyramid with two "wings" to accommodate an elevator shaft on the east and a stairwell and a smoke tower on the west. The top 212 feet (65 m) of the building is the spire. There are four cameras pointed in the four cardinal directions at the top of this spire forming a virtual observation deck. Four monitors in the lobby, whose direction and zoom can be controlled by visitors, display the cameras' views 24 hours a day. An observation deck on the 27th floor was closed after the September 11, 2001 attacks, and replaced by the virtual observation deck.

The top of the Transamerica Pyramid is covered with aluminum panels. During the Christmas holiday season, and on Independence Day and the anniversary of the September 11, 2001 attacks, a brightly twinkling beacon called the "Crown Jewel" is lit at the top of the pyramid.
Specifications
The building's façade is covered in crushed quartz, giving the building its light color.

The building's foundation is 9 feet (2.7 m) thick, the result of a 3 day, 24-hour continuous concrete pour. Several thousand dollars in quarters and change were thrown into the pit by observers surrounding the site at street level during the pouring, for good luck.
Only two of the building's 18 elevators reach the top floor.

The original proposal was for a 1,150 ft (350 m) building, which for a year would have been the second-tallest completed building in the world. The proposal was rejected by the city planning commission, saying it would interfere with views of San Francisco Bay from Nob Hill.

The building is on the site that was the temporary home of A.P. Giannini's Bank of Italy after the 1906 San Francisco earthquake destroyed its office. Giannini founded Transamerica in 1928 as a holding company for his financial empire. Bank of Italy later became Bank of America.
There is a plaque commemorating two famous dogs, Bummer and Lazarus, at the base of the building.

The hull of the whaling vessel Niantic, an artifact of the 1849 California Gold Rush, lay almost beneath the Transamerica Pyramid, and the location is marked by a historical plaque outside the building (California Historical Landmark #88).

The aluminum cap is indirectly illuminated from within to balance the appearance at night.

The two wings increase interior space at the upper levels. One extension is the top of elevator shafts while the other is a smoke evacuation tower for fire-fighting.
A glass pyramid cap sits at the top and encloses red aircraft warning light and the brighter seasonal beacon. 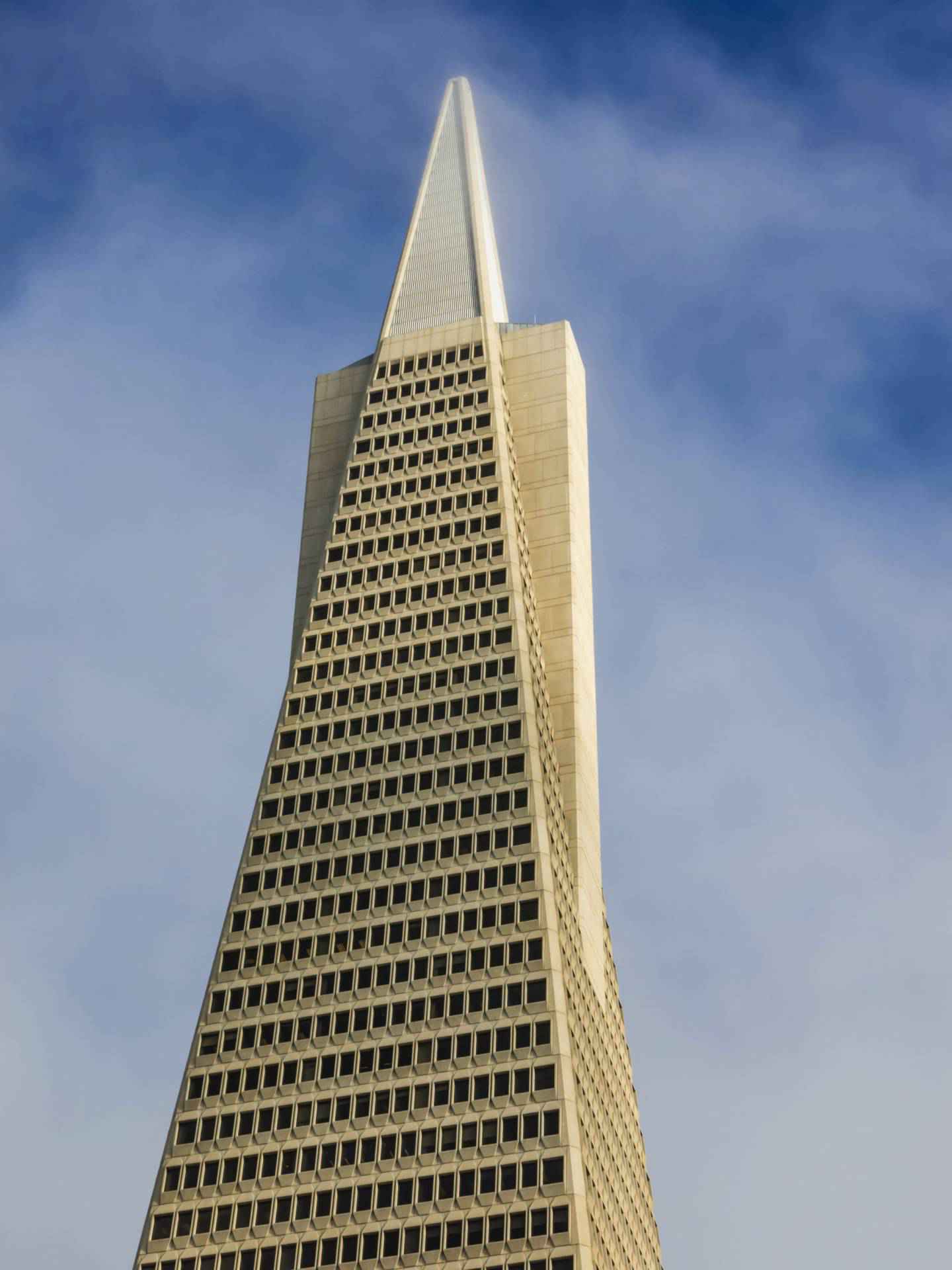