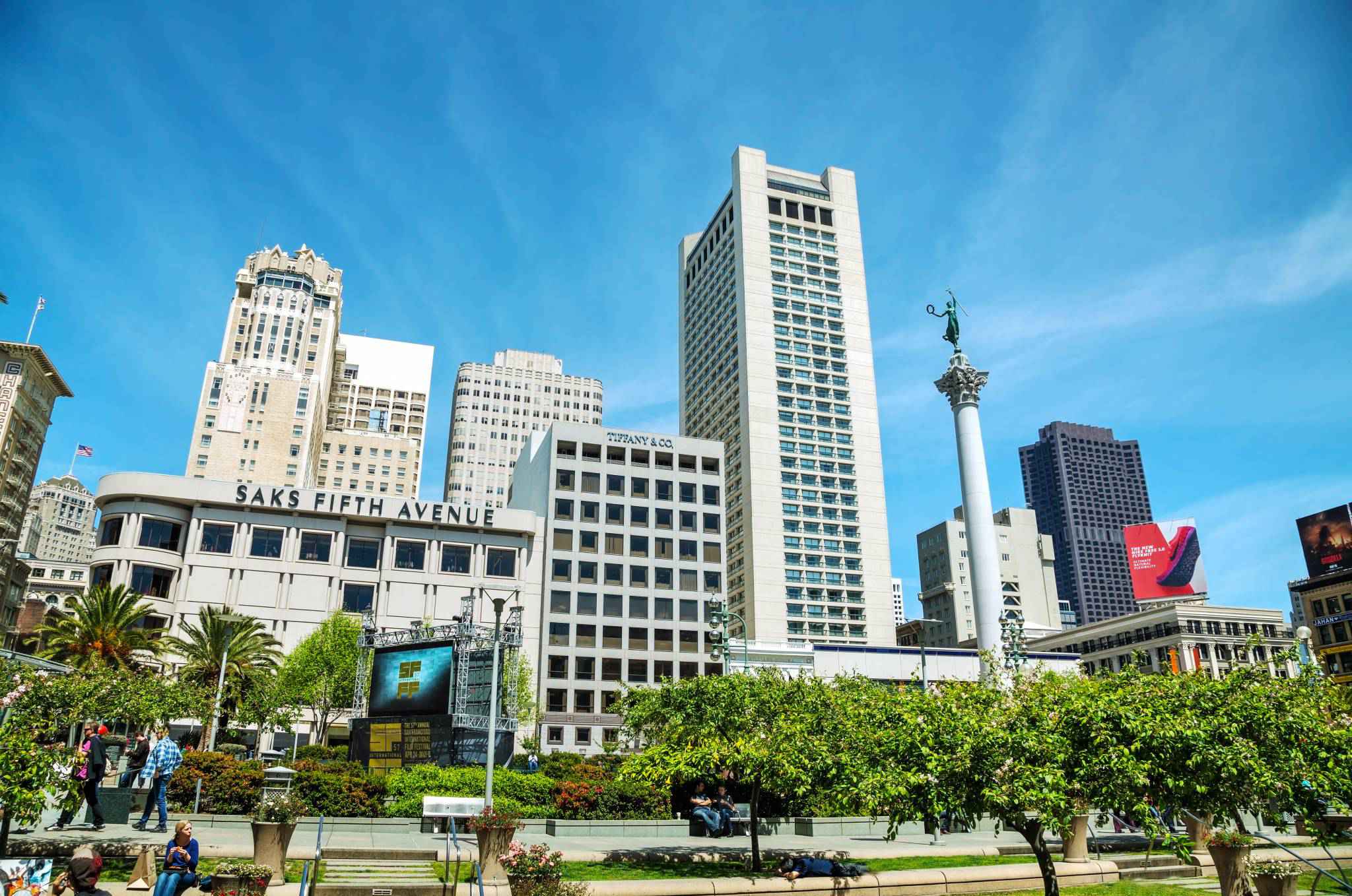 Union Square is a 2.6-acre public plaza bordered by Geary, Powell, Post and Stockton Streets in downtown San Francisco, California. "Union Square" also refers to the central shopping, hotel, and theater district that surrounds the plaza for several blocks. The area got its name because it was once used for rallies and support for the Union Army during the American Civil War, earning its designation as a California Historical Landmark. Today, this one-block plaza and surrounding area is one of the largest collections of department stores, upscale boutiques, gift shops, art galleries, and beauty salons in the United States, making Union Square a major tourist destination, a vital, cosmopolitan gathering place in downtown San Francisco, and one of the world's premier shopping districts. Grand hotels and small inns, as well as repertory, off-Broadway, and single-act theaters also contribute to the area's dynamic, 24-hour character.

Nearby attractions
Union Square has also come to describe not just the plaza itself, but the general shopping, dining, and theater districts within the surrounding blocks. The Geary and Curran theaters one block west on Geary anchor the "theater district" and border the Tenderloin. Union Square is also home to San Francisco's TIX Bay Area, a half-priced ticket booth and Ticketmaster outlet. Run by Theatre Bay Area, tickets for most of San Francisco's performing arts can be purchased the day of the performance at a discounted rate.
At the end of Powell Street two blocks south, where the cable cars turn around beside Hallidie Plaza at Market Street, is a growing retail corridor that is connected to the SOMA district. Nob Hill, with its grand mansions, apartment buildings and hotels, stands to the northwest of Union Square. Directly northeast is Chinatown, with its famous dragon gate at Grant Avenue and Bush Street.

The city's historic French Quarter northeast of Union Square and centers on the Belden Place alleyway, between Bush and Pine Streets, and Claude Lane off Bush Street. This area has many open-air French Restaurants and Cafes. Every year the area is the site of the boisterous Bastille Day celebration, the nation's largest, and Bush Street is temporarily renamed "Buisson."

Directly east of the Square off of Stockton Street is Maiden Lane, a short and narrow alley of exclusive boutiques and cafes that leads to the Financial District and boasts the Xanadu Gallery, San Francisco's only building designed by Frank Lloyd Wright—with its interior most notable for being the predecessor for New York City's Guggenheim Museum. The square is part of the Barbary Coast Trail, linking many San Francisco landmarks.

Gap Inc., which is headquartered less than a mile away on the Embarcadero, operates multiple flagship and full-line stores for, Gap, Banana Republic, and Old Navy in and around Union Square.

In addition, Union Square is served by many trolley and bus lines and the F Market heritage streetcar. The Muni Metro and BART subway systems both serve the area at nearby Powell Street Station on Market Street. Muni now plans to build an extension of its Muni Metro system to connect Union Square and Chinatown. The extension, known as the Central Subway. 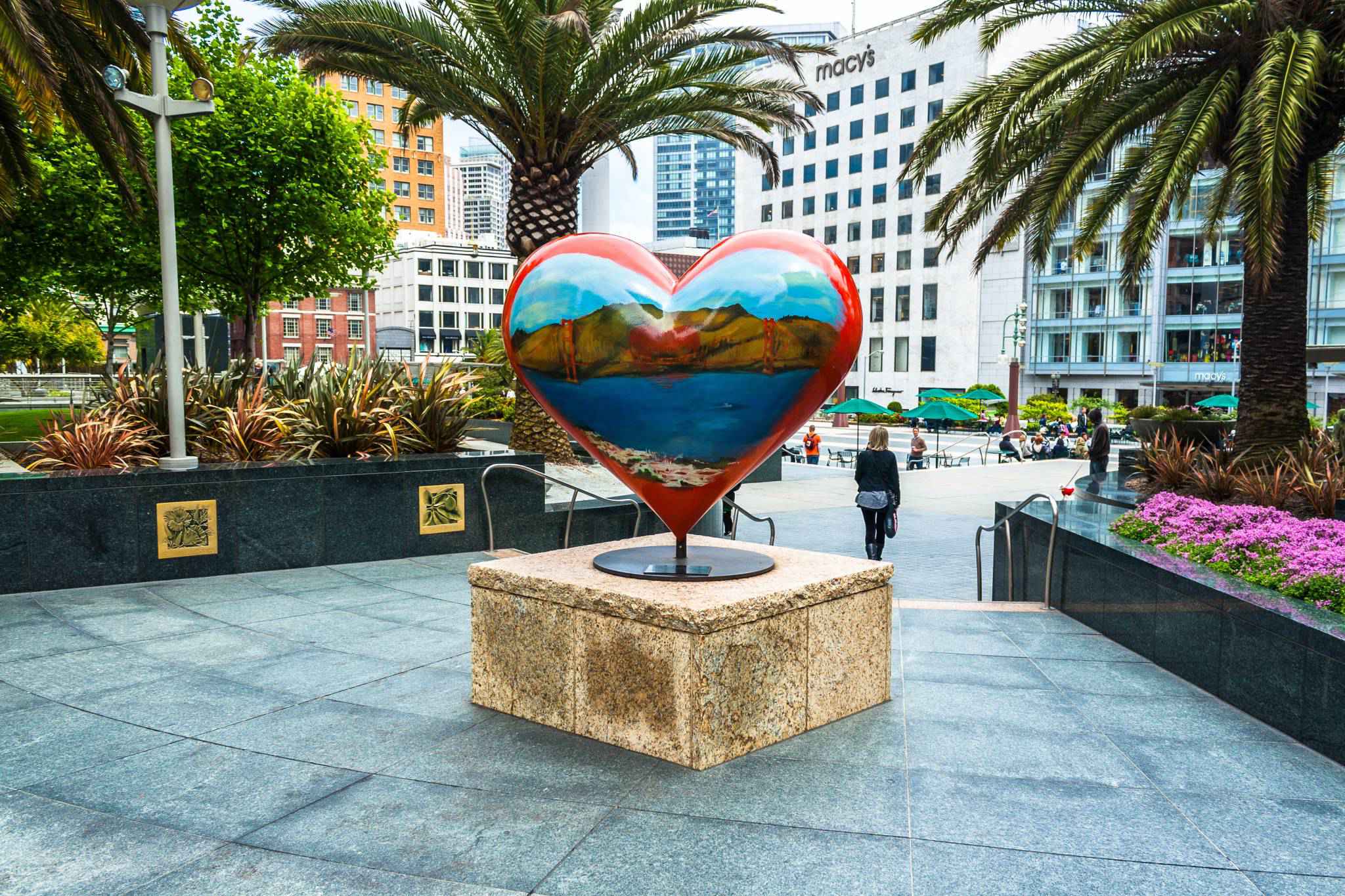