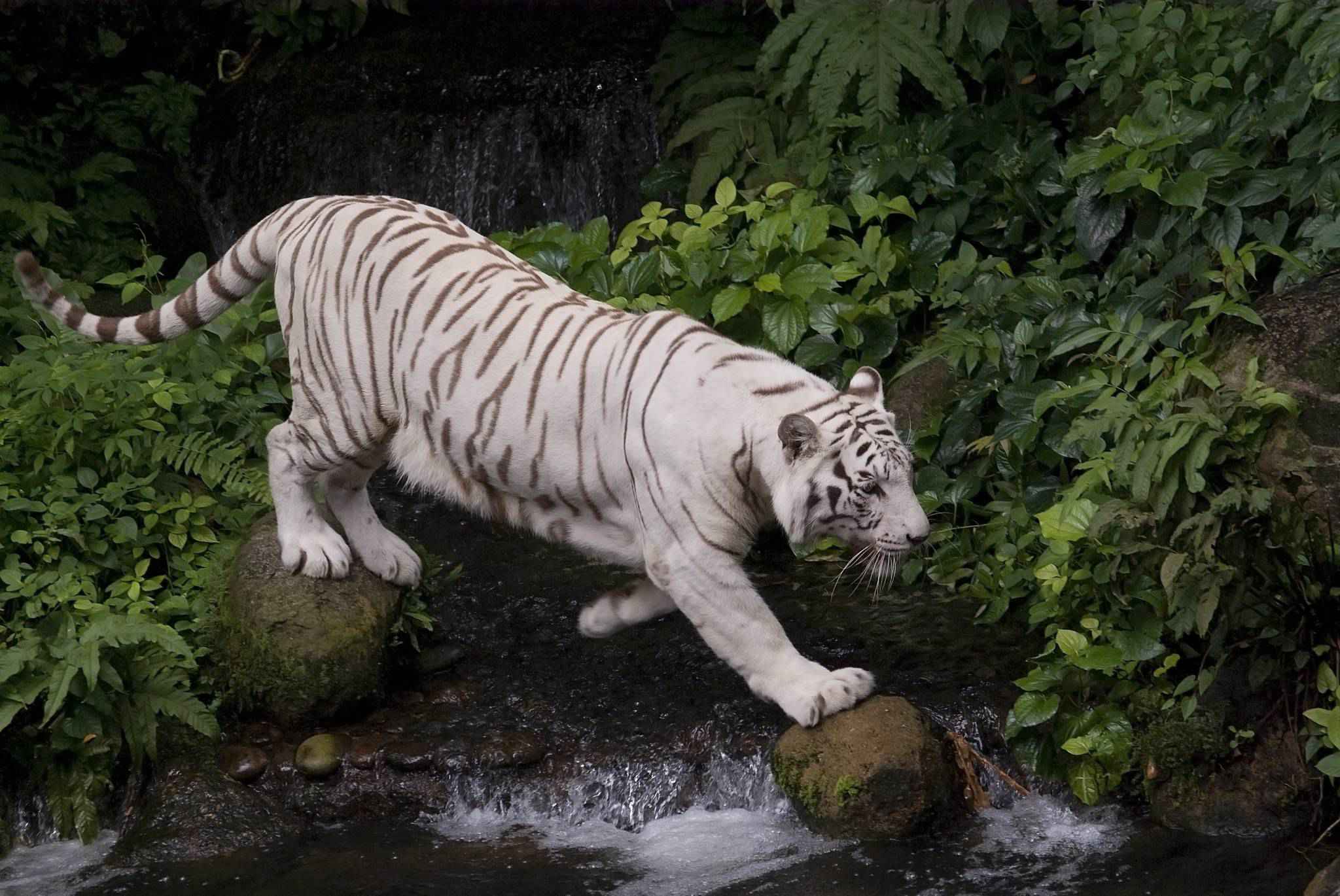 The Singapore Zoo, formerly known as the Singapore Zoological Gardens and commonly known locally as the Mandai Zoo, occupies 28 hectares on the margins of Upper Seletar Reservoir within Singapore's heavily forested central catchment area. The zoo was built at a cost of S$9 million granted by the government of Singapore and opened on 27 June 1973. It is operated by Wildlife Reserves Singapore, who also manage the neighbouring Night Safari, River Safari and the Jurong BirdPark. There are about 315 species of animal in the zoo, of which some 16 percent are considered to be threatened species. The zoo attracts 1.7 million visitors each year.
From the beginning, Singapore Zoo followed the modern trend of displaying animals in naturalistic, 'open' exhibits with hidden barriers, moats, and glass between the animals and visitors. It houses the largest captive colony of orangutans in the world.

Exhibits
Animals are kept in spacious, landscaped enclosures separated from the visitors by dry and wet moats. The moats are concealed with vegetation or dropped below the line of sight. Dangerous animals that can climb well are housed in landscaped glass-fronted enclosures.

The zoo has not expanded beyond the original 28 hectares. However, 40 hectares of secondary forest were later developed into the Night Safari. The remaining undeveloped land has been kept as wooded land. This and the waters of Upper Seletar Reservoir contribute to the zoo, giving it a sense of natural, unrestricted space.
The zoo also offers various modes of rides available within the premises: trams, animals, boat, pony and horse carriage rides.
Strollers, wagons and wheelchairs can also be rented.

Shows
"Breakfast with an Orangutan" allows visitors to meet and interact closely with the orangutans in the zoo, which has included Ah Meng (died on 8 February 2008) who was an icon of the Singapore tourism industry. Animal shows, as well as token feedings coupled with live commentaries by keepers, are also the daily staple in Singapore Zoo.
The "Rainforest Fights Back" show is housed in the Shaw Amphitheatre, the main amphitheatre in the zoo. Actors and performers act alongside the animals: in-show, a villainous poacher attempts to mow down a section of tropical rainforest for land development, and is foiled by the native people and the animals of the rainforest—orangutans, lemurs, pea-fowls, otters and cockatiels.

The "Elephants at Work and Play" show demonstrates how elephants are used as beasts of burden in south-east Asian countries. The animal caretakers are referred to as mahouts, and the show simulates how a mahout would instruct an elephant to transport logs or kneel so that they can be mounted.
The "Splash Safari" show exhibits the zoo's aquatic mammals and birds. Seals and sea lions perform tricks, and pelicans demonstrate how they catch fish in their beaks, while dolphins swim in the pond.

The "Animal Friends" show, housed in the Kidzworld amphitheatre in the zoo's children's section, features mostly domesticated animals such as dogs and parrots performing tricks.