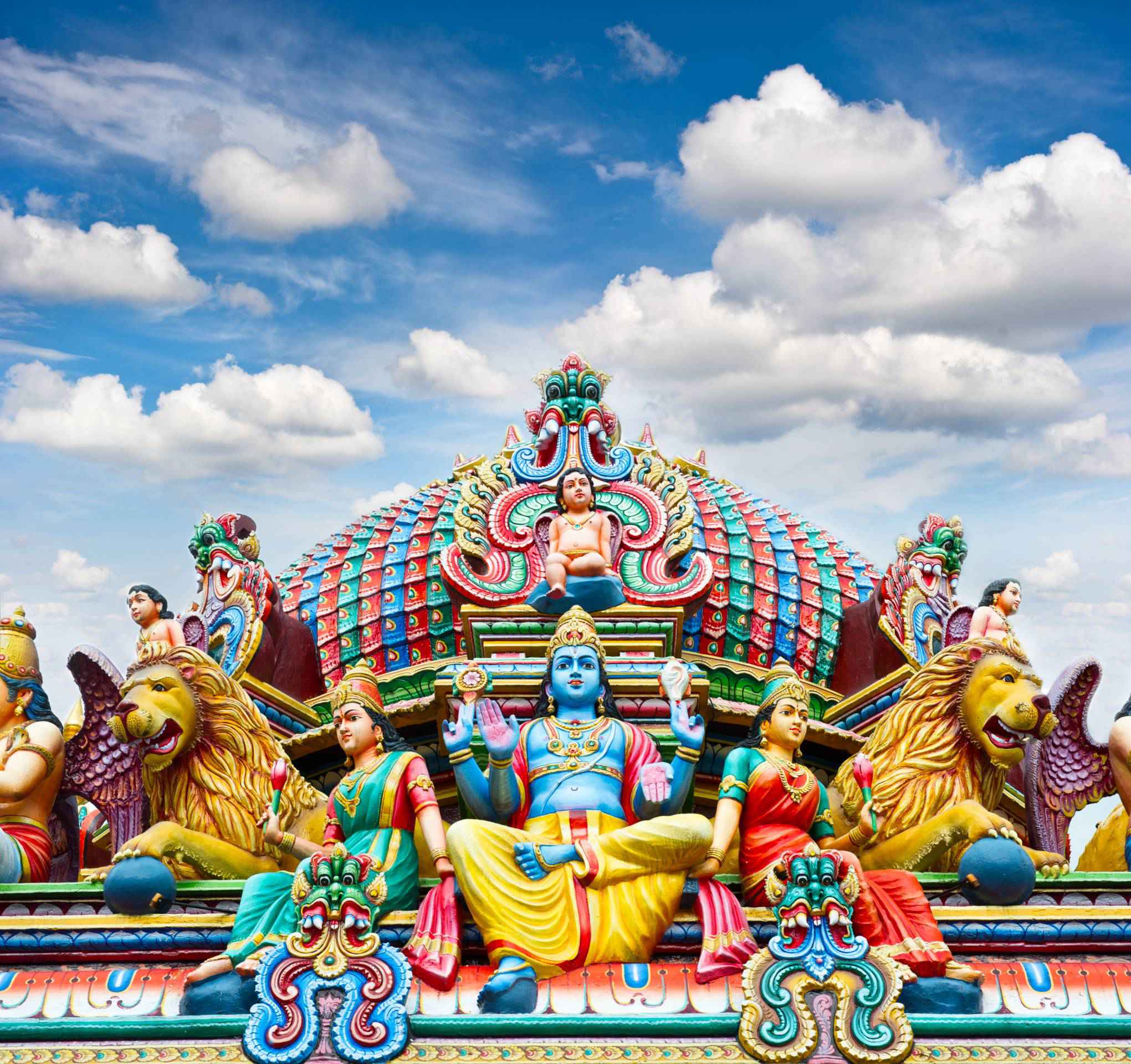 The Sri Mariamman Temple is Singapore's oldest Hindu temple. It is an agamic temple, built in the Dravidian style. Located at 244 South Bridge Road, in the downtown Chinatown district, the temple serves the majority Hindu Singaporeans, Tamilians, in the city-state. Due to its architectural and historical significance, the temple has been gazetted a National Monument and is a major tourist attraction. Sri Mariamman Temple is managed by the Hindu Endowments Board, a statutory board under the Ministry of Community Development, Youth and Sports.

The Sri Mariamman Temple was founded in 1827 by Naraina Pillai, eight years after the East India Company established a trading settlement in Singapore. Pillai was a government clerk from Penang who arrived in Singapore with Sir Stamford Raffles on his second visit to the island in May 1819. Pillai went on to set up the island's first construction company, and also entered the textile trade. He rapidly established himself in business and was identified as a leader of the Indian community.

Art and architecture
Built in the South Indian Dravidian style, this temple features a gopuram that rises above the main entrance along South Bridge Road. It is richly embellished with six tiers of sculptures of Hindu deities, other figures and ornamental decorations. The tower tapers up towards to a moulded ornamental ridge. The scale of each tier and its sculptures is slightly smaller than that of the tier immediately below it. This helps to create the illusion of height and adds to the symbolic importance of the building. Flanking the gopuram are a sculpture of Murugan on the right and Krishna on the left (as one enters). The sculptures are all of plaster, which allows for fine detailing. They are painted in a variety of bright colours, which adds to the visually spectacular quality of the gopuram.

The floor plan of the gopuram base block is rectangular and is bisected by an entrance passageway. The entrance contains a pair of very large double-leaf timber doors. The scale of these doors is intended to induce humility in the visitor and emphasise the diminutive human scale in relation to the divine. The doors are studded with small gold bells arranged in a grid pattern, which devotees are supposed to ring as they move through. Footwear is also stored around the entrance area, as it is not allowed within Hindu temples as a sign of respect.

The main entrance with the gopuram is only one of the entrances into the temple compound, which is surrounded by a perimeter wall. Side openings also exist, which open on to the flanking Pagoda Street and Temple Street. However, these are mainly used as service entrances, with all devotees and visitors entering through the gopuram doors. The compound wall is also decorated with ornamental mouldings, as well as figures placed on top of the wall at various points, including several prominent seated cow sculptures.
Within the walled compound, the temple comprises a combination of covered halls, shrines and service areas, as well as courtyards open to the sky. Leading directly from the gopuram entrance through a covered hall is the main prayer area, with richly ornamented columns and ceilings with frescoes. The ceiling paintings include a large mandala diagram.

Shrines and deities
The focus of the main prayer hall is the central shrine of Mariamman, which is flanked by the shrines of two secondary deities, Rama and Murugan. The main prayer hall is surrounded by a series of free-standing shrines, housed in pavilion-like structures with decorated dome roofs, known as Vimana. These are dedicated to the following deities: Durga, Ganesh, and Shiva.

The shrine to Draupadi is the second most important in the temple, as she is central to the annual timiti or firewalking festival held in this temple. To the left of Draupadi are the five Pandavas from the Mahabharata epic – Yudhishthira, Bhima, Arjuna, Sahadeva and Nakula. They are presided over by Lord Krishna.
Another important element of the temple is the free-standing flagpole. A few days before major festivals or ritual ceremonies, a flag is raised here. 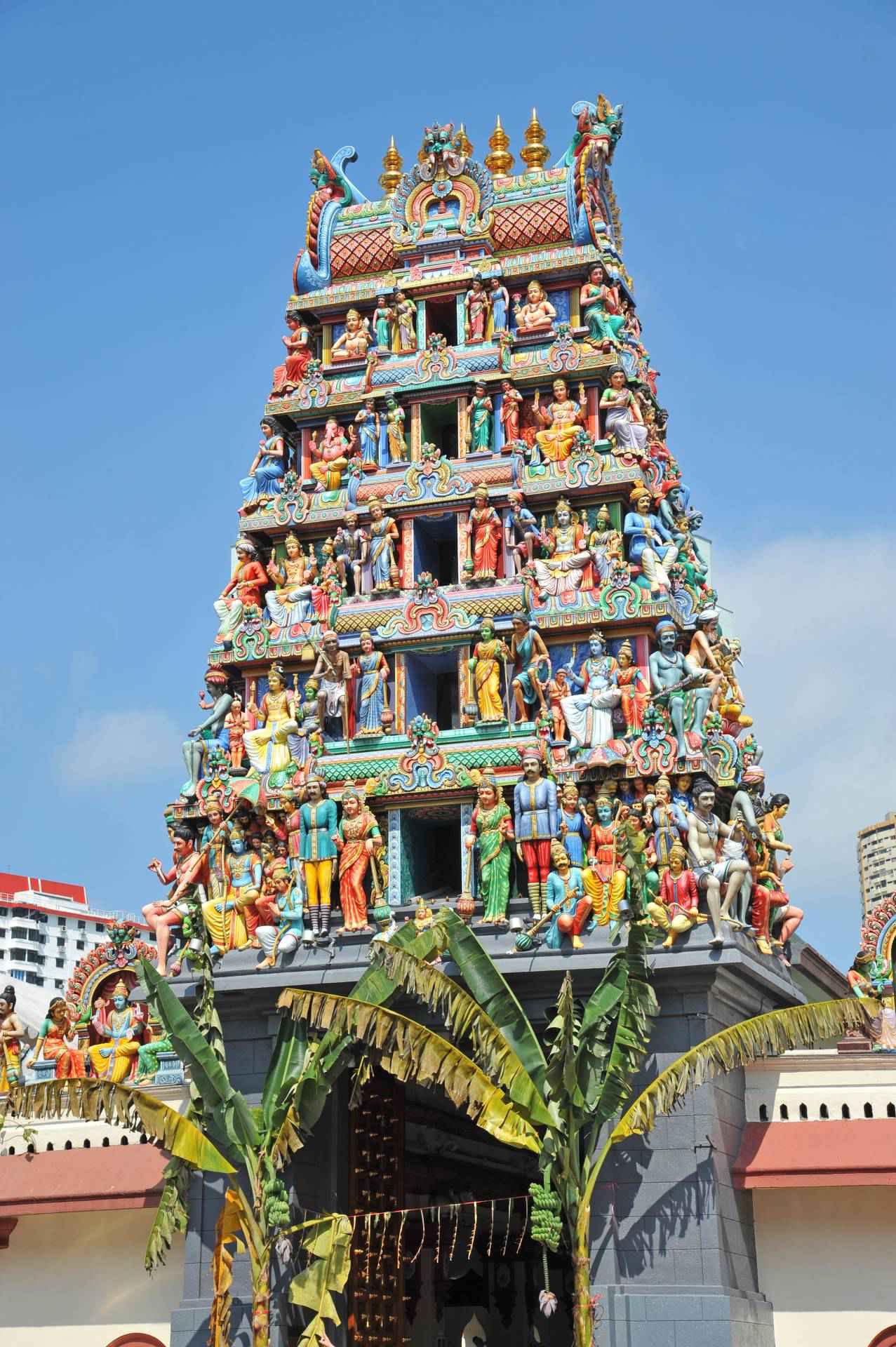