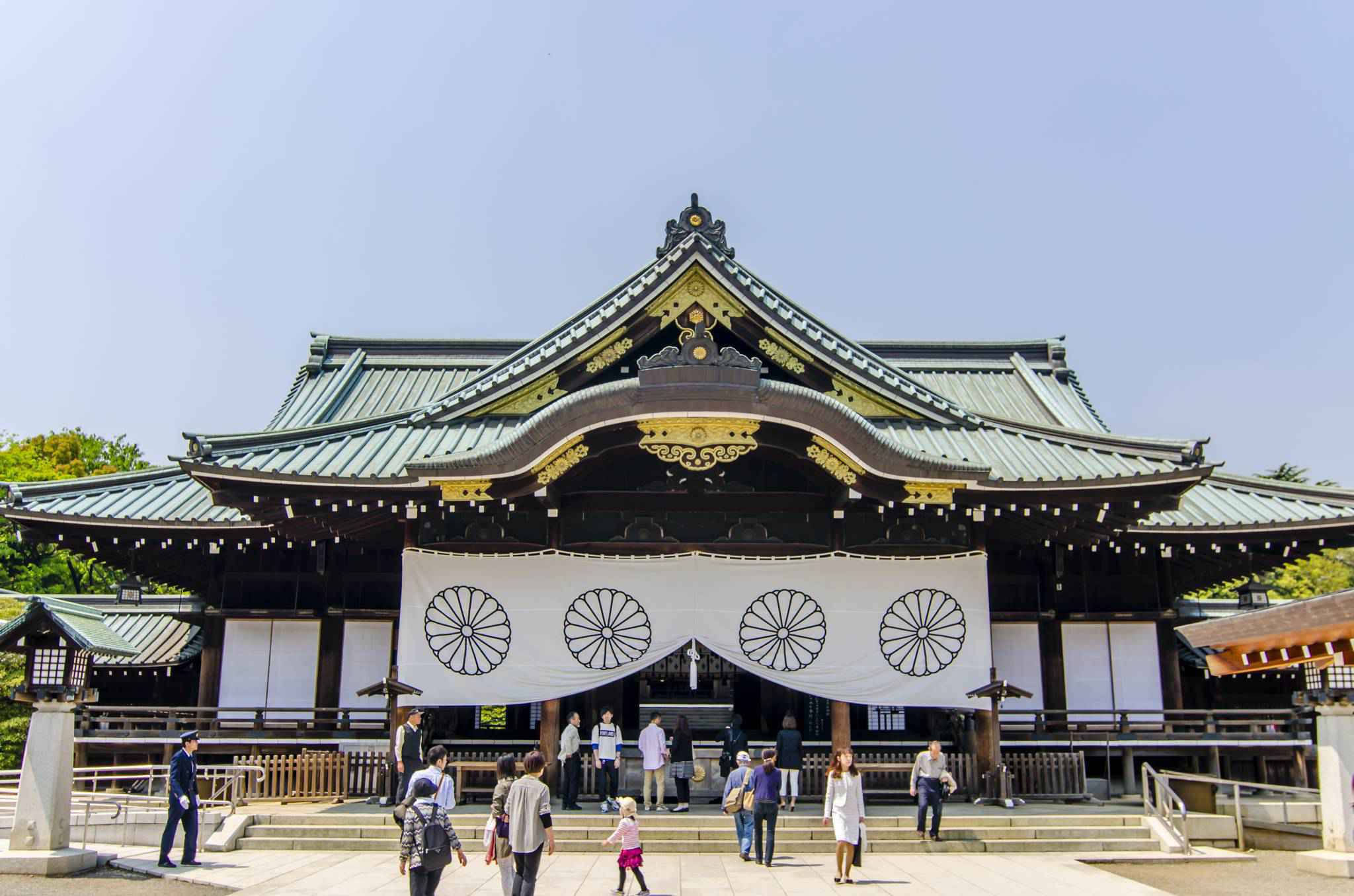 The Imperial Shrine of Yasukuni, informally known as the Yasukuni Shrine (靖国神社 or 靖國神社 Yasukuni Jinja), is a Shinto shrine located in Chiyoda, Tokyo, Japan. It was founded by Emperor Meiji and commemorates those who died in service of the Empire of Japan, which existed from the Meiji Restoration of 1869 until the nation was renamed during the Allied occupation in 1947. The shrine's purpose has been expanded over the years to include those who died in the wars involving Japan spanning from the entire Meiji and Taishō period, and lesser part of the Shōwa period.

The shrine lists the names, origins, birthdates, and places of death of 2,466,532 people and animals. Among those are 1,068 considered war criminals, 14 of whom are considered A-Class (leading to the Yasukuni controversies). Another memorial at the Honden building commemorates anyone who died on behalf of the Japanese empire, but includes Koreans and Taiwanese who served Japan at the time. In addition, the Chinreisha building is a shrine built to inter the souls of all the people who died during WWII, regardless of their nationality. it is located directly south of the Yasukuni Honden.

Shrine structures
On the shrine grounds, there are several important religious structures. The shrine's haiden, Yasukuni's main prayer hall where worshipers come to pray, was originally built in 1901 in styles of Irimoya-zukuri, Hirairi, and Doubanbuki (copper roofing) in order to allow patrons to pay their respects and make offerings. This building's roof was renovated in 1989. The white screens hanging off the ceiling are changed to purple ones on ceremonial occasions.

The honden is the main shrine where Yasukuni's enshrined deities reside. Built in 1872 and refurbished in 1989, it is where the shrine's priests perform Shinto rituals. The building is generally closed to the public.

The building located on the right side of haiden is the Sanshuden (参集殿) (Assembly Hall), which was rebuilt in 2004. Reception and waiting rooms are available for individuals and groups who wish to worship in the Main Shrine.

The building located directly behind the honden is known as the Reijibo Hōanden (霊璽簿奉安殿) (Repository for the Symbolic Registers of Divinities) built in styles of Kirizuma-zukuri, Hirairi, and Doubanbuki. It houses the Symbolic Registry of Divinities (霊璽簿 Reijibo)—a handmade Japanese paper document that lists the names of all the kami enshrined and worshiped at Yasukuni Shrine. It was built of quakeproof concrete in 1972 with a private donation from Emperor Hirohito.

In addition to Yasukuni's main shrine buildings, there are also two peripheral shrines located on the precinct. Motomiya (元宮) is a small shrine that was first established in Kyoto by sympathizers of the imperial loyalists that were killed during the early weeks of the civil war that erupted during the Meiji Restoration. Seventy years later, in 1931, it was moved directly south of Yasukuni Shrine's honden. Its name, Motomiya ("Original Shrine"), references the fact that it was essentially a prototype for the current Yasukuni Shrine. The second peripheral shrine is the Chinreisha. This small shrine was constructed in 1965, directly south of the Motomiya. It is dedicated to those not enshrined in the honden—those killed by wars or incidents worldwide, regardless of nationality. It has a festival on July 13.

Torii and Mon (gates)
There are several different torii and mon (門) gates located on both the causeway and shrine grounds. When moving through the grounds from east to west, the first torii visitors encounter is the Daiichi Torii (Ōtorii). This large steel structure was the largest torii in Japan when it was first erected in 1921 to mark the main entrance to the shrine. It stands approximately 25 meters tall and 34 meters wide and is the first torii. The current iteration of this torii was erected in 1974 after the original was removed in 1943 due to weather damage.

The Daini Torii (Seidō Ōtorii) is the second torii encountered on the westward walk to the shrine. It was erected in 1887 to replace a wooden one which had been erected earlier. This is the largest bronze torii in Japan. Immediately following the Daini Torii is the shinmon (神門). A 6-meter tall hinoki cypress gate, it was first built in 1934 and restored in 1994. Each of its two doors bears a Chrysanthemum Crest measuring 1.5 meters in diameter. West of this gate is the Chumon Torii (中門鳥居) (Third Shrine Gate), the last torii visitors must pass underneath before reaching Yasukuni's haiden.

In addition to the three torii and one gate that lead to the main shrine complex, there are a few others that mark other entrances to the shrine grounds. The Ishi Torii is a large stone torii located on the south end of the main causeway. It was erected in 1932 and marks the entrance to the parking lots. The Kitamon and Minamimon are two areas that mark the north and south entrances, respectively, into the Yasukuni Shrine complex. The Minamimon is marked by a small wooden gateway.

Sumo Ring (Sumōjō (相撲場)): In 1869, a sumo wrestling exhibition was held at Yasukuni Shrine in order to celebrate the shrine's establishment. Since then, exhibitions involving many professional sumo wrestlers, including several grand champions (yokozuna) take place at the Spring Festival almost every year. The matches are free of charge.